Say hi to the Culinary Sherpas! They really took full advantage of the Adult Language nature of TNS, and in fact are really quite blue, so we’ll have to add a Nudity warning as well. When you’re done, why not read the past batch of guest posts from other kick-ass bloggers,? (If you’re wondering why all the guests: go here.) And remember: Hobo Monday is STILL ON for the rest of you.  I’ll be back full-time on Thursday.

We’re supposed to say hi and tell who we are and all that so you know that it’s not really Michelle writing as an alter personality due to a super medicated brain, because who the fuck knows if Michelle is really Michelle or if she’s really a dude named Fawnd pretending to be a woman so that “she” can lure little boys into “her” West Virginia Hattfield-ish trailer*. This IS the blogosphere, people.

* I mean really, for all we know “Brian” is just one of “Michelle’s” alters, although I think having sex with ones self would be difficult. Nope, scratch that, I have the Jack Rabbit, too.

So, my name is Michelle, too, and I am a Sherpa of the Culinary persuasion. When we (there are two Sherpas) got the email about guest blogging for TNS, we couldn’t wait, because we have the ultimate good ass recipe, that and we love adore want to bed appreciate TNS. There is just one problem. We started drinking at 4pm and I didn’t even attempt to make food until 9pm, which means by the time the shit was done, I was hammered**. 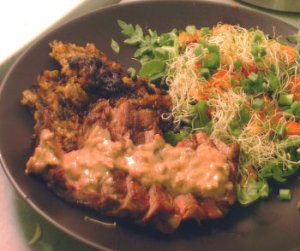 I must have taken at least forty friggin pictures of the shit and it still looks like ass (shoulda put some chive on the bitch), but trust me people. You want to make this. It is good and it is simple and it is lovely and it is cheap and it is as French as your Yankees asses can get. 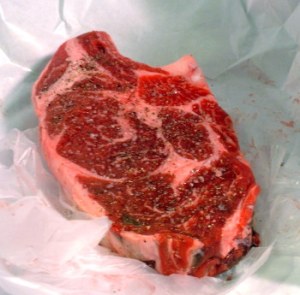 ** Hammered and photography don’t mix. Cooking, no problem. Most chefs are hammered in the kitchen but photography with my squirrel-powered camera is a difficult task, but what do you care? Your getting a good ass recipe for FREE, you social leach. Just kidding, I love you.

I am all about French food lately. I think its because I long to go there, but must pay my mortgage instead and I’ve never really been one who likes it when I am given ultimatums. So I have been trying to extinguish this yearning to throw double deuces to the bank and hop the next flight to Provence.

Luckily, Greg (the other Sherpa) went to culinary school and learned French technique and has a more grounded head on his shoulders…sometimes. Unlucky for him, he married me and I rarely listen to him. But sometimes I do and as much as I hate to admit it, he’s typically right. (I said typically right, Greg. Don’t go getting ready for the BJ just yet.***). So, I listened to his advice when I screwed up the recipe and it took me at least an hour longer to correct my mistake, allowing even more time to drink wine. You, however, have the recipe in front of you and will not be at least a bottle and a half into Barefoot’s Red Zin. (Don’t judge my swill wine, it got 90 points in Wine Spectator. And that ain’t bad at $13.99 for a liter bottle) 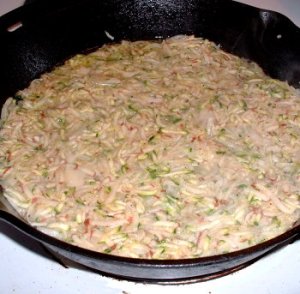 *** Greg and I have a deal that when the day comes that he is always right, will be the day that he gets a blow job everyday, which will probably be when hell freezes over.

I paired up the recipe with a grass fed rib-eye because it was on sale for $7.99 lb. Yep, $7.99. I TOTALLY think the butcher goofed or I fed myself and my husband tainted beef, regardless, when the good shit is on sale we buy it because we are poor crackers. I just grilled the steak and concocted a little dijon sauce. Pretty easy, shallots, garlic, splash of red wine (because it was in my hand) and about 4 tbsp dijon. Add a little stock (3 tbsp), reduce and voila, you’ve got a good ass dijon steak sauce, which pairs perfectly with this Provence side. Most Provencal peeps don’t eat zuchinni because they think of it as a bi-product for the heavenly squash blossom (which I have been trying to get for fucking ever without buying a case of the shit), but when they do, they do it right.

Using a food processor with the grating disk, grate all veggies separately. In batches, wrap potatoes in cheese cloth (or just use your hands) and squeeze the ever loving piss out them to drain all of the excess liquid****, but being careful not to completely crush them.

Mix all the shredded veggies add salt and pepper to taste. Bring an oven safe non-stick sauté pan to high heat and add 2 tbsp butter and 2 tbsp olive oil. Quickly add shredded veggies. Using a spatula, press mix down to completely cover the bottom of the pan. Reduce heat to medium and continue to SMACK DOWN the mix with the spatula. Cook for about 15 minutes or until the bottom has formed a nice golden crust. Meanwhile preheat broiler to 400 degrees. Scatter remaining butter*****, across the top of the mix and put under broiler for 4-6 minutes, just until the top becomes golden. Remove from oven and slide cake onto a plate.

****This would be the step I neglected to perform, because I was hammered and forgot how much freaking water comes out of potatoes.

*****What the fuck? The French LOVE their butter, yet they don’t have American sized thighs?

7 thoughts on “Get Your French On, Bitches.”