Granted, instructional Chinese food public television programming is a bit of a niche market, so that’s kinda like calling my only brother my favorite brother, but it does not diminish the warm fuzzies he inspires. (Martin Yan, I mean. My brother does not generally inspire the warm fuzzies, although he does remain my favorite brother.  I mean it.) 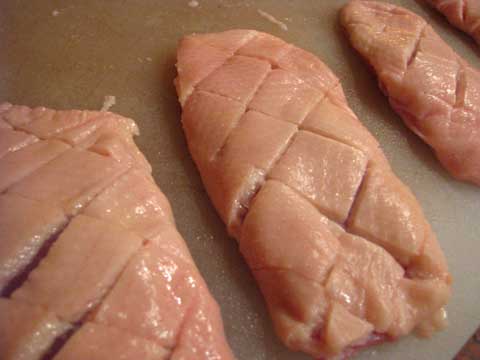 I will continue to trust Martin Yan even though he tried to kill me tonight with this wok-braised duck in chile-beer sauce, again from Chinatown Cooking.  It’s inspired by Melbourne’s Chinatown, where the drunken Australians can’t even keep beer out of their Chinese food.  I guess you can’t expect much more from a nation of criminals.*

Looking at the above photo, one might assume that he tried to kill me with an instant heart attack, because Holy Jesus, Mary and all the saints, look at the amount of fat on those duck breasts.  Actually, he tried to kill me with Szechuan peppercorns.  Taking another look at that duck, however, it occurs to me that he may be a bit of a prankster: he knows the peppercorns will only feel like death, I’ll think like I’ve escaped the reaper’s clutches, and then I’ll die of a heart attack in my sleep.  If you don’t see me around responding to comments tomorrow, tell my brother and sister I love them and then plan a giant fucking funeral pig roast and take turns pouring bottles of Belgian beer, which everyone knows are the best of all possible beers, on my grave while blasting Boston’s “More Than a Feeling.”  Depending on how many people are engaged in fallen homie beer-pouring and how long it takes, you may also opt to play A-Ha’s “Take On Me,”**.  My brother-in-law could sabre the beer bottles open, which would officially make my funeral the coolest funeral ever.  Let the earth be saturated with Corsendonk!

*That will never stop being funny to me.  Ever.  Sorry, Australia.

**Yes, I have an unnatural love of both those songs and no, I am not ashamed.  If you don’t like “More Than a Feeling,” then there’s something wrong with YOU.  As in, you have no heart.

Because seriously, look at the depth of that fat.  All the fat in the pan?  That’s maybe a quarter of an inch deep? None of that was there before those duck breasts hit the pan.  And there could have been more, had I not removed the duck to keep it from going past medium.  Still, there’s enough leftover fat to make duck-fat potatoes for brunch this weekend, so all’s well that ends well.

Or…is this part of Yan’s plan?  The fat doesn’t kill you immediately, either via heart attack or third-degree burns*, it kills you several days later?  Is Martin Yan not actually the lovable Bob Ross figure?  Could you pull off his Yan mask and find a hoary old man cursing about how he would have gotten away with it if it weren’t for these damn kids?  Does Ming Tsai know this, and if so, why has has done nothing about it?  Probably he’s scared.

That could all be true, along with many thousands of other terrible things that could be true but are not.  Let us not dwell on potential true untruths, or what might happen three days from now.  I could step off the curb tomorrow and get hit by a duck delivery truck.**  But right now, in front of me, there is duck in chile-beer sauce.  And even though it did literally try to choke the life out me, it was good. Damn good.

*Do you know how far sizzling, highly motivated duck fat can launch itself from a hot pan?  I do, and it’s upwards of several feet. You may want to consider protective gear.

**If I were Alanis Morisette, I would call this “ironic,” because I would not understand the definition of “ironic.”  Me, I call it “a thing that really sucks ass.”

The seared duck was resting, waiting to be sliced and tossed into the pan after some aromatics and veggies, seen above in Fig. 5a, were quickly cooked.   I took the time to prepare my mis in place, getting everything cleaned and diced and ready to go.  Once things get going they get going fast, so you best be prepared; Martin and his wok wait for no one.

I also threw the beer sauce together.  There’s no photo of that because it’s just a bowl of brown liquid, and I’m not at the stage of photographic prowess where I can make a bowl of brown liquid look good.  In fact, I seem to be firmly stuck at the “I know how to use the macro setting on my point-and-shoot and can adjust the contrast  in Photoshop” stage of my photographic development.  This is the #2 reason that I will never be Smitten Kitchen, the #1 reason being that she is a better cook.

Since there’s no photo to go on, I’ll paint you a picture with my extraordinary wordsmithery:  Simmered beer (to make it flat).  Soy sauce.  Hoisin.  Mirin.  Salt.  Chicken stock. In a bowl.  Whisked together.  End result: bowl of brown liquid.  Do you not feel transported to my kitchen?  Your problem.  If it helps:  it was a small glass bowl.

Oh wait, there was one other ingredient.

Merely ground, they’re bad enough.  To accidentally inhale a particle or two is to have your sinus cavities invaded by a thousand tiny creatures with tiny pickaxes and a tremendous amount of excess energy, which is, naturally, funneled into increasingly manic pickaxing.

Even though the sensation itself is EVIL, I like to imagine that the tiny creatures look like doozers.  (This thought is somewhat calming.)

This happened the last time I used them so I wasn’t surprised, but then Martin added a horrific new dimension to the pain: toasting. To toast them, thus forcing you to accidentally inhale a particle or two while also releasing the venomous oils they contain, is to suddenly develop severe emphysema. And since the smell permeates your house, there is no escape save the sweet release of death. Szechuan peppercorns + hot pan = FAIL for your lungs. And your sinuses.  And your esophagus. And probably additional internal organs that you don’t even know have been affected.

Yes, there was hot pan/peppercorn contact the last time I used them, and I complained about it then because I’m a complainer.  That time, however, there were countervailing factors that kept me from understanding the full extent of the pain: the lovely smell of toasted fennel seed, the sweet smell of red onion jam that had been cooking for an hour or so, its scent taking up valuable nasal real estate and keeping the peppercorns from completely taking over.  This time, no such luck, and I can only hope that liveblogging Hell’s Kitchen tomorrow night won’t be too hard from the Iron Lung in which I’ll be encased.  Looking back at the last Szechuan peppercorn experience, it was like having a picnic in Central Park on a bucolic spring day. 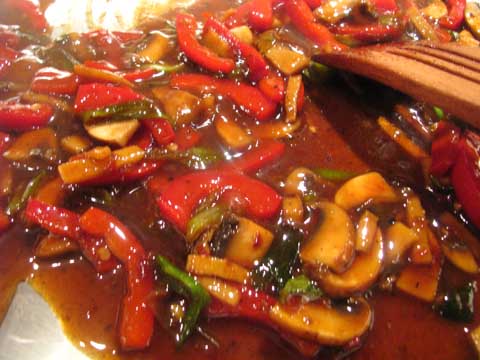 You’d think – at least, you’d hope – that once the peppercorns were mixed into the beer sauce, which goes into the pan with the bell peppers and mushrooms after some fresh ginger and scallion have been quickly sauteed*, that they would be somewhat tempered by the other flavors.  You would be wrong for a number of reasons, the main ones being that (1) the particles are already lodged in your lungs and are probably permeating your bloodstream and heading for your heart and (2) you would have added a full tablespoon of chile-garlic sauce to the stir fry, thus compounding the number of spiciness particles careening around your kitchen.

*Yes, I still have no wok.  So fine, it’s saute pan braised duck breast.  Fuck you.

We got a brief respite when the pan was covered to help the veggies cook through in the simmering sauce; this briefly trapped any remaining spice particles under the lid where they couldn’t make a break for it.  During this time of relative tranquility, I sliced my now-cooled duck breasts and added them to the mix. (This is the “braise”, and a questionable one at that since the duck is already cooked.)  I ate the crispy and fattiest little end bits – cook’s privileges.  You would have done the same, if only to pre-coat your tongue in a layer of fat in preparation for the oncoming flavor juggernaut.

I also set a pot of water to boil for udon.  There was no suggested pairing for this, so I’d planned on simply serving it over rice.  While I was picking up some of the ingredients after work, I noticed that the bodega had packets of fresh udon.  Not only do I heart udon, but I had a feeling that the thick, chewy noodles would help tame the spice level of the duck better than plain ol’ rice.

My intuition rules; udon was totally the right way to go.

Even though this dish exceeded my heat tolerance level by a step or two, it wasn’t so spicy that the flavor was lost.  This man knows how to make a sauce and pair ingredients.

So it was hot, obviously, really hot, with the immediate punch of the peppercorns followed by the slower burn of the chile-garlic paste.  The sauce tempered this with the sweetness of hoisin and the salty soy, while the beer provided a somewhat neutral backdrop that still managed to deepen the flavor – it didn’t taste like beer, but I’m guessing that the malty sweetness of the flat beer gave the sauce some needed backbone. If I make this again – and I will, although probably not with duck – I’ll probably add a hint more sweetness with more hoisin or some plum sauce and maybe a hit of acid at the very end to bring everything into a balance that’s more comfortable for my delicate palate, but I won’t reduce the heat.

The mix of aromatics, veggies and duck was similarly inspired.  The red peppers added another layer of sweetness, required to offset the heat, and the rich, fatty duck was able to stand up to the incredibly assertive sauce.  The bites of ginger were occasional little bursts of much-welcomed brightness.

ONE YEAR AGO: An indulgence, a farewell and some udon.  (Yes, udon.  TOTAL COINCIDENCE.)

0 thoughts on “It's-Not-Thursday-Night Smackdown: Smoked Out”