I feel like I have to get all pasta-related Cheap Ass meals in in March, because of my own self-imposed “no pasta” rule for April’s Recession Special: Hobo Mondays.  Also, I needed something I could make relatively quickly after I got buried under a pile of work that kept me at the office roughly ten thousand hours longer than I’d planned and I needed to produce some food before Brian left for band practice at 8:15 because otherwise I get 3 housefrau demerits.  I already have nearly a thousand and that’s when they take your strand of pearls away, so I have to tread carefully.

Literally, ten thousand hours.  Wait, is that not possible?  I have been thoroughly misled as to the definition of literally!  Americans and your horrific command of the rules of grammar, I wag my finger at you for leading me down this path.  Before you know it will be acceptable to end sentences with prepositions, at which point I will have no option but samurai-style seppuku. Wait, it already is?  HOLY SHIT. PULL YOURSELF TOGETHER, AMERICA. Truly, we are a nation without shame. Now, go get a dictionary and look up the words “figuratively” and “metaphorically.”  Please leave a comment in which you use them properly in a sentence so I know you can be trusted.

Sorry.  Grammar.  Eggs.  Roman-style pasta cacio e pepe. Not related, I know.  I just get a little testy; and here I was, thinking I was so civilized as I blog with Vivaldi’s Four Seasons on in the background instead of an America’s Top Model mararthon.

Anyway:  Pasta.  Quick and easy.  A Roman classic.  If you’ve ever been to Rome, you must have eaten this (if you didn’t, you should probably ask yourself: was I really in Rome, or was that a dream I had?), and it will transport you back to the trattoria at which you ate it.  If you’ve never been to Rome, you should make this, eat it while looking at a picture of Rome and then start saving your money for a plane ticket.  You’ll be able to do that, since this meal costs negative dollars to produce.  With the current exchange rate, I believe that’s equivalent to absolute zero Euros.

Cacio e pepe is, literally, cheese and pepper.  That’s it.  And with good ingredients, that’s all you need:  some salty, ever-so-slightly funky pecorino, some biting but slightly floral freshly cracked black pepper, a little butter and olive oil and pasta.  Combined with some of the pasta cooking water – I remembered to save it! – the cheese melts into a silky sauce that totally fools you into thinking it contains cream.

I boiled up some linguini, and while they drained tossed a little butter, some olive oil and pepper into the hot cooking pot.  I added the hot pasta back, and started tossing.  (There’s a lot of tossing, so be prepared.) 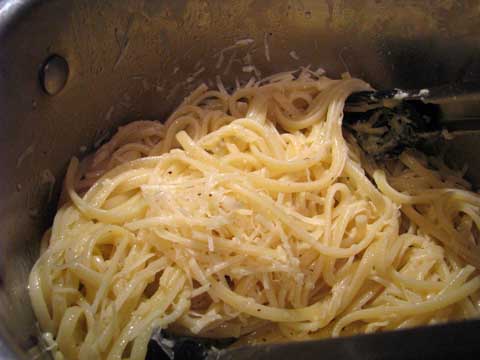 Next, I added some more pepper (it just didn’t look like there was enough), the cheese and some pasta water and tossed, tossed, tossed.

I am deeply ashamed of the cheese that I used. I mean, it wasn’t like the shaker-cheese-that-shall-not-be-named, the one in the green canister.  But it was pre-grated, and not of the highest quality.  Since there are so few ingredients in the dish, I’d wanted really good cheese, but the whole ten thousand hours at work* prevented me from having time to walk down to Whole Foods or hopping a train to Murray‘s to pick up some good stuff. It was probably just as well, as I am incapable of going to Murray’s and not blowing my entire month’s food budget, but it did mean inferior cheese.  Still, it was salty and had an acceptable amount of funk, so I managed to work through the pre-gratedness.

While I was tossing – not vigorously enough apparently – some of the cheese glommed together into a scary looking mass nearly 2 inches in diameter.  I dared Brian to eat it and am still a little shocked and disappointed that he didn’t.  I mean, we’re talking about a man who once took a fried mushroom cap, removed the mushroom, filled the remaining cup-shaped fried thing with ranch dressing and ate it.  In public.  As a grown up.

Not only did I have the foresight to save some pasta water, but I ALSO thought to put the pasta serving bowls in the warming drawer to heat a little before dinner.  That ought to get me a few hausfrau points back, so my grip on the pearls is slightly less tenuous.  I also tried to make cute little nests out of the pasta, with varying degrees of success (i.e., none).

Cacio e pepe, delicious as it is, is just pasta and will leave you hungry shortly after you’ve eaten it unless you eat more of it than you really should.  So I decided to use my MAD EGG-POACHING SKILLZ to add a little protein, because runny egg yolk mixed into warm cheesy pasta is one of the most wonderful things ever.  Also because I love to poach eggs.  That is the manner in which I roll. 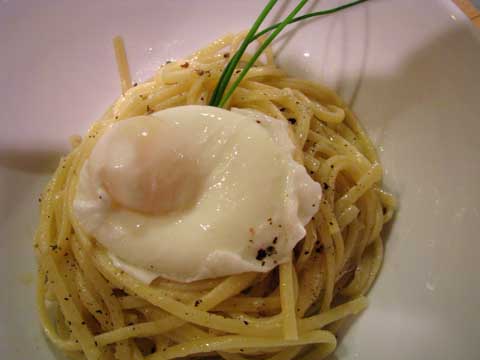 The end product could be cacio e pepe, or it could be a really stripped-down carbonara (which has the egg and cheese but also bacon and onions, possibly making it the superior dish).  My verdict: Who gives a flying fuck if it tastes good, as this did?  The cheese and pasta water combined, as they have since time immemorial, to produce a shockingly creamy sauce.  The salty cheese and crunchy flecks of pepper played perfectly off one another.  The egg, once smooshed into the pasta, added to the silky consistency as the runny yolk coated the linguini  The chives were a useless garnish used only for color contrast purposes, as is their main use in cookery (although Brian chopped his into the pasta and was quite the fan).

I can’t help but feel a little sad when I eat meals like this, because it reminds me that the entire maternal side of my family is in southern Italy and I am in New Jersey, and I’m too fricking broke to go see them; it’s been almost 4 years.  I mean, I would miss them regardless of the too-expensive-to-get-to locale in which they lived, so the whole southern Italy v. New Jersey thing is just a little salt in the wound.  Since my mom’s gone, I’m the sole American outpost of the Giannachi family, and it can be a little tough, especially since my stupid brother and sister also fled the state. (Technically, half-brother and sister – although I’ve never thought of them that way – so they don’t carry the weight of the Giannachi line.  There are a lot of cousins, so that weight is not inconsiderable).

It will take me literally a million years to save up the money to visit again. LITERALLY.

Thus, I must console myself with the gelato that awaits me in the freezer.  I think it will help, since it’s the best of all possible gelato flavors: hazelnut.  I will brook no argument on this point.

I am not writing a recipe for this because (1) I really want to be eating gelato while watching The Colbert Report; (2) it has, literally, 5 ingredients, none of which really require any measuring and (3) you should have all the makings of it in your house. (ALWAYS keep a good Italian grating cheese around. Learn from my errors.)

0 thoughts on “Cheap Ass Monday: The nostalgia, she is filling.”