Is there a more relaxing Monday night than sitting splayed on the couch with a camphor-and-menthol covered leg wrapped in plastic wrap and sitting on a heating pad, while you precariously balance a marginally functional 2001 laptop on a copy of Watchmen

* on your other leg? I submit that there is not, especially since I don’t watch Heros.** I’m doing it though, because (1) the leg thing actually feels really good once you get over the plastic wrap-weirdness and (2) the foodblogosphere must know about this quick, easy and cheap pasta and fish with spicy, garlicky, fennel-y tomato sauce.
*You have to have something between your leg and the laptop, because I think the 2001 models were actually coal-fired, and they get really fucking hot. By the way, Watchmen

is only $11 at Amazon right now. You need to hustle over there right now, and spend your $11 on the book instead of a movie ticket.

**I inadvertently typed “Eros” the first time, which is the version of “Heros” that comes on on Cinemax late at night.

Just so you know, the leg thing isn’t some weird calf-plastic wrap fetish I have. If I’m going to get kinky, I’ll wrap my forearms in parchment paper held on with rubber bands.* I’m doing it because my therapist, who I see for totally non-leg-related reasons, suggested that it might help out a spasm in my calf muscle that’s been plaguing me for weeks and has really put a dent in my normal calf-related activities, like walking or going down stairs without falling. (There’s no blood clot, we checked. I mean, a radiologist checked, I didn’t do it myself or anything, and even Brian isn’t that handy). Damned if this camphor-plastic wrap thing isn’t working, though, because each day is successively better and today was almost pain-free.

Anyway, that’s not why you came here, although some of you might have if you do, in fact, have a calf-plastic wrap fetish and made your way here via google. For you, I’m sorry: that’s the end. For the rest of you, there is this delicious pasta. I figure since April’s Recession Special: Hobo Mondays theme is “no pasta”, I’ve gotta stuff all the cheap pasta meals into March. 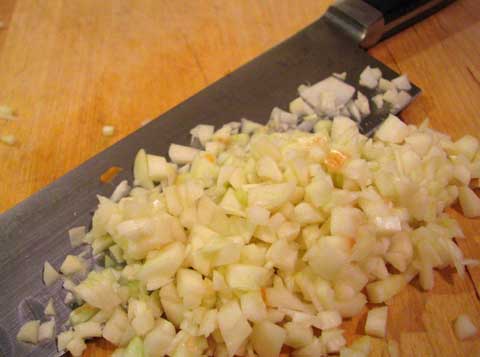 I knew I wanted something tomato-based, with good heat, a little sweetness, and maybe some of the flavor of a traditional cioppino, a traditional Italian, bouillabaisse-esque seafood stew that has now come to be associated with San Francisco after it came out of the closet during the Harvey Milk years. The traditional version doesn’t lend itself well to a $2.50 per person meal, what with the crab and the halibut that are often included, nor does it have pasta. So I guess what I really made is just a spicy pasta and fish dish, thank you very much Trader Joe’s and your $5 bags of mixed shrimp, scallops and calamari, but I thought a lot about cioppino while I was cooking. I don’t know if that counts for anything.*

The sauce started, as always with onions and olive oil with a little carrot thrown in for sweetness and then enough garlic to kill any vampires within a 75-mile radius. Maybe 80; the garlic-to-everything else ratio was REALLY high. Or low. I’m not good with numbers. Just know this: There was a lot of garlic. My name is Michelle, I am Italian, and I have a garlic problem. I added it once the onion and carrot had already started to sweeten, since I really wanted it to retain some of its vampire-repellant powers.

*I do know, I’m just being nice to myself: It doesn’t count.

I tossed in some red pepper flakes to start layering heat into the dish – I wanted to go for spicy but complex not just SPICY OH MY GOD WHERE IS THE MILK – and a little thyme, because I had it and like it in tomato sauce. I also added a dash of hot chili oil. I’d never used it and was a little scared. I was right to be scared, because if the finished dish had been any spicier (it came out just right and I am totally making it the next time I have a cold, although coating your left leg in camphor and menthol also does a lot to open up the sinuses) it would have been reaching problematic territory.

I poured in the little bit of white wine left over from last week’s most outstanding Smackdown which cooked down almost immediately, then added half a bottle of pure tomato pureé and a couple pinches of fennel seed. Which is a flavor that is often associated with cioppino. See! I was doing something correctly in spite of myself! I love it when that happens.

Note to readers: If you ever find yourself in this position – I mean the whole leg-plastic-heating pad-balanced-laptop position, not the faux-cioppino making position – pick a less slippery book than Watchmen. This post has become physically demanding.

I let the sauce simmer for just a few minutes, since I wanted this whole thing to be fast, and then chucked in part of a bag of Trader Joe’s frozen seafood mix. It’s a one-pound bargain bag of shrimp, bay scallops and calamari rings that I think costs around 5 bucks. We keep a couple of them in the freezer; they’re great to chuck into last minute soups and stews like this one here. Is it the world’s highest-quality seafood? No. Nor, however, is it the worst, and it’s damn handy.

If you’re not lucky enough to have a Trader Joe’s nearby I’m sorry, not just because you can’t get the bargain seafood bags but also because you can’t get those fucking addictive alphabet-shaped cinnamon cookies. Those things are like cookie crack. (I mean, crack in cookie form, not crack for cookies.) Pick up calamari and shrimp when they’re on sale, freeze ’em, and then get a friend who does live near a Trader Joe’s to send you some of those cookies.

The scallops, calamari and shrimp are all quick cooking, so even frozen solid they cook through in the time it takes to boil up some pasta. Assuming the water is already close to boiling, and you don’t have some kind of freakishly thick pasta that takes 25 minutes to cook. I mean, you’ve gotta plan a little here.*

*But not much, as you’ll soon see.

This would be better over linguini, yes. But the only linguini we had in the house was whole wheat, and Brian and I just looked at the box and simultaneous said: “No.” Also, fancy-pants Whole Foods whole wheat linguini? Pricey. Shop-Rite squiggly noodles whose name escapes me at the minute? Cheap.

I’d like to say I chose them because I thought the ridges would help carry the sauce. That would make me sound like a smart person who knows what she’s doing more than 5 minutes in advance of the events themselves, and that’s not the case. I mean, really, in my current state, I could have had six separate and unique nervous breakdowns, decided to bake a wedding cake for some imaginary friends and/or decide to quit my day job to pursue a dream of becoming an opera singer that I only just developed prior to making the decision. Possibly all of these things happened.*

The one thing I did remember to do: save some of the starchy pasta cooking water in case it was needed to help the final sauce pull together. I was inordinately proud of remembering to do this.

*Insanity update, for those following along: Meds shift again today, in their slow, tectonic movement toward some kind of finality. I will not be upset if you start a betting pool on when I’ll hit (1) the nadir and (2) the apex. In fact, I’ll buy a couple boxes. Since it’s so unpredictable anyway, it’s not like I have some kind of insider information.

Aside: Holy Jesus, the heat of the laptop is being transmitted all the way through the book and into my leg. Is that thermodynamically possible? If the computer gets that hot, how is it not currently engulfed in flames (or for that matter, the book, which unless I am mistaken is made of paper, a material well known for it’s ability to burn with ease)? How am I still typing?

This probably took you longer to read than it took me to make this. I apologize for the woodiness of the thyme stems used for garnish here, I know they don’t lend nearly the panache of chives. (Although, to be fair, few things do other than Cary Grant and a well-tailored Brooks Brothers suit with a just-saucy-enough pocket square.)

It was everything I wanted it to be. There was definitely heat – the spiciness hit you coming, going, and sideways, and there may have been a little drinking-milk-straight-from-the-carton while we did the dishes – but it was a good spicy. Even though the sauce was quick cooking, allowing the onion and carrot to sweeten, keeping some of the garlic’s pungency, adding the herbal note of thyme and the licoricey fennel made it much more complex than you’d expect of a 20-minute sauce. The spice and fennel paired well with the seafood (especially the calamari; I always wish they’d put more of them in the mixed bags), and pasta is just good. All in all, an easy, versatile dish that I made entirely out of things I already had in the house. The flavors are easily altered, and adding some fish stock could even turn this into a soup or stew. It’s almost embarrassingly Rachael Ray-ish, but since it tasted good, why should I care?

Unfortunately, I kept track of no cooking times and measured nothing, so I’m listing the approximate ingredients below and you’ll have to piece things together from the description. I have faith in you.

Spicy Cioppino-y Pasta with Mixed Seafood,
with worst-ever written recipe and no prices because these are all pantry staples for me so I didn’t actually go out and spend any money and they’re all cheap anyway.
Try and follow these awful instructions, or trust your instincts and go for it.
Serves 2

4 oz. pasta of your choice. Cook it. Water. Salt. You know how this works. Then take:

Saute for a few more minutes. Then add the:
3-4 ounces white wine

Let simmer for 5 minutes or so, then cook the following in the sauce:
8 oz. mixed seafood

Toss the sauce and seafood with the al dente pasta.