No one wanted to learn about this. Grass and milk, you said. We’d rather learn about a dish that looks like it has roux and/or cheese, because we love creamy delicious things, and we can’t imagine that sieve of grass and milk representing anything good.

Granted, it’s not like I’m withholding it from you entirely – although know that I could – and you’re learning about it a mere day later. Unfortunately, that’s one day extra that you’ve gone without lemongrass and black pepper infused coconut rice pudding, layered with passionfruit-coconut rice pudding. Delicious, delicious pudding, pudding that does not look like upchuck. Pudding that may have constituted my entire lunch yesterday and I’m glad, I tells ya, glad. 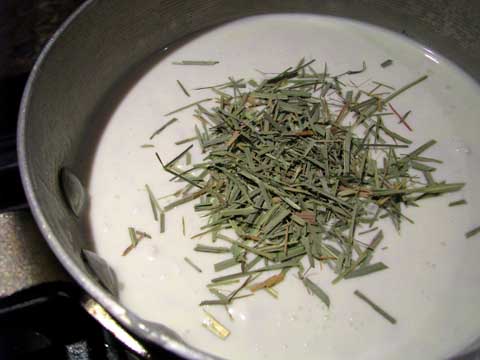 When you’re bipolar in the middle of a med change, or if you’re menopausal or just garden-variety crazy, you never know when you’re going to feel like shit vs. over the moon. Sometimes, you feel good at random times of day, which is why you sometimes end up making rice pudding at 2am on a Sunday morning (Or Monday morning, depending on your reckoning. I don’t think it counts as the next day until you’ve gone to bed and gotten up again.). Then again, this may be how normal people behave; I don’t really know, but I’m guessing no.

Anyway, rice pudding: I love it. I’ll eat any kind of rice pudding,* at any time of the day, in any flavor. My favorite kind, though, is made with arborio rice (the rice usually used for risotto), because of the way it retains its chew. Regular rice pudding is tasty, but I feel like the rice always ends up with a kind of grainy quality that breaks down in a funny way. I mean, I’ll eat it, because it’s pudding (I do love me some Kozy Shack). But arborio is better.

Before starting the rice pudding, I steeped the aforementioned lemongrass (dried, hence the, you know, grass-like appearance) in a mixture of milk, cream, coconut milk and sugar, tasting as I went until I liked the flavor.

*Except the kind with raisins. ANATHEMA.

You didn’t want to read about this, so you should just skip the rest because you obviously don’t care about things that are good.

I strained out the lemongrass and kept the milk mixture hot on a back burner while I grabbed the rice. I sauteed it for a few minutes in a light oil (canola? I never remember what kind of oil is in the cruet.) Sauteeing the rice creates a layer of fat around the grains that keeps them from absorbing the liquid too quickly. It has a fun Italian name, tostatura, I think. That’s a bonus you can pull out to impress your friends the next time you’re sitting around the salon discussing risotto. 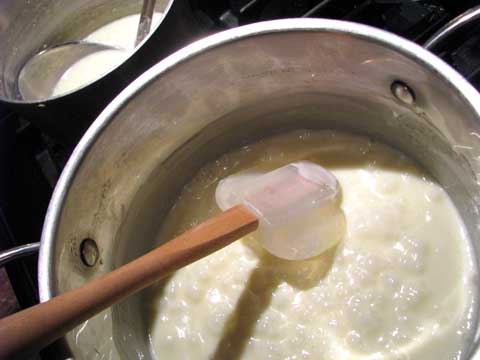 I like the stirring. I admit it. It’s kind of like a tranquilizer, but makes you less sleepy. Unless you’re doing it at 2 in the morning. Then you might get kind of sleepy toward the end.

Otherwise, I treated it like a normal risotto, but without the wine. I’m not giving you a basic risotto recipe, because you can find them on every street corner. I ladled the milk mixture in six ounces at a time, keeping the heat at medium-low and stirring stirring stirring. (I only know it was six ounces at a time because halfway through I noticed that the ladle was labeled.)

Run to the bathroom.

Gradually, the grains absorb the liquid and release starches, cooking and thickening the liquid at the same time. Part-way through the cooking, I added a healthy dose of cracked black pepper. I’m not sure if this was actually part of my strategy, or if this is just the kind of thing that happens when you make rice pudding at 2 in the morning. Or at this point, 2:30.

*You can get around this by making oven risotto; I think Gale Gand has a popular recipe for this. Those of you who don’t require the meditative qualities of constant stirring are free to use this method, although it’s not traditional and my nonna would never do it this way. I’m just saying.

Risotto requires cheese, does it not?

Once the rice was perfectly cooked and the liquid was pleasantly puddingy, I added the final component of any good risotto: cheese. In this case, mascarpone. Oh, I’m sorry television chefs of the world, I mean MARSCAPONE.

Then I thought, you know, any bipolar cook up at 2 in the morning could make lemongrass-black pepper infused coconut rice pudding. How can I make this really interesting? Passionfruit puree! Tart passionfruit. Smooth, sweet coconut. It’s a winning combination!

Unfortunately, the passionfruit puree was in the freezer, so I had to partially thaw it in a bowl of tepid water under a running tap before I could use it, but none of this matters to an overtired person making pudding in the middle of the night. I split the pudding, leaving about a third of it in the pot over the heat, and added the puree to that batch. 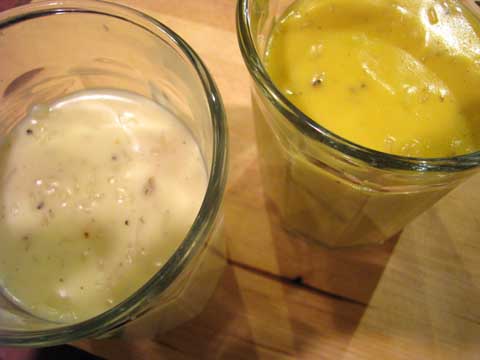 Do not drink this.

Of course, by that time the rice was cooked, so it wasn’t going to absorb all that much liquid and thicken up as much as I’d like. So I grabbed a couple of eggs, separated the yolks, gave them a quick whisk, tempered them with some of the hot rice pudding and whisked them into the pot. At the very least, I’d end up with some custardy pudding that I planned on layering with the straight coconut pudding to make a grown-up rice pudding parfait with subtle strata of cream and yellow layers.

It seemed like a good idea. Taking some of the coconut base and mixing some green curry also seemed like a good idea, as did making a whole new batch of the coconut pudding with green tea-infused milk* and jumping out of the window to see if I could keep myself afloat using only the power of my mind. I’m not talking about flying around or anything, I’m just talking basic levitation.

I packed away my puddings to chill, ate the bit of passionfruit pudding that wouldn’t fit in the container – cook’s treat, you know – and went to bed.

NOTE TO SELF: Next time, just take actual tranquilizers and go to bed. Also keep the windows locked.**

*I still think these are good ideas. For during the day.

**The kitchen is only the second floor, so at the very worst I would have broken a leg, plus I’m a spaz and probably wouldn’t have been able to figure out how to get the window screens off in my impaired state. OR? I could have TOTALLY SUCCEEDED. And now we’ll never know.

Do you have any idea how hard it was to get this picture without getting Brian’s arm in the shot or getting the rest of my kitchen in the shot, not to mention Brian’s shaky-hand problem? It was totally easy!

You know how Fabio ended up kicking ass on Top Chef after he broke his finger? Maybe I should also cook at 2 in the morning, because if I do say so myself, I come up with some freaking good ideas. This was good.

First off, it’s pretty, right? Lovely layers, a sprinkle of toasted coconut and a dusting of cracked black pepper – you dip a spoon in and get a little bit of everything.

Second, did I mention that it was really pretty? I mean, it really was. I justify my food as “rustic” to make up for the fact that it usually looks like it was plated and photographed by a legally blind woman using a 1983 Polaroid camera held backwards, but this actually looked like a sophisticated, elegant dish.

Third, it was really, really good. I mean, gooooood. The coconut pudding was creamy and satisfying, with an underlying note of lemongrass that asserted its lemony, grassy presence just enough. The passionfruit layer was a tart counterpoint (with its own citrusy notes that tied into the lemongrass) that cut though the richness of the coconut. And every once in a while, a crunch of black pepper would cut through the whole thing, cleansing the palate mid-bite.

It was delicious. It was inventive, I hope; although by saying that I’ve assured myself that within the first three comments someone will say “oh, there’s a recipe just like that in cookbook X.” Well SCREW cookbook X. This one is MINE, ALL MINE.

Also, it was quite pretty.

The moral of the story: I should always cook when (1) deeply, deeply overtired or (2) on drugs or (3) both. Also, pudding is delicious.

Basic coconut base: Combine the coconut milk, milk, cream, lemongrass, vanilla and half-cup of sugar in a saucepot. Bring to just below a simmer, stir to dissolve the sugar and let steep for 10-15 minutes. At the 10-minute mark, start sampling. When you get a flavor you like, strain out the lemongrass. Return the liquid to a pot and keep hot over low heat.

In another saucepot, heat the veg oil over medium heat. Add the rice and saute for a few minutes until the rice forms a translucent shell, about 5 minutes. Don’t let it brown; if it starts to color, turn the heat down.

Start adding the hot milk mixture a half-cup at a time. Stir stir stir as the rice cooks and the mixture thickens. Once the rice is fully cooked and the liquid mostly absorbed – you’ll have a thick, creamy, starchy liquid – take it off the heat and stir in 2 tablespoons of the mascarpone.

Remove two-thirds of the mixture, leaving the other third in the pot.

To the pudding remaining in the pot (still over medium-low heat), add the passionfruit puree and remaining sugar. Whisk the egg yolks in a small bowl and whisk in a half-cup of the hot pudding to temper it, then add the egg yolks to the pot. Cook over medium heat until the mixture thickens a bit, then whisk in the other 2 tablespoons of mascarpone.

You can eat the pudding warm, or let it chill. If you chill it overnight, you’ll need to thin each pudding and take the chill off by adding a tablespoon or two of milk or cream over low heat.

Layer the puddings in small cups, adding more of the plain coconut than the passionfruit (too much tart passionfruit will throw the flavor out of balance). Serve with some toasted coconut, some whipped cream, or just eat the puddings straight from the containers with a spoon.