Stop me if you think that you’ve heard this one before.* Pasta e lenticchie mediorientale. That is, pasta and lentils, a classic Neapolitan dish, with a Middle Eastern twist. As far as I can recall, unlike last week, I have not already written this post before. Go me! Short-term memory rules!

**Not YOU. You, I still love exactly the same.

The Westminster Dog Show is on in the background, and I’m hearing out of one ear that an Airedale Terrier has been disqualified because he had a “conflict of interest.” Moonlighting as a Dandie Dinmont Terrier? Tragic.

Pasta and lentils is an old-school dish from Naples, the original homeland of my family before we wised up and moved south, to the undiscovered beaches of Puglia*. (I mean, seriously, the Neapolitan mafia even controls garbage disposal there, and for part of 2008 the ENTIRE CITY was covered in bags of waste three stories high. It’s almost as awful as Cleveland, which still takes the prize for once having set a LAKE on FIRE because HOW THE FUCK DO YOU DO THAT.)

Anyway, pasta and lentils. Sometimes it’s more like a soup, sometimes more like a pasta dish, sometimes the lentils are kinda like a sauce, sometimes they’re clear flecks throughout the pasta. The only definite ingredients are pasta (gasp!), lentils (NO!), and tomatoes. The pasta can be broken up spaghetti, orechiette, or whatever the hell else you want.

If your worst nightmare is a lentil you’ve either led quite the charmed life or are schizophrenic.

Keeping with my Middle Eastern twist, I cooked some green lentils my new favorite way: with a clove-studded onion. No, I wasn’t clever enough to come up with that myself, I learned it from Susan Spicer’s Crescent City Cooking

(great book) while making this kick-ass lentil salad. It’s a magical idea that turns things delicious. I threw a bay leaf in too, for good measure.

*Some of them have now been discovered by British people looking for inexpensive holiday destinations. Dear British People: My town is pronounced BRIN-di-si, not Brin-DEE-si. It’s not hard. Warmly, Me.

I should note here, lest I sound too authoritative on the subject of pasta e lenticchie, I have never actually made this before. As a child, I loathed lentils – they actually were my worst nightmare – and would be forced to sit at the kitchen table until I developed ass bedsores from the chair as I sat staring at my congealed bowl of lentil soup, not allowed to leave until it was eaten. So it’s unclear that you can actually trust anything I’m saying, but let’s move on.

For the tomato component, I started with some diced bacon in a smidge* of olive oil, adding some onion and garlic once the bacon fat had rendered out.

You know the only thing that makes me distrust the America’s Test Kitchen people, although I otherwise revere their New Best Recipe

? The fact that in a recent issue of Cook’s Illustrated

bacon taste-testing, Niman Ranch bacon ranked in the “not recommended” section. HERESY! Because that is some fucking good bacon, and leaves you the best drippings of any bacon I’ve ever had, ever.

Do you know what it’s like to be dominated by a Scottish Terrier? The AKC says that they think they’re smarter than we are, so get ready to welcome your Scottie Overlords.

Into the bacon and onion I tossed two diced tomatoes (from a can, you’ll catch me moving to Cleveland before you catch me buying “fresh” tomatoes in the middle of winter in the Northeast). Then, to up the Middle Easternness, I added cumin, coriander and hot pepper, along with salt. I really like coriander in sweet dishes, but in savory dishes I love the way it kind of instantly “falafelizes” anything.

I also added a shot of red wine vinegar, to balance the earthy lentils with some acid.

Seriously, they’re coming for us.

By the way, I know I don’t have to tell you that when buying canned tomatoes you should always be buying San Marzano tomatoes. Because you already knew that. I’m just repeating it for my own good, really. S-A-N M-A-R-Z-A-N-O.

The Scottie just won the terrier group. THE DOMINATION BEGINS.

While the lentils finished cooking and the tomato mixture broke down a little, I cooked up some rotini and chiffonaded some spinach (Can you turn “chiffonade” into a verb? I’m not sure. But I just did, and then BLEW YOUR FUCKING MIND). I drained the finished lentils and dumped them on the spinach, then piled the tomatoes on top. After I added the pasta, I tossed everything together until the spinach was barely wilted.

You know I can never keep anything from you: Just like the blue cheese croissants, I wasn’t actually sure that this would taste good. In retrospect, I wonder how I could ever have thought a blue cheese croissant could be bad, and I now feel the same way about this pasta. 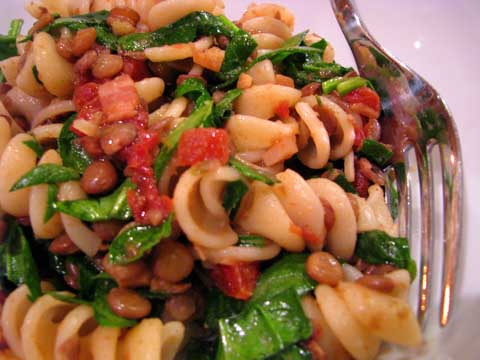 It was good. Surprisingly good. One, now that I’m a grown-up I love lentils, and find green lentils to be particularly tasty. Two, bacon. Three, the spices really came together beautifully; I’m only sad I used some already-ground spices I’d saved and didn’t grind the cumin and coriander fresh, which would have added a whole new depth of flavor. It could have used a touch more vinegar, but other than that was a really satisfying, simple and inexpensive dish.

And cheap. Really, really cheap. (In fact, there were enough leftovers for one of us to take for lunch tomorrow). I dub this “recessione speciale pasta e lenticchie.”

Pasta e Lenticchie Mediorientale, serves 2
I’m going to tell you up front: this is not a recipe, because I didn’t measure a freaking thing. It’s more like a set of guidelines, and you can vary the spice profile however you want. I won’t be offended.

Take one of the onions, peel it, and stick the cloves right into it. Add it to a medium saucepan with the bay leaf, lentils, and 3 cups of water. Cook until the lentils are tender but not falling apart. Drain any remaining liquid.

Dice the bacon. Heat a small pan over medium heat and add the bacon and olive oil. Cook for 4-5 minutes, until the bacon has rendered its fat. While the bacon is cooking, dice the second onion and all the garlic cloves; add them to the pan and saute until they soften (but don’t brown them heavily). Dice the canned tomatoes and add them to the bacon-onion mix along with the cumin, coriander, cayenne and some salt and pepper. Keep the pan over low heat to let the flavors meld and the tomatoes break down while you finish up. Add the vinegar toward the end of cooking.

Cook the pasta according to the package directions.

Put the spinach in the bottom of a large bowl. Put the hot lentils, tomato mix and pasta on top and toss until the spinach is just wilted. Taste for seasoning. Serve with an additional drizzle of olive oil on top.

ONE YEAR AGO: The Welshly Arms Is Renowned for Its Spiced Meats, Act 1