This month was all about romantic cliches. Yes, I made a grilled cheese sandwich, but I think I acquitted myself admirably with the post itself. Your entries below the jump – nice job, everyone! – plus some EXCITING NEWS about the future of TNS-related food events.

From non-bloggger but frequent commenter TSQ75 who, after I decided to call her “Mr. Roboto,” outed herself as a real human named Vera come these yummy looking waffles from The America’s Test Kitchen Family Cookbook. Check out her flickr photostream. How are waffles romantic? If you don’t already know, I’ll let Vera tell you: “This was a last minute choice after my husband informed me he would not be eating white chocolate mousse. I’m calling this “Sorry about last night Waffles.” Because hey, it happens.” True dat, yo. _____________________________________________________________
Jesse of I tell you what… is the first to go the obvious route: chocolate, with Mrs. Rombauer’s Brownies Cockaigne, despite her self-proclaimed lack of baking experience (experience or not, you can’t go wrong with the Joy of Cooking

Effort to Deliciousness returns with her own take on romantic cliches with a comforting aphrodisiac (does that even make sense?): oyster chowder from the New York Times Cookbook

. While I am a little sad that she shied away from Les Dames d’Escoffier

Now we’re cooking with gas, and by gas I mean romantic cliches: mocha-chocolate fondue from the creatively named Book of Fondues 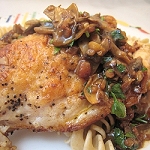 The prolific foodies at [eatingclub] vancouver* also hauled out the The America’s Test Kitchen Family Cookbook for some chicken marsala. The chicken in question was the ubiquitous breast giving them ample opportunity for mammary-related humor, an opportunity they grabbed and ran with with great gusto. They say they picked the recipe because it was a romantic date-at-home kinda meal, but I’m pretty sure it was just for the boob factor. *Would you mind terribly changing the name of your blog? Because I always have to type it seventeen times before I remember where the brackets go.
_____________________________________________________________

A late-breaker!  Thanks to the beauty of email, I never got (or accidentally deleted, but I’m sure it just got clogged in the internet’s labyrinth of tubes) Dark Side of the Fridge‘s boeuf bourguignon with nauseating adorable heart-shaped croutons.  Apparently, it’s one of David Rosengarten

Another late breaker! Now I blame my email forwarding for sure, not to mention names {cough] Bluehost [cough].*  My Little Marshmallow also went the chocolate route, allowing her sweetie to pick whatever he wanted from I Want Chocolate!

(Mine would have been all like, “Is there a chapter on beer? I want beer.”)  He picked Triple Chocolate Brownie Crunch, with sounds pretty damn chocolaty to me.

The unfortunately verdict, with which I will leave you: “It doesn’t look particularly appetizing, does it? Appearances can be deceiving, but this one wasn’t.”

SO: Here’s the scoop. I like the events, I think they’re interesting, I like to see what everyone comes up with. But I know that most of you are into your own food, not cookbooks. So we’re changing up the star event here: we’re retiring First Thursdays, and inaugurating Cheap Ass Mondays, ’cause we could all use a little creativity on a budget. More details to come in tomorrow’s Cheap Ass Monday post.

ONE YEAR AGO: Petoncles a l’anchois avec du pieds. Victoire!

0 thoughts on “February First Thursday: Romance my ass. No really, woo it.”