…who went to high school together in central New Jersey in the early nineties, a time of unfortunate amounts of flannel and hair that was just beginning to make its slow descent from The Great Bang Upheaval of 1986-91.

NB: I am aware that it is not yet Valentine’s Day, but (1) I couldn’t give a dead donkey’s shit about Valentine’s Day and (2) this is February’s First Thursday, and I had to justify the romance of a grilled cheese sandwich.

Russet potatoes, not my ordinary mashing potato but good for a really light and smoothe mash.

Junior year, she sat behind him in Trig with her feet up on the book rack under his desk, bouncing her legs as she is genetically predisposed to do so can you really blame her, annoying the shit out of him while he seethed but said nothing. Senior year, they had Calc together and he mocked her complete inability to manipulate numbers in any way, an inability that continues to this very day when Woman sometimes calls Man at work to help her with percentages. (Girl was never good at percentages.)

Boy and Girl were huge nerds, although in different ways. Boy was a physics geek who wore Nine Inch Nails t-shirts with the sleeves ripped off and read a lot of science fiction while listening to black metal.* Girl was an English nerd who knew the words to every Billy Joel song, even the shitty ones, had seen Les Miserables 5 times and had twenty-seven pairs of Keds in different colors including one pair she had painstakingly covered in sequins (we had to do something to fill the void left by our rapidly deflating hair).

Eventually, although they loathed each others’ tastes in music, they became friends and then kinda maybe sorta started to LIKE like each other.

*Or death metal. Or hardcore. Or grindcore. Girl could never tell them apart. Woman still can’t.

Senior year Boy, against all conventional wisdom regarding his particular kind of nerd-dom, auditioned for the school play; sometimes Girl would sit in the hallway and watch rehearsals. One day, Boy came out into the hallway and asked Girl to the homecoming dance. Girl distinctly remembers that she was wearing a Mickey Mouse sweatshirt she’d gotten on a trip to Disney World with her dad in 1987, gray sweatpants and a flannel shirt tied around her waist. Also Keds. Don’t ask why she remembers things like this.

Boy and Girl went to the dance and did not care that they looked like goons, Girl being around 5’11” and Boy hitting 5’5″ on a good day. They had a grand old time, and Boy sent many signals that he was interested in girl although he did not make a move because his momma raised him right.

We all know this is how mashed potatoes turn good, we just don’t like to admit it. White stuff = creme fraiche.

The next day, Boy and Girl were on the phone, talking about nothing. Boy still was not making a move, so Girl forced his hand:

Girl: Why haven’t you asked me out yet?

Girl: But I promise I will say yes.

Boy: So, can’t we just pretend that I already said it?

Kidding! She totally said yes. And that made them Steady Boyfriend and Girlfriend, because that was how things worked in high school.

*Girl had never been asked out before, so this was a critical, non-negotiable point. 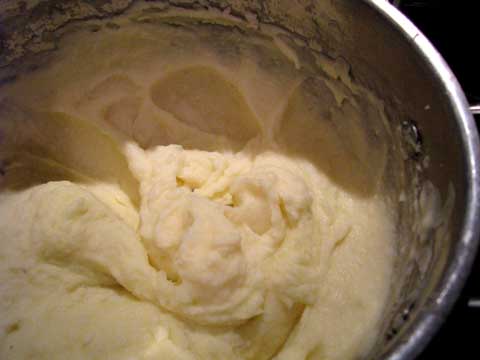 Noooo, there’s no butter in here. Just potatoes. Carbohydrates are good for you!

Boy and Girl graduated from high school and spent a blissful summer making out in the back of Boy’s dream car, a black 1989 Ford Taurus station wagon*, getting kicked out of various elementary school and municipal parking lots by the damn cops and their damn flashlights. They fell in love in a deeply nerdy way, the way only 17-year-olds can. When he was too broke to buy flowers on Valentine’s Day, he made a dozen origami roses. (She made him a giant chocolate chip cookie in the shape of a heart and stole some books she thought he would like from the library where she worked, because her momma had not raised her quite as right.) Sometimes he would bring her lunch at work, salami and cheese sandwiches cut into the shapes of hearts.

It’s a wonder they didn’t make one another nauseous with their own cuteness, the way they do in retrospect.

*I told you, Boy was a geek. That car looked like a Giant leech.

When Boy and Girl couldn’t go to their senior prom because it was too expensive ($120? This was suburban New Jersey not Scarsdale, for Christ’s sake.), Boy planned a romantic picnic, driving a blindfolded Girl to a lakeside where he’d laid out a picnic of their favorite 17-year-olds foods – Twizzlers, cheese popcorn, Dairy Queen blizzards made with chocolate ice cream and peanut butter cups – and had a boombox playing classical music.

It was the best prom ever.

At the end of the summer, Girl went off to college in Chicago while Boy stayed in Jersey. They kept in touch with an exciting new technology called, I believe, the “electronic post,” used primitive forms of online chat and spoke on the phone once a week, being mindful of the cost of long-distance calls (Did I mention the part where they were nerds? Yeah, they were also goody-two shoes.). They sent lots of letters, mostly mushy, some a little blue.*

*Girl is not sure if she’s happy or sad that she got rid of these letters, because they would either be HILARIOUS or painfully cringeworthy.**

**She disposed of them by leaving them in the shoebox on the steps of a high school several towns away from where she’d grown up, both as fodder for humor and a warning signal.

We drank this cider and holy shit: you need to try it. It’s like champagne with a subtle pear nose. SO GOOD. 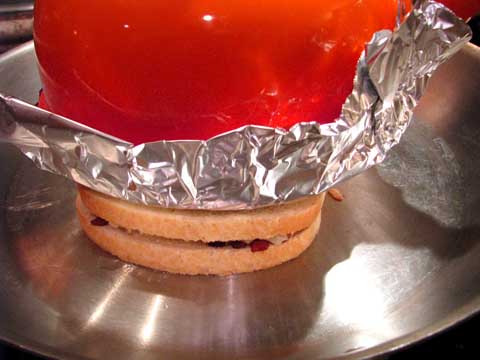 We used our new panini press for the sandwiches.

Boy and Girl didn’t speak for 5 years and moved off in different directions. Boy started dating a new girl, a girl who Girl heard, through the grapevine, looked just like Girl but shorter (not that Girl is suggesting anything). Girl had a painfully dysfunctional, emotionally unsatisfying pseudo-unrelationship with one of Boy’s best friends. Boy stayed in Jersey, finished college, got a job. Girl couldn’t make up her mind, went to grad school in Cambridge, went to law school in New York.

Girl would frequently drive down to Jersey from Boston or New York to see mutual friends – which often included Boy – get drunk and play Magic: The Gathering (see above re: GIANT FRICKING NERDS). At first, Boy and Girl go out of their way not to speak to one another. Then they start grudgingly acknowledging one another’s presences. Once night, after a particularly stimulating evening of Magic: The Gathering, they stay up all night talking. Then they spend a day in the city together. They go to a Celtic festival in Pennsylvania to watch oversized men throw heavy logs end-over-end (otherwise known as the “caber toss,” for those not up on the ancient Hibernian sports).*

Boy and Girl start to realize that in the years they’ve spent apart, they’ve somehow grown – although independently of one another – in the same direction. They have the same politics, the same values. There is something there other than the intense desire to make out in the back of a Ford Taurus station wagon. although that also remains.

As they’re hanging out one night, sitting side by side, Boy puts his hand on the small of Girl’s back. Girl leans back against the gentle pressure of Boy’s hand.

And suddenly, like in high school, Boy and Girl are a couple.

*Again, GIANT nerds. HUGE. To emphasize: neither Boy nor Girl are remotely Irish.

Two months later Boy and Girl, now technically Man and Woman, move in together. Man is terrified of Woman’s father, who was still somewhat bitter about the dumping of his daughter and turns up the intimidation level to 11*, but they manage to make it work. (Father grudgingkly comes around when Man moves Woman’s heavy furniture out of her fourth-floor walk-up, sparing Father from having to do it). Man and Woman have no plans to marry, just to live happily ever after.

One day a month or two later, Man and Woman are in Cambridge, visiting some of Woman’s friends who are still in school there. They’re wandering through some shops and stop to look at some plain silver bands. They decide that although they don’t want to marry, they’d like to make a firmer commitment to one another. They buy the inexpensive bands.

Man and Woman head to a now-defunct restaurant called Johnny’s Luncheonette on Massachusetts Avenue between Harvard and Central Square, which Woman is still angry has been closed. Over Johnny’s most excellent grilled cheese sandwiches and mashed potatoes – Man and Woman REALLY love sandwiches** – they exchange rings. Two little old blue-haired ladies are sitting in the next booth eating cereal, and Man and Woman pledge to become elderly people who order cereal in restaurants together.

Eventually, despite Woman’s philosophical and political objections to the institution of marriage, Man and Woman get married in a blatant exploitation of heterosexual privilege – Woman had had cancer, and needed better doctors than those available at her law school’s shitty healthcare center. But they don’t really count it, and both know that the real moment of commitment was over those damn sandwiches.

*And his natural 5 was like a normal person’s 10. God, I miss that crazy son of a bitch.

**Man slightly more so than Woman; he actually has a little song that he sings while assembling sandwiches. It’s really cute. You should hear it sometime.

0 thoughts on “TNS: Once there was a nerdy boy and a nerdy girl…”