BOILERPLATE: Have you heard? I’m a finalist in the 2009 Bloggies. Best-Kept Secret Blog! No shitting. I’ve added a new page to the site specifically to showcase my best work pander for votes. Four more days!

I know there are no exclamation points in the actual name of the dish, but I’m just so filled! With joy! And delicious flavor!

And from the unlikeliest of sources: Prince of Botox Rocco DiSpirito, the Cosimo di’Medici of frozen Bertoli pasta dinners. Did you know that before he became a corporate shill and reality television famewhore star, he was a really, really amazing chef? I mean, presumably he still is and just doesn’t want us to know it, unless the botulism has spread into the part of the body required for cheffing.  In which case, stick with the shilling! It’s really working for you!

Even though I know this, I still have lost most of the respect I once had for Rocco and probably wouldn’t have shelled out real cash for a Rocco cookbook had I not found it at a used bookstore for $3. But I did, so I now am the proud owner of DiSpirito’s Flavor 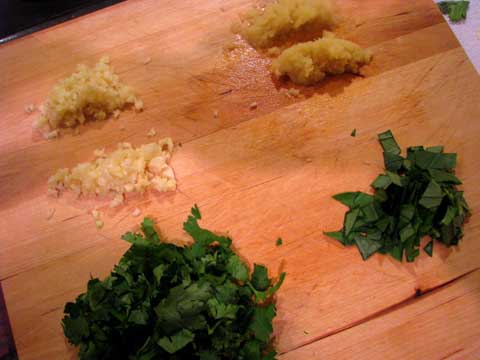 I wasn’t sure how insane I would be tonight – judging by this week’s change in meds, I should be starting to slide downhill tonight, hitting the nadir on Saturday when I will be SO FUN to be around – and it’s still frigid, so I wanted something quick and warming. I decided on Rocco’s beef Shabu Shabu.

In traditional Shabu Shabu, a Japanese dish, you swirl delicately cute little pieces of protein in boiling water or dashi and eat the cooked meat with a variety of flavorful dipping sauces; Shabu Shabu actually translates to something like “swish swish,” which, is that not the cutest thing? The Japanese always kick our asses at creating cute shit.

Rocco’s version is a soup, where a flavorful broth is poured over thin slices of beef tenderloin; the hot broth cooks the meat perfectly. It also calls for Thai basil, which I couldn’t find. Although I normally try to follow Thursday Night Smackdown recipes to the letter, I had to make some adjustments. So I bought regular basil (which I didn’t think would work) and cilantro (which I thought would work better with the flavor profile of the dish) and decided to make two pots of broth and pit them against one another.

Welcome to the Thunderbroth, motherfuckers!*

Up until the last 5 seconds, the broths are identical: garlic and ginger are quickly sauteed, and then hoisin, tamari, orange marmalade, lime juice and chicken stock go in. Yes, chicken stock in a box. The pots simmered away while I sliced the beef.

The marmalade nearly caused a minor incident. I didn’t really expect the bodega I ran into to have any orange marmalade, let alone a variety; I only went there because I knew they would have fresh mung bean sprouts, and everyone needs a good mung bean supplier. Turns out they not only had multiple brands, but multiple sub-categories: bitter and sweet. This was more marmalade than I was equipped to deal with; Rocco had failed to specify a sub-category and I was thrown into a fugue-like state of indecision. I stood in the tiny bodega aisle, forcing several people, including people with small children in small strollers, to re-direct their bodega routes while giving me the stink-eye.

Eventually I just grabbed the bitter and thank god, because who knows how long I could have been standing there. 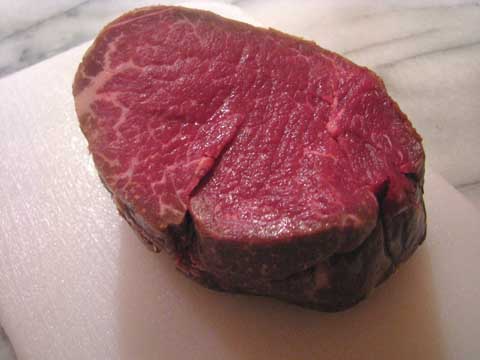 It was kinda hard not to just eat it.  Is that gross?  Yeah, I know, it’s a little gross.

In the recipe, it tells you to have your butcher slice some beef tenderloin paper-thin. I.e., a professional person with a VERY sharp knife or meat slicer made specifically for the purpose of thinly slicing meats should be responsible for this step.

Problem was, I already had a hunk of beef tenderloin in my freezer. I’d bought it for fancy Christmas brunch, but then ended up not using it because I didn’t like the shape of the cut (The butcher gave me the skinny end, which wouldn’t have given me 4 good thick steaks, and I was too much of a wuss to ask for the other end. Because contrary to what you might think, I am actually a shy, retiring wallflower in real life. Seriously. Why does no one believe me? I AM, GODDAMNIT.*).

*SERIOUSLY. This is also why I don’t answer the telephone.  Because who KNOWS who could be on the other end?  For the love of god, I’m thrown into shock by JAM.  Unfortunately, modern medicine has yet to develop an anti-psychotic or SSRI that helps with this problem.

I told you I should have just eaten the steak as is.

On one hand, it’s well-document that I have mad julienning skills. Unfortunately, it’s now also publicly documented that I have terrible slicing-half-frozen-filet mignon-paper-thin skills.

I know it looks kind of maybe okay, but that’s just because I arranged all the thinnest slices near one end of the plate and took a picture of that. I had a couple of really good slices, but mostly they looked like they’d been sliced by an old blind man with a hook for a hand.  Or for both hands.

Heading down the backstretch…

I layered the beef in two bowls. One got a few fresh basil leaves and the other some sprigs of cilantro; I had a picture that included both bowls but it had a shitty glare because I know less than nothing about food photography, so you only get to see the cilantro. If you need a moment to close your eyes and visualize the basil, go ahead now.

Okay, not too long. Eyes on me.

I tasted the simmering broths; Rocco is all about the balancing of sweet, sour, bitter and salty, and he’d given me leave to make any adjustments I felt necessary. I thought things could be a bit sweeter but not too sweet, so I added more orange marmalade.

A tale of two broths.

At the last moment, I brought the broths up to a rolling boil and added some more lime juice and the herbs, and the battle WAS ON.

ASIDE: I HATE my countertops. Other than the fact that you can put hot pots directly on them, they have no redeeming qualities.

You know what would have been really awesome? If I had actually paid 0.0001% of 1 percent of attention and not mixed up the broths: I poured the basil-infused broth over the meat with the cilantro, and the cilantro broth over the meat with the basil. Because I am smart like that. So along with poor paper-thin beef slicing skills, we’ve also now established that I have poor hypothesis-testing skills and am unable to properly employ the scientific method.

Luckily, the basil was pathetically weak and the cilantro was strong, so the basil had practically no effect in either one of the dishes. And Brian had an all-cilantro bowl, so we at least knew what that one tasted like.**

So Rocco has this thing where he likes forceful flavors that balance one another; he likes the flavors to initially start a rumble on your palate, and then suddenly coalesce into one harmonious delicious whole – kinda like what’s going on in a good Pad Thai. I’ve gotta hand it to the expressionless, taughtly-stretched motherfucker***: he achieved his goal completely. The broth was strong, fragrant with ginger, salty with tamari, bursting with fresh lime flavor, umami-ed with hoisin and gently perfumed with herbs. Poured over the filet, it quickly interacted with the cold beef and cooked it to a perfect medium/medium-rare. The strong broth and mild filet did exactly what the recipe predicted; at first you felt like you were eating too different dishes, when suddenly the pungency of the broth melded with the mild filet perfectly (you have to chew slowly).

The sad part? Knowing what a good, inventive chef he was makes the famewhoring even more pathetic.

*Key figure in developing the scientific method.  How pissed am I that I missed the online Jeopardy test this week?

There was a good-size chunk of tenderloin left over (the original piece was about a pound and a quarter), which I wrapped and put in the fridge for a decadent weekend brunch. But there were also a lot of errant bits left over. And what else can you do with them when you have this looking at you?:

Look at that punim, you would totally hook him up with leftover filet bits.*

*Yes, that low-hanging mirror is for the dogs.  They’re very vain.