BOILERPLATE: Have you heard? I’m a finalist in the 2009 Bloggies. Best-Kept Secret Blog! No shitting. I’ve added a new page to the site specifically to pander for votes.

On one hand, I slept like crap last night, I’m exhausted, and I know I’ll be able to spew information about pound cake at you more efficiently if the television is off, which will facilitate going to bed. On the other, I am a pathetic sucker for medieval history, and NBC is airing a terrible made-for-TV movie with Mira “Didn’t You Win an Oscar? We All Thought You Were Going to Be a Good Actress” Sorvino about the Templars (or, as they are more commonly know, the Poor Fellow-Soldiers of Christ and of the Temple of Solomon, or Pauperes commilitones Christi Templique Solomonici, in the Latin). 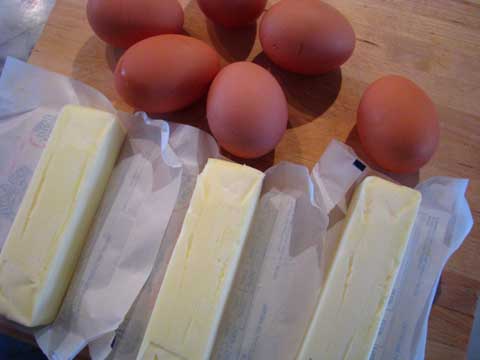 Templars, 1; Early Bedtime, 0. I have a problem; too much schooling, I think. Kids, go out and play some kickball and spend your teen years sneaking out of the house to get drunk down by the lake, or this is what will happen to you. The saddest part? I’m not actually watching the movie. I know all about the Knights Templar. But just knowing the movie is on makes me happy.

Sigh. My problem may be bigger than I had at first suspected.

Perhaps the Templars would not have come to such an ignominious end (i.e., being stripped of all their money and land and being burned at the stake) if they had had some orange and coriander pound cake with passion fruit curd with which to bribe the crowned heads and leading clergy of Europe. 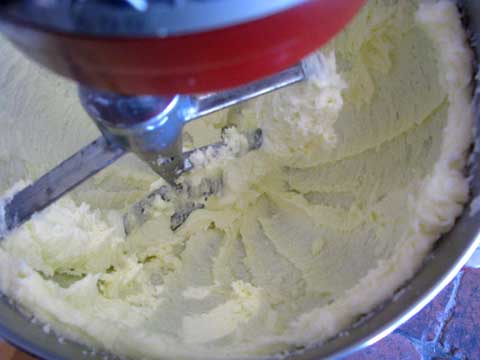 Any excuse to use the Professional 600 is a good excuse.

So I have this problem (aside from the Templar thing) – you know, the one where I’m crazy, and I pay exorbitant amounts of money to psychiatrists in an effort to re-wire the bits of brain that cause me to be crazy despite my brain’s seeming resistance to assistance? Some days I’m crazier than others, and sometimes trying to switch from one anti-crazy medication to another actually makes me crazier and I have to take tranquilizers to make it through the days until the medications balance out and my liver regenerates itself.

NOTE: Please do not leave any comments about St. John’s Wort, or B-vitamins, or Scientology or the all-banana diet that helped your cousin overcome her depression.* Some of us have actual brainial (I believe that’s the technical term) problems requiring medication, possibly for the rest of our lives. And I am fine with that, and it took real work for me to be fine with that. So if you are not fine with that and choose to say so, I will gladly invite you to suck my metaphorical left nut.

*If this is true, I am happy for your cousin. 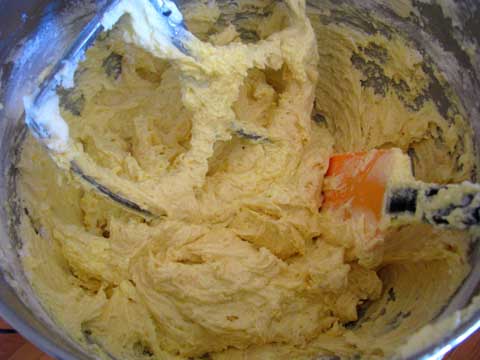 The Templars are crying out to us from the past. Can’t you hear them? “Pouuuund Caaaaaake.”

Ergo, Brian made some chicken caesar salad while I made pound cake. I’ve never made a pound cake that made me really happy before; the moisture level is not quite right, the crumb is off, it turns to poison, whatever. I never like ’em. Then again, I never tried the recipe from Dorie Greenspan’s Baking before, and she’s never led me awry. Well, okay, I’ve only tried one recipe so far, but it worked and that does, statistically speaking, give her a 100% track record.

I used her recipe as a starting place, increased it by 50% (the picture of the cake in the book looked a little low to a girl raised on Entemann’s) and decided to dress it up a little with orange (pure orange oil, because the Pathmark oranges all looked painfully anemic) and coriander (freshly ground). The coriander has some really citrusy and spicy undertones that I thought would play nicely with the orange. When I asked Brian what he thought of the combo, he – who normally does not like to offer opinions on food-related matters – informed me that orange and coriander are commonly paired in flavored beers.

Validated by beer! All systems go.

FYI, I just turned the movie off because it was so terrible it was making me sad for the Templars despite the fact that they’ve all been dead for roughly 700 years.

Do not judge a book by it’s cover.

After much creaming and mixing – I’m talking about a combined total of oh, a good 17 minutes of mixing and creaming; Dorie is really into the creaming – I glopped my thick batter into a loaf pan, spooned the small bit of surplus into a tiny bundt pan, and set it in the oven.

I don’t mean to knock Dorie and all her mixing here. There’s not much leavening in pound cake so it really relies on the eggs for maximum lifting power, which means beating to aerate and create structure. I’m just saying, if you need to mix for 17 minutes, you might want to get yourself a stool or something. 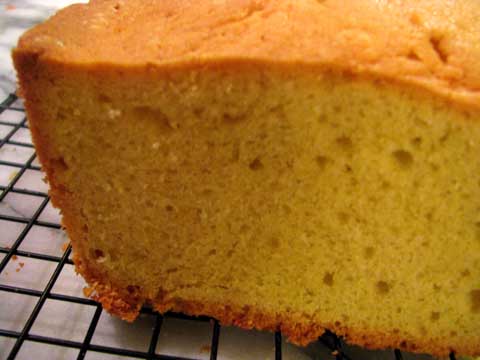 You bet your sweet bippy!*

Look at that crumb. I mean, really look at it. That is one sexy, sexy crumb. If I had a DSLR, you’d really be all up in that crumb’s grill and you’d be all like, “Shit! Look at that fucking crumb! What have I been doing with my life?”

It was a really good crumb.

The crust was a little too crunchy just out of the oven, but the innards were perfectly moist. The orange and coriander hit just the right notes. This is, after all, a pound cake, and you want to taste the delicious, delicious butter. Which you do, along with the subtle orange flavor from the oil enhanced ever-so-slightly by the coriander, which also added a faint spicy nuttiness.

Aside: I just turned the movie back on. There’s a hidden gospel! That could destroy Christianity as we know it! Too bad NBC is 6 years too late to really milk the Dan Brown cash cow for all it’s worth!

*What the hell does that mean? 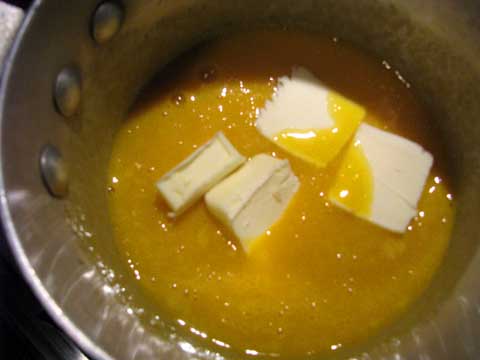 I will not waver in my mission to turn all liquids into curd.*

Aaaand the movie is off again.

There’s been a burst of curd around the foodblogosphere lately, mostly tangerine, as everyone tries to figure out what to do with the eleventymillion $3 crates of clementines they’ve bought. I love curd to begin with, and happened to have some passion fruit puree in the freezer from some geleés I’d made for a Christmas party. Yes, I made geleés, yes, they were really good and no, I didn’t tell you about it. Sometimes I need my private moments, internet, especially now that the whole Bloggie thing has caused me to become famous among dozens.

I love the tart-sweet tropical flavor of passion fruit and its wonderful sunny color, and I thought it would be a refreshing counterpoint to the buttery, buttery pound cake. I have an egg/sugar/fruit juice ratio that I usually rely on for curd but I didn’t have those amounts in the house and wasn’t about to run to the store, so I used the classic “throw what you have in a pot and hope for the best” method.

Another bonus of passion fruit: 100% tropical fruit purees come in convenient frozen pouches in the Latin aisle at the grocery store, so you can have wonderfully ripe, fragrant passion fruity foods at any time of the year.

*Within reason; I’m not going to go all Ice-9 and turn the seas into curd or anything. 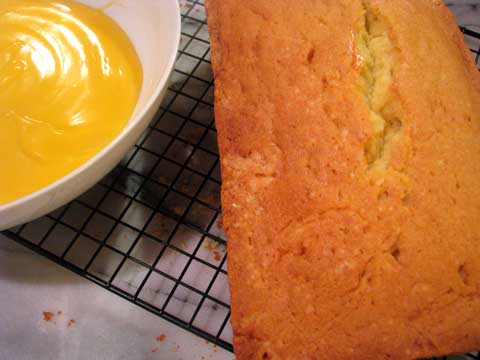 Luckily, it totally worked, and before you could say “Bob’s your uncle!”* I had a lovely bowl of marigold-colored, deeply flavored curd. I covered it with plastic wrap, pushing the wrap down onto the curd’s surface so it wouldn’t form a skin (the curd, not the wrap; the wrap is already a skin, is it not?) and left it in the fridge to chill…

For roughly 3 minutes. Yes, I know I should have given it a little longer to cool down and firm up, but that would have meant waiting longer to eat pound cake, and waiting to eat pound cake is not one of my strong suits. Especially since I’d already eaten the cake from the overflow mini-bundt pan and found it to be painfully good.

Movie back on. It’s hard to bang these things out in an hour. Sometimes you need a brain break, which Mira Sorvino’s “acting” amply provides.

*What the hell does THAT one mean?

Dorie Greenspan comes through for us way better than Alan ever did.

I whipped a little cream up by hand with a whisk, because sometimes I like to get a little happy-hands-at-home and also my forearms aren’t in the shape they used to be. I cut a generous slice of pound cake – you really shouldn’t cut a piece of pound cake less than 1 inch thick, it’s pointless – topped it with silky curd running down the side and added a dollop of whipped cream and the barest dusting of ground coriander.

I’ll give you two guesses as to how good this tasted, but I bet you only need one. (If you need the second one, you may also be in need of psychopharmacologic assistance. Even I’m not that crazy). You’ve already heard about the pound cake. You’ve heard about the curd. Presumably, you’ve encountered whipped cream at some point in your life. Like lobster stuffed with tacos, combining these three delicious things only makes them more delicious: richness offset by tart fruit, topped of with a wisp of cream and an additional hint of spice.

Okay, seriously, did someone invent some kind of talent-sucking-out machine and strap Mira Sorvino in? I mean, she did win an Oscar, right? Am I thinking of someone else? I could be, sometimes she starts to blend into Gwyneth Paltrow.

This is all making it seem like I think about Mira Sorvino more than I do. Really, I never have until tonight. 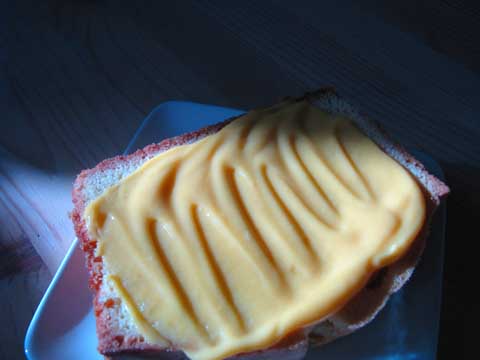 The pound cake can also be shrouded in mystery, if need be.

Dorie instructs that the pound cake gets better if allowed to sit, wrapped in plastic wrap, and I’m pleased to report that she is right and I will be eating this for breakfast tomorrow.

Recipes to be posted tomorrow, when I am not so tired that I walk into the doorjamb and then bounce off the wall while trying to get from the den to the back door to let the dogs out.

0 thoughts on “All Bets Are Off Monday: I'm having my cake and eating it too.”