Maybe $17 dollars, depending on whether the restaurant is here in Jersey City or New York, because the bacon is from Niman Ranch

. Those fuckers know how to handle a pig, I tell you what. Mimosas are extra.

And the Jews know how to make some egg bread.

Pigs are flying past my window, which means either monkeys have flown out of my butt or hell has frozen over. I’m going to go with the hell thing, because that’s the only explanation that also accounts for the current -2 temperature: it’s the chill emanating from Hades.

The only time temperature should involve single digits is when it’s being reckoned in Celsius.

Since there’s no way in hell we were going out for brunch today, there was no other option but to make an amazing brunch at home. Let me be clear: this is not an every-Saturday brunch. This is a special occasion, I-don’t-mind-fasting-for-the-rest-of-the-day brunch: honeyed mascarpone-stuffed challah French toast, with cardamom-banana-brown sugar topping. 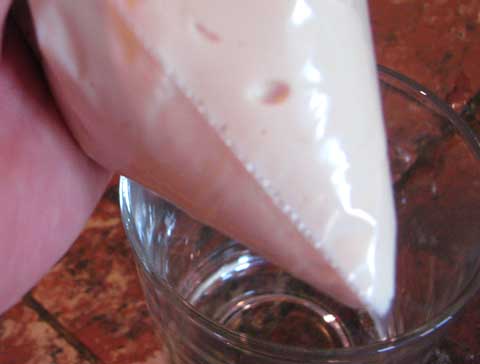 And the Italians? We know how to make everything else.

So that’s how I ended up, post-French toast binge, full and warm and happy, curled up under a cozy blanket with a cup of tea, watching Ratatouille*

while I try to use regular English words to try and explain how much I love this French toast and how much better it is than your French toast.

It starts with challah or brioche, cut thick enough that you can cut a pocket for stuffing into it – about an inch and a half thick. You could also use a nice white Pullman loaf, but I know you wouldn’t. If possible, do this the night before so the bread can sit and dry out a little overnight, which will help the bread soak up more delicious, delicious custard. You can make the custard the night before too, to save time in the morning. Brian, who is our official French-toast-cooker, swears by Alton Brown’s custard recipe and cooking method.

I mixed a few teaspoons of honey into the mascarpone left over from the second-to-last Smackdown. To get it into the bread, I used the time-honored method of piping with a ziploc bag.

*Have you not seen this movie? Do you think you’re too good for cartoons? YOU ARE NOT. Go to place where films are sold or rented, and buy or rent it.

Bread + cheese = a lifetime of sustenance.

I got just a few tablespoons of mascarpone into each slice – not an overwhelming amount and really all you need. Note that I said it’s all you need. I held myself back only because I didn’t want to scare you; otherwise I would have piped these babies full to bursting, because I enjoy taking things to unhealthy extremes. I propped them upright in a casserole dish and put them in the fridge to chill for a little while so the cheese wouldn’t ooze out immediately upon cooking. There was extra cheese left in the bag, but I used the promise of better things to come (and the smell of cooking bacon) to keep from squeezing it into my mouth. Mostly. Also I snacked on some of the bacon.

Sometimes waiting is the hardest part.

The bread soaks in the custard for 30 seconds to a minute per side, depending on thickness, and then rests on a cooling rack for a few minutes to allow the liquid to fully penetrate the bread. Meanwhile, you’re heating a pat of butter in a pan and eating an extra piece of bacon because after you ate the first piece there were an odd number of slices and you need an even number so that the two of you will ultimately have the same amounts of bacon on your plates.

It gets really hard right around here.

The toast browns for a few minutes on each side to crisp and then goes into a low oven – per Alton Brown – so the insides can finish cooking through while remaining moist and custardy. 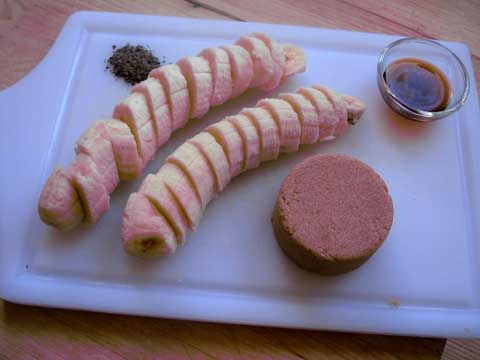 I could be a professional brown-sugar-packer.

Seriously, look at that brown sugar. You could play a full professional hockey match with that shit. (Is that what you call a full round of hockey – a match? I have no idea.)

The toast only spends 5 or 6 minutes in the oven, so I threw together an uber-quick pan sauce: some light brown sugar melted down with a pat of butter, a few tablespoons of cream, some good vanilla, a splash of dark rum and a half-teaspoon or so of cardamom. Cardamom is the new smoked paprika is the new miso cod is the new black. I was a little disappointed that either there wasn’t enough rum to light on fire, or I was too slow applying flame to rum. Either way, nothing was flambeed. Which is probably just as well, given that I’m an uncoordinated mess who once set her hair on fire in a halogen lamp. 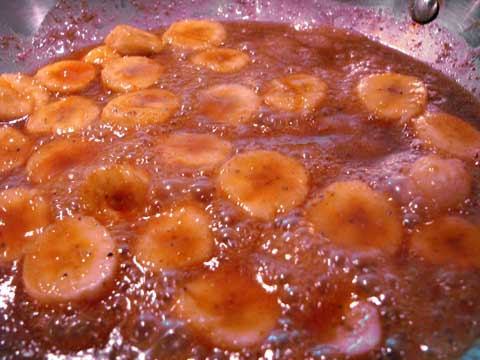 You could pour this on ANYTHING.

When the liquid got nice and bubbly, I added a few sliced bananas and let them warm through and cook a little while the liquid reduced down just a smidge, enough to coat the back of a spoon.

Did I mention there was bacon? Really, really good bacon.

did a bacon ranking not that long ago, and Niman Ranch came in pretty low on their list. Normally, I trust the Cook’s Illustrated people implicitly – the only thing they’ve ever lead me astray on has been oatmeal cookies, and I’m sure that that was my fault – but I have to quibble with this one. I think it fell in the rankings because it fell a little lower on the smokiness scale, but on the pure pork scale it can’t be beat. And the drippings, which you are of course saving in the crock where you save all your bacon fat because I know that you are doing that, are invaluable.

If you aren’t already doing this: don’t be a hater. Haven’t you read this book

yet? Okay, I haven’t either, but I’m also not the one who needs to be convinced of the wonders of pork fat. Less “bad” fat than butter, calorically the same as olive oil and TASTES LIKE BACON. What are you waiting for?

These are fat slices of French toast, so I took one*, spooned a few generous spoonfuls of banana and sauce over and attempted and failed to create some architectural interest by propping a few slices of bacon against it. The toast was beautifully browned, the bananas were heated through without turning into banana mush, and the sauce was just thick enough and perfectly glossy.

You know how sometimes you plate something up, and you almost don’t want to eat it because it looks so pretty? This plate was like that. I know it doesn’t look quite that good because I don’t actually know how to do anything in Photoshop other than manipulating brightness, contrast, and size. Not that I manipulate my photos in any way, because I don’t want to be disingenuous. But if I did use Photoshop and I were better at it, you would see just how gorgeous this plate was.

*For photographic purposes. I actually ate two. I’m admitting this to you because I know I can trust you, and because I know you will do the same thing.

Unrelated: Fancy Feast. Do you think your cat really cares if they’re getting Provençal fish and wild rice or a can of no-frills tuna? I’m just asking.

none of you has bought be yet despite everything I do for you. Don’t worry, I’m sure you’ll appreciate me after I’m dead. [cough cough]

Anyway, check out the innards of this French toast: Crisp, browned outer layer. Fully cooked but custardy strata. Creamy, slightly sweet cheese barely oozing out of the middle, mixing with the brown sugar- banana sauce. Flecks of cardamom offsetting the sweetness of the topping and adding an enticing undertone to the whole dish. Serious brunchy goodness, despite the lack of mimosas (I would have fallen asleep for the rest of the day, and I’ve already been writing the post for almost 5 hours because I pretty much stopped entirely while watching Ratatouille).

The night before you plan to make this, slice the bread into 1 1/2 inch slices and cut pockets for stuffing – stick a paring knife into the bottom of each slice and work it back and forth until you have as large a pocket as you can make without destroying the bread. Leave the bread out overnight to dry out. You can make the custard the night before as well: whisk half-and-half, eggs, salt and 2 tablespoons of the honey together.

Whisk the other 2 tablespoons of honey into the mascarpone. Scoop the mixture into a piping bag or ziploc with the tip snipped off. Fill the cavities in the bread with the cheese mixture. Put the bread into the fridge while you pre-heat the oven and get the custard ready to give the cheese a little time to chill.

When you’re ready to cook, preheat the oven to 300 and melt 1 tablespoon of the butter in a large skillet over medium heat.

Cook each piece of French toast for 2-3 minutes per side, until golden brown. Transfer all the toast to a baking sheet and bake for another 5-7 minutes, until cooked through.

It takes a little time, but trust me – it’s worth it.

Slice the bananas and toss them with the sauce. Cook for 5-6 minutes, until the bananas are heated through. The sauce will thicken a bit when off the heat. Pour over french toast, pancakes, waffles or ice cream and enjoy.