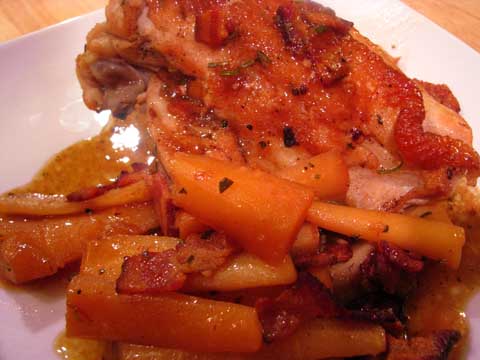 It’s fucking cold outside.  For those who don’t keep track of these things, or who live in parts of the world where there are no distinguishable seasons, “fucking cold” is approximately 19 degrees.  Above 20 is merely “cold,” while below 19 is “butt-ass cold.”  Negative degrees, which are predicted here in the next day or two, mean those of us in the Northern U.S. will literally be in the innermost circle of hell.  Don’t worry, the body heat you generate as you run to and fro dodging Satan’s 3 heads will help keep you alive.  Until Satan drops Judas and eats you.

When it’s fucking cold like this, there’s only one thing you can do:  BRAISE THE LIVING SHIT OUT OF SOMETHING.  Anything, really.  Have I mentioned it’s 19 degrees? 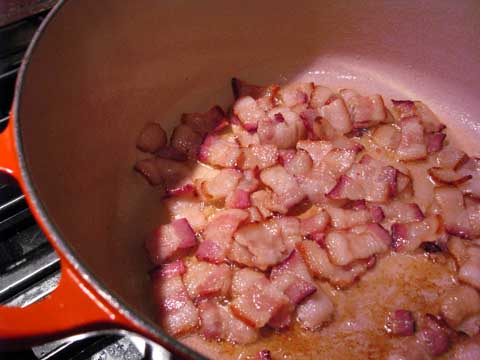 That’s how I knew it was a good day.

When you want to braise something – short ribs, lamb shanks, an old shoe, or in this case, chicken – you turn to the doyenne of braising: Molly Stevens, author of All About Braising

.  She can braise anything, and if it’s something you think shouldn’t be braised, she does not shy away from making it braise-able using butter, cream or bacon.

We didn’t want to do beef or lamb, since many of the cuts of those proteins that are braise-appropriate take a loooooong time to cook because of all the tough connective tissue that has to break down – my beef short ribs usually take about three and a half hours.  Luckily, chicken, fish and even vegetables are candidates for braising, so we settled on chicken breasts and parsnips braised in hard cider. Which, yum.

Unfortunately, Brian decided we needed another vegetable and decided to use her recipe for brussels sprouts braised on the stovetop with copious amounts of cream.  I have very strong opinions about brussels sprouts (read: I hate them), but I’ll save those for when we actually get to the tiny mutant cabbages sprouts themselves.  Let’s not unnecessarily distract ourselves from the bacon.

Note for the chef: after you’ve crisped and drained the bacon, put the dish containing it on top of the fridge so you don’t keep eating just a few pieces as you continue cooking, because who will notice just a few pieces being gone, and you’re only doing it once or twice or eight times?  Not that I learned this the hard way; I try not to learn too many life lessons and I’d already learned 2 today, so I just ate the bacon.  I just thought I would pass it on. 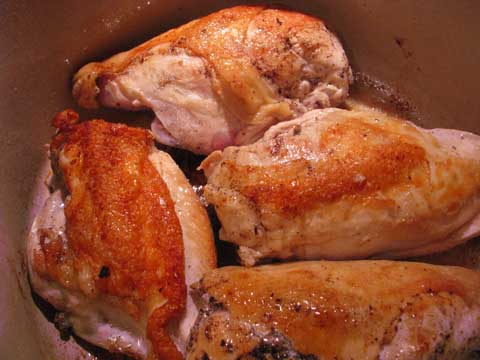 My only beef: You start the braise with the chicken skin-down, compromising the crispy goodness.

I drained most of the bacon fat – unfortunately, there was some olive oil mixed in so I couldn’t add it’s Niman Ranchy goodness to my precious crock of bacon fat – and seared some chicken breasts that were so massive that they barely fit in my biggest dutch oven.  The whole searing-in-bacon-fat thing helped.  It usually does.

But it’s all good, because then this happened: 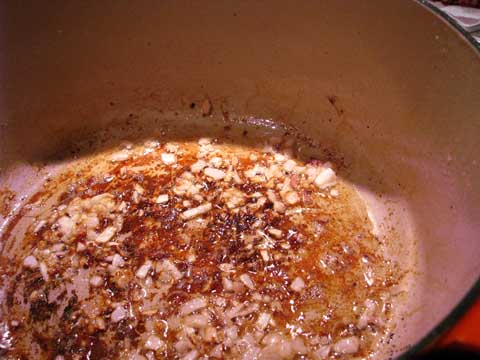 There are some shallots in there too, but that does not in any way undermine my point.

Look at that fond.  Really look at it.  Thick-cut bacon.  Chicken.  Have you ever seen a fond like that?  Admit it: that is some sexy fucking fond, and you are DYING to deglaze this pan.  You are going to have dreams about deglazing this fond.  This fond is hott. 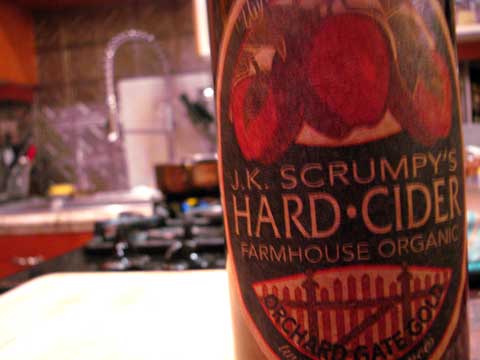 We all feel a little scrumpy sometimes.

Well too bad, suckers, because I got to deglaze that fond, with some delicious farmhouse cider from Michigan; it’s called “J.K. Scrumpy’s,” as the literate among you can clearly see, but I prefer to call it “Mr. Scrumpy,” or, if I’m in a really good mood, “Il buon dottore Scrumpy.”*  Mr. Scrumpy goes into the pot in 2 doses: one large that reduces by 75%, and one smaller dose that brings some fresh rosemary with it.  It’s unfortunate that we only had one bottle of the Scrump, because it’s good stuff.

pots release the crusty bits wonderfully easily – if you don’t have one, purchase one immediately.**  You will not regret it.  Well, you’ll regret it for a few minutes after you realize you just spent $200 on a pot, but once you get past that you’ll get over it.

**Broadway Pandhandler, aside from just being a great store, usually has a big Le Creuset sale in February – I think I got my 7.25 quart pot for just over 50% off normal prices. 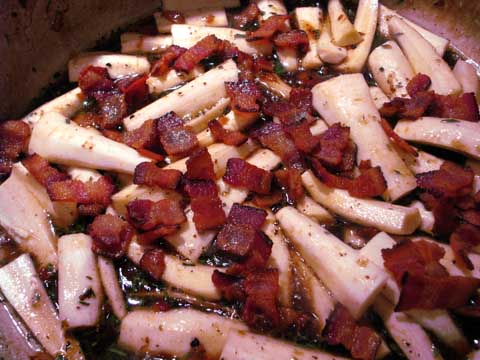 Who needs chicken?  I WILL SAY IT AGAIN: “Fuck the chicken.”

Peeled and chopped parsnips went into the reduced cider and the (remaining) bacon bits were sprinkled on top.

Can I give an aside here?  Iron Chef America is on in the background right now, and it’s “Battle Bacon.”  Someone cut a scallop into a long strip, wrapped the scallop around the bacon, and then wrapped the whole scallopy package in more bacon.  And then I had an orgasm and passed out.

I nestled the chicken into the parsnips and liquid, put some parchment down over the food – the lid of the dutch oven allows too much dead air between the food and the lid – and popped it into a low oven.  Well, it wasn’t really “popping,” you don’t really “pop” a cast-iron dutch oven anywhere so much as painfully haul it.

While the chicken cooked, it was time to face the sprouts. 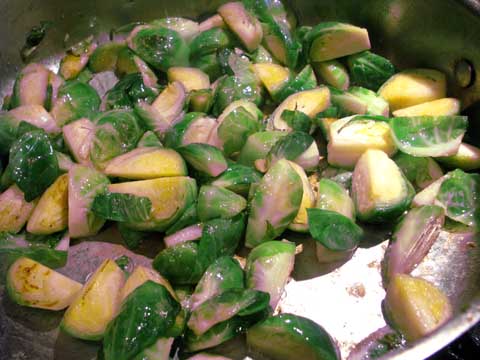 Here’s the thing about brussels sprouts: I don’t like them.  I don’t think they taste good.  They make you fart.  It annoys me that the “brussels” part of “brussels sprouts” has an “s” on the end of it.  As far as I’m concerned, their only redeeming quality is that the plant they grow on looks like a Christmas tree.

Unfortunately, Brian is not of the same mind.  In fact, he is of a distinctly different mind, so different that I am thankful that our relationship is otherwise so strong, because I find it truly troubling: he calls brussels sprouts “nature’s candy.”  And he means it.  This is clearly an inherited gene, as it is shared by other members of his family and that can’t be a coincidence.

I fully admit that I was bitter even having to cut up the brussels sprouts.  Molly told me I should chop them into 1/2-inch wedges, but I refused to be that exacting. To spite a vegetable.  Yes, I did that. 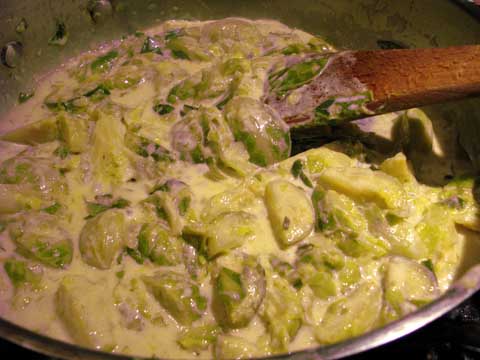 The sprouts went into a saute pan with nearly half a stick of butter, which at least leads them toward the trail head of redemption.  I tossed them around until they started to stink up the kitchen brown, then poured a cup of heavy cream over them and left them at a low simmer for half an hour or so.  Even though vegetables in cream sauce are almost always good, there’s always a part of me that rebels against taking such a healthy thing and turning it into a bowl full of myocardial infarction.

Infarction, heh.  Apologies to anyone who’s had one, but that’s just a funny word.

After half an hour, the sprouts were tender and the cream had reduced in volume by about half.  I added some lemon juice and kept tossing the sprouts over the heat until the cream was almost entirely gone and the sprouts were barely holding together.  Okay, fine: they smelled kind of good at this point.  That, or any vegetable doused in that much cream is inherently appealing.

The chicken came out at the same time, and it smelled incredible.  The parsnips were perfectly tender, and the enriched, bacony cider was heady and dreamy. 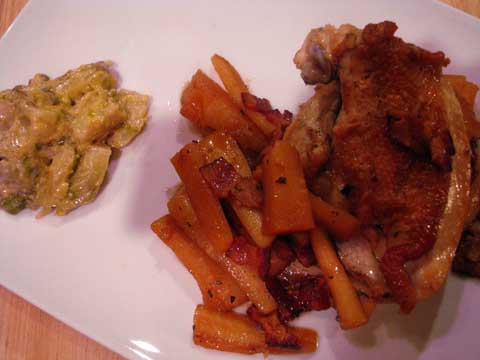 I didn’t way I would eat a LOT of brussels sprouts.

I was generous with the chicken and parsnips – you couldn’t really help it with the gigundous chicken breasts – and somewhat stingier with the brussels sprouts, although I tried to keep an open mind.

Ultimately, these dishes exemplified everything that’s wonderful about braising – a single pot, warming flavors, a hearty meal.  The apple-y but not to sweet cider, reduced, was redolent with the richness of the bacon and nuttiness of the parsnips.  It didn’t make a thick sauce, just slightly thicker than a broth but enough to nap the chicken and parsnips.  Moist heat keeps the chicken breasts wonderfully juicy, and braising helps infuse the meat with the flavors of all the other ingredients.  Parsnips, well, I just can’t say enough good things about them; I love a damn parsnip.  If I had any critique it would be that the dish overall was a tad on the sweet side, but that’s easily rectified with a shot of acid near the end.

I will (with qualifications) alter my impression of brussels sprouts:  when you cook them with a half-stick of butter and a cup of cream, they taste good.  However, there is still nothing that indicates I would enjoy a more plainly-prepared sprout, and it is highly doubtful that I will ever come to regard them as nature’s candy, a title which, as we all know, is jointly shared by bacon and chocolate.

0 thoughts on “TNS: You've won the battle, but not the war.”