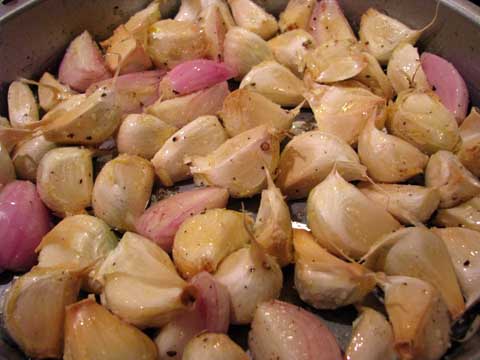 I was going to write this up last night, but then I went to a party that I’d only intended to stay at for an hour or two and ended up getting home at 3:30.  AND I had like a whole beer and a half, so you know I was in no shape to do anything.  When we walked in the front door, we were violently assaulted by the smell of garlic.  You’d think we’d have been used to the smell, which had been slowly seeping from our pores all evening and is probably embedded in our neighbors’ godawful sofa*, but nothing prepares you for walking into a house in which someone has cooked chicken with 50 cloves of garlic earlier in the day.

*They know their sofa is terrible, so maybe this will be incentive for them to finally ditch it.

I started the garlic roasting first.  I roughly used the recipe from The New Best Recipe

(which should be on your shelf next to the Charlie Palmer

) as guidance, and they have you roast the garlic and shallots first in a 400 degree oven.  I threw 50 cloves and 3 or 4 shallots in a pie plate, tossed them all with olive oil and salt, covered the pan with tinfoil and threw it into the oven.  It roasted for about 45 minutes, with a toss every 15 minutes or so and uncovered for the last 15.

During the garlic’s last few minutes, I started pan-searing the chicken on the stove.  The dish is traditionally made with a whole cut-up chicken (which the recipe recommends you brine), but since I was only cooking for the two of us and didn’t want to waste time brining (which is always a good idea, but benefits the breast meat more than anything else) because I had to get to the party in time to have enough time to consume my 1.5 beers (elapsed time: 5 hours), I just used a few bone-in, skin-on thighs. 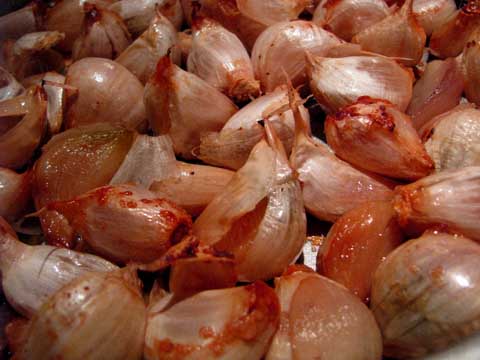 When they were done – perfectly, despite the fact that I usually roast garlic at a much lower temperature – I had to ask Brian to hide the baguette I’d bought to serve alongside the chicken because I would have gladly smeared the whole thing with soft, sweet, nutty garlic and said fuck the chicken.

I am officially opening a poll here: How many people will find this website tomorrow searching for the phrase “fuck the chicken”: 0, 1-5, 5-10, 10-20 or 25+?  Email me your selection.  The winner gets nothing except a vague sense of queasiness and some despondency about what the amazing potential of the internet has become.

Anyway, look at that shit and tell me you wouldn’t have wanted to do the same thing.  Hell, I would have eaten some without the bread.  Maybe I did.  You’ll never know, unless you come within a 15-foot radius of my person; then you would totally know.

Fig. 2: Does not advance plot.

Aside: There’s a show called “Big Daddy’s House”? On the Food Network?  When did that happen?  Next mid-season replacement: “Food Network: Cribs.”  I will be on the lookout for the Tyler Florence episode, to see whether his décor reflects his personal level of douchiness.* **

Chicken done and removed from the pan and the garlic out of the oven, I quickly gathered the rest of my ingredients since the rest of the dish goes pretty fast:  white wine (or vermouth), chicken stock, and fresh herbs – rosemary, thyme and bay.  I was supposed to tie these together into a little bunch – a bouquet garni – but that takes time and effort.  The wine and stock deglazed the pan and the herbs went in, as did the whole 50 cloves of garlic minus however many I ate.

*Sorry, I’ve had him on the brain since I noticed, with a not insignificant amount of pride, that someone found TNS yesterday searching for “Tyler Florence is a Douchebag.” 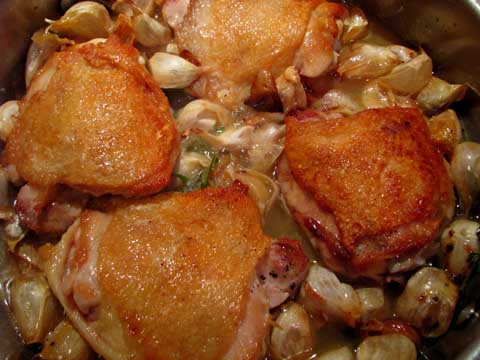 I nestled the chicken lovingly into the pan of winey, fragrant garlicky liquid, cranked the oven up a little and put the chicken into the oven to finish cooking.

While it cooked, I washed a couple bunches of rainbow chard I planned to wilt down with some lemon to serve as a side.  While I rinsed the chard, which is often home to more dirt than are in some of my potted plants, I reminisced fondly on those halcyon summer days when I was overwhelmed, deluged, buried under an endless mountain of fresh chard from the CSA and neighbors’ gardens.  I then reflected sadly at having to buy 2 bunches, each containing precisely 4 leaves, at Whole Foods for $3 a bunch.  However, I did appreciate the chard-packer Whole Foods employs to make sure that every bunch has one stalk of every color.

Anyway, washing, drying, cutting out some of the thicker stems (I wanted a quick wilt, and the stalks can take a while to cook, tasty though they are), chopping.  I didn’t take any pictures, because they would have been boring and I’ve already wasted your time with a largely useless photo of herbs sitting on a cookbook.

When the chicken hit temperature I pulled the pan from the oven, piled the chicken and garlic into a serving dish and used some tongs to pick out the herbs’ woody stems.  Have I ever mentioned how much I love tongs?  I don’t love them quite as much as I love whisks – I think I currently own 7, and that is NOT ENOUGH, you never know when you will need to whisk – but multiple pairs of tongs (preferably these 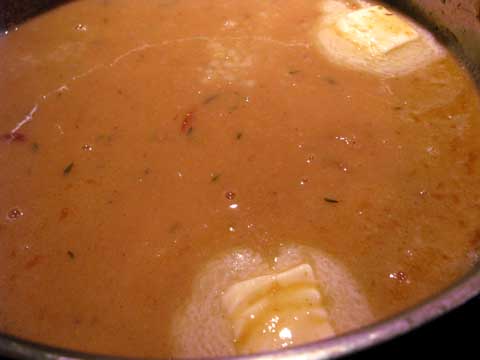 A sauce not finished with good butter is like a day without nutella: not really a day at all.

Here’s where the true love in this dish comes in:  You don’t just cook the chicken in the garlic-laden broth.  No, you also take some of the delicious soft garlic – in my case, 16-20 cloves, and press them through a strainer.  The resulting paste is whisked into the remaining wine and stock along with some butter, thickening the sauce and enriching it with all the sweet love of the roasted garlic.  I let the liquid reduce by about a third, then finished it off the heat with another few pats of butter to thicken it up a bit more and give it that beautiful gloss that only comes from butter.  Wonderful, wonderful butter.

I poured the sauce off and wilted the chard down in the same pan with a pinch of salt and a few squeezes of lemon juice.  Brian is often dismayed by the state in which I leave the kitchen post-cooking – his motto is “clean as you go,” which I know is technically the right way to do things, whereas mine has always been, “you haven’t really cooked anything if you don’t end up with bits of food seared onto the stove and smeared on the ass of your pants.”  So I was pretty proud of my one-pan method.*

You might clean as you go, but I know you all wipe your hands on the asses of your pants.

*It may have been efficient, but it did not make things any cleaner. 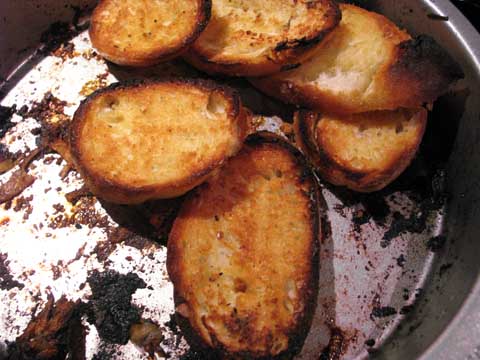 There’s no reason to panic.  You can always get more toast.

While the chard cooked down, I threw a few slices of baguette under the broiler to crisp up for garlic bruschetta – using the same pan the garlic had roasted in earlier, see how hard I tried?

Everyone burns the toast once in a while. 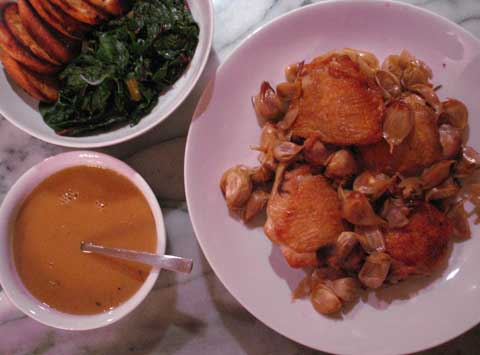 I would have invited you for dinner if I’d known you were free, really.

The chard done and the bread duly incinerated, dinner was served: a platter of crispy on the outside, moist on the inside chicken, perfumed just enough with the wine, herbs and garlic, scattered with cloves of sweet buttery garlic.  A gravy, just thick enough, sweet and nutty and redolent of roasted garlic, but with enough underlying punch to remind you of exactly what you’re eating.  A bowl of lemony chard, perfect for helping cut the hearty richness of the chicken and sauce, and the bread briquettes – rubbed with raw garlic.  You know, just in case.

This dinner was damn near perfect.  Everything went beautifully together.  The garlicky sauce seeped into the chard.  The remaining garlic cloves were squeezed onto the bruschetta or eaten along with juicy bites of chicken.  It was warm, hearty and everything you’d want on a stormy, wintry day on which we were supposed to get 7 inches of snow and only got 1, not that I am bitter.

You’ll excuse me now, as I have to take several showers and steam-clean all the upholstery in my apartment.  But it’s totally worth it, I swear.

Chicken with 50 Cloves of Garlic
Serves 2-4, depending on your hunger level

Put the unpeeled garlic cloves and shallots in a pie pan or baking dish; drizzle with 2 tablespoons of the olive oil, sprinkle with salt and toss to coat everything evenly.  Cover the dish with foil and roast the garlic for 45 minutes, tossing them every 15 minutes (you don’t have to remove the foil, just shake the pan around) and uncovering the pan for the last 15.  Remove the pan from the oven and set aside.

When the garlic is almost done, pat the chicken dry and sprinkle it with salt and pepper.  Heat the remaining 1/2 tablespoon of olive oil in a large, ovenproof skillet until it’s smoking and put the chicken in skin-side down.  Sear it for 5-6 minutes until you get a nice brown crust, and flip it and cook for another 4-5 minutes.  Remove it from the pan.

Pour the wine and stock into the hot pan and scrape up all the good chickeny bits stuck to the bottom.  Add the herbs, all the garlic and shallot, and sit the chicken down into the mix.  Throw the pan into the oven until the chicken is done, at about 170 degrees.

Take the pan out of the oven and remove the chicken to a serving dish.  Pick out herbs.  Using a slotted spoon, pull out 16-18 cloves and put them in a mesh strainer; scatter the rest around the chicken.  Leave all the liquid in the pan, and stash the chicken in a warming draw or low oven to keep warm.

Push the garlic through the strainer to get a smooth paste.  Whisk the garlic paste into the wine and stock along with 2 tablespoons of the butter.  Cook the liquid down by about a third, until it coats the back of a spoon.  Off the heat, whisk in the other 2 tablespoons of butter to thicken and gloss-ify the sauce.  Serve immediately, with some good bread for sopping up the sauce and smearing with the remaining garlic cloves.

0 thoughts on “I see your quarante cloves, and I raise you dix.”