I think I might have a girlcrush on Charlie Palmer, because his Practical Guide to the New American Kitchen

can do no wrong. Every recipe I’ve tried has been delicious and the book is washable, so there’s that. Plus? Scallops wrapped in bacon, creamy paprika-spiked mascarpone* polenta and the most delicious roasted, wine-soaked red peppers the world has ever seen.

Or as my version of the recipe is called “giant motherfucking scallops wrapped in bacon.”

I know that today is technically First Thursday, and the theme is “Challenge Yourself.” I am also fully aware that there is nothing inherently challenging about a bacon-wrapped scallop. Allow me to explain the two ways in which this meal was challenging:

Anyway, my moods have been cycling like Greg LeMond on the Alpe d’Huez** while my anxiety creeps slowly toward heart-exploding levels. I contemplated cooking something actually challenging, but the thought caused by blood pressure to rise to levels heretofore undocumented in living human beings. So the original plan – standing rib roast – was out. In? Scallops. Bacon. Polenta.

*Seriously, I knew it would be scratchy; why did I buy it? It’s not even that cute. Damn IKEA marketplace and all your inexpensive Scandinavian tchotchkes and tealights and flatware. And scratchy pillows.

**Readers who have been with me since this summer will know about my unnatural fascination with the Tour de France.

Brian stopped by Whole Foods on the way home and asked the usually-useless fishmonger to pick out six large scallops of roughly the same size and weight, which she did with the skill of a usually-useless fishmonger. Once you wrap ’em in bacon and skewer them, though, appearances become much less important. They went into the fridge to wait while we dealt with the peppers and polenta.

If I’m being honest, I’ve always thought that Jonathan Franzen’s The Corrections

was totally overrated. Also I was unsure of the combo of flavors in this dish: the roasted peppers and fresh basil seemed odd with the bacony scallops, while the paprika seemed like it would overwhelm the polenta. But this is the Smackdown, so I follow directions. 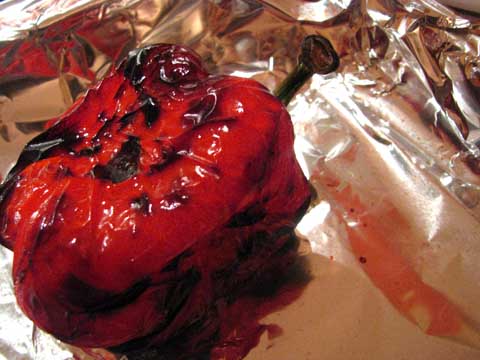 Deep breaths, deep breaths. Not because I’m stressed, but because this is one of the best smells ever.

Charlie has you rub the outside of the pepper with vegetable oil before roasting, even though the skin will eventually peel off. I usually just roast peppers directly over the gas range, but Brian has been safety-conscious since he was three apples high, so he threw them under the broiler so as not to start a grease fire. Because a grease fire? Would totally help my stress level. (I still would have done them on the stove). Once roasted, we left them in a covered bowl to steam for a few minutes to make peeling easier, then Brian peeled, de-seeded, sliced them, sauteed them with some garlic I’d thinly sliced and put them in the warming drawer to await their final treatment.

I sliced that garlic really fricking thin and I will take this opportunity, once again, to say that I do not own a mandolin and I fucking rule. 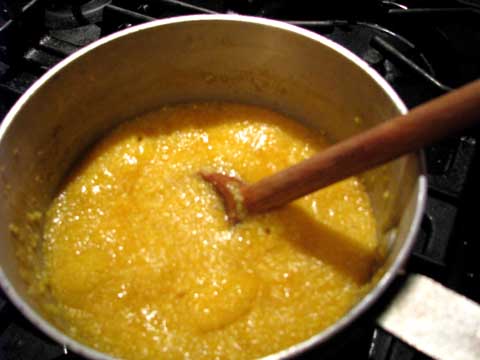 Shitty picture of polenta cooking, collection of the artist.

While Brian dealt with the peppers, I started the polenta in chicken stock spiked with smoked paprika. Which, as we all know, turns everything it touches to gold. I took roughly eleventythousand pictures trying to get a shot with one of the big bubbles bursting on its surface. You can see the level of my success above. 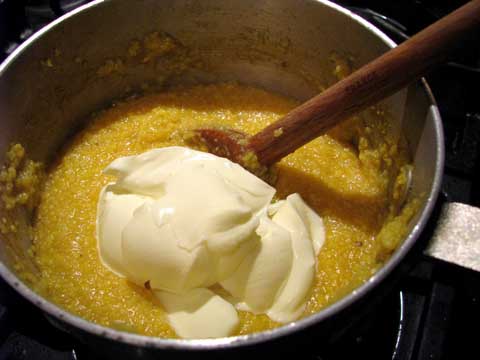 Mascarpone. In the polenta. Enough said.

Scallops wrapped in bacon are my secret boyfriend.

It’s not a secret anymore, bitches! We heated up a thin film of veg oil in a smoking-hot cast iron skillet and put the scallops in, three minutes per side. I was a little doubtful that the bacon would cook all the way through in three minutes per side, but apparently bacon takes on magical quick-cooking properties when wrapped around shellfish.

You’ve probably noticed that I lump all ocean-dwelling creatures in the “fish” category, although they’re technically often shellfish. If you have a problem with that, take it up with someone else because I’m not going back to re-tag a year’s worth of posts.

The scallops seared beautifully, taking on a gorgeous brown sheen and leaving just enough crusty bits in the pan to make deglazing worthwhile. I fucking hate a pointless deglaze.

Seriously, HOW CAN PEPPERS BE SO GOOD?

The scallops came out and were tented, and Brian poured some white wine into the pan; the cast iron easily released all the scallopy and bacony wonderfulness left in the pan. The peppers and garlic went in, and the whole fragrant mess cooked until the wine was gone except for a slick glaze on the vegetables. Roughly torn basil went in at the last minute, barely wilting and releasing its wonderful aroma. I know, I know, this dish is totally out of season. Don’t worry, I spent a few seconds feeling guilty about it.

This is a thing you want to eat.

Okay, this isn’t my plate, this is the picture from the Charlie Palmer book. But check mine out, and then think about what a bad ass I am and how much better I am than you:

So maybe its not exactly the same; I don’t know how Charlie gets his polenta to be so creamy white when it’s full of paprika. Magic, probably. But everything else, come on – recognize greatness when you see it.

The thing I love about the dishes in this book is how they’re always so much greater than the sum of their parts. Don’t get me wrong, the parts were all good. But a bite with a bit of scallop, a bit of bacon, a bit of polenta, a bit of pepper – amazing. His ability to balance flavors, thus elevating them all, is unparalleled. At least among the 50-odd cookbooks I happen to own, but I’m sure we can safely extrapolate to the thousands of other cookbooks available for purchase and say he is the best. The sweet scallop and smoky bacon were lovely with the creamy yet slightly smokey polenta. The peppers brought yet another layer of sweet smokiness, but the acid in the wine and freshness of the barely-cooked basil brought just enough freshness to the dish to keep it from being too heavy to eat. The interplay of textures brought another dimension: creamy, crispy, chewy. In fact, I think I may have discovered a 6th flavor that exists beyond umami, which I will call “fucking deliciousness.”

The bottom line: If you are okay with taking advice from a crazy person, buy this book.

0 thoughts on “Thursday Night Smackdown: Sometimes Standing Up is a Challenge in Itself”