It’s so nice to officially be on vacation, to be able to stay up late, sitting by the twinkly Christmas tree, taking the time to reflect on a day spent puttering in the kitchen with Christmas baking – I cozied up with the KitchenAid, sifted and whipped and piped, sang along to the best version of “Jingle Bells” (Sinatra), and failed utterly to produce a single correctly-formed macaron. God, I love the holidays.

Also, on Christmas – which, if you don’t know, is tomorrow – I turn 31 AND I discovered several new gray hairs along my part today. Why are they always along the part, and why do they corkscrew away from the rest of my hair like that? But I will try to confine this post to a single depressing topic.*

*Random factoid #371: I actually kinda like the gray hairs, and secretly look forward to being an old lady with crazy long thick curly white hair. Also I will take up metalworking, like the grandma in “Twister”.

Heeding the useful advice of others is not my strong suit.

If you don’t already know what a macaron is, then you’ve been ignoring every food blog there is for the past 2 years and shame on you. For a description and the history of a french macaron, which is not in any way like a macaroon, I point you to Serious Eats’ comprehensive series on the eating and making of said cookie and its very helpful cross-sectioned diagram. If you’ve never encountered one, you really should go see what the ideal macaron is so you can see how very not like that mine came out.

For my initial venture into the intimidating world of macaronage I started with chocolate, reportedly one of the more difficult macarons to get right, because I like to set myself up for failure and then get excited when I exceed my barest expectations. I used David Lebovitz’s recipe as a starting point, replacing some of the cocoa powder with cinnamon – paired with a cinnamon and chile-infused ganache filling, they would be macarons mexicain épicé. Fancy!

I’ve been a little fawny over David Lebovitz lately, huh? I declare that for the next two weeks I will completely disavow David and his entire body of work, including but not limited to his tweets even though they are funny.*

Anyway, I ground my almond meal, confectioners sugar, cocoa and cinnamon together, dutifully sifted it, and folded it into a meringue that I suspected wasn’t quite stiff enough.

**I don’t actually know him. But I would love to, so that I’d have someone fun to crash with in the fantasy world where I jet off to Paris on weekends for pastry and cheese binges. So seriously, call me! 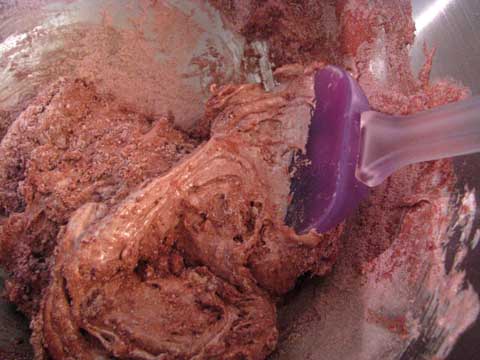 “We’re in a volcano. We’re surrounded by liquid hot magma.”

The folding is the critical part of making the batter, and it’s this step that’s actually called macaronage. There are no hard and fast guidelines that I can find or figure out, just that you shouldn’t fold too little or too much. Helpful! And the folding isn’t quite like you’re making a mousse or souffle – you want a fairly dense batter (I think – clearly I am not to be trusted in this arena) so the issue doesn’t seem to be maximizing the amount of air kept in – but it’s still clearly described as folding and not mere stirring.

Also, properly formed batter should “flow like magma.” I don’t know where that line started, but EVERY RECIPE SAYS IT and I have NO IDEA WHAT IT MEANS, having never personally been in the presence of magma. And what kind of magma are we talking about? I mean, I assume truly molten magma would be pretty liquid, but magma that’s started to flow along the earth’s surface would become gradually more viscous, eventually becoming volcanic (or igneous) rock, would it not? What kind of guideline is this?

Personally, I suspect it may be a line planted by Laudree, famed Parisian macaron purveyor, to discourage the home macaroniere and drive up their business. Yes, France, I know that’s probably not a word. I DON’T CARE. I’m planting it here to get picked up like the magma bullshit.

Anyway, my batter ended up being really, really stiff, such that anything resembling proper folding became impossible. Kind of like magma that’s really hustling along to the igneous rock stage. Or a prehistoric tar pit. I felt a little like a pilgrim-era alewife laboring over a vat of lye to make soap, except with slightly fewer toxic fumes and puritanical tendencies.*

*I don’t believe in hell, but I have REALLY STRICT RULES about how our hundreds of books should be organized and arranged and WOE BETIDE THE VISITOR who casually picks books up and then puts them down all willy-nilly.

I can’t make a poop joke because it’s just not challenging enough. But you should feel free.

The next step: pipe the batter into rounds. I no longer have a proper piping bag because the only one I had split into two during the disturbing Morimoto extruded fish-paste incident, so I used the classic snip-the-corner-off-a-ziploc-bag method. Because of my non-magma batter, I had to physically draw little circles with the piping bag; it just wasn’t fluid enough to pipe into little blobs. They didn’t spread at all, not even a little bit, so I just pressed any little peaks down with my finger and hoped for the best.

Lots of recipes call for letting the piped cookies sit out for anywhere from 20 minutes to 2 hours to develop a skin before baking, while some skip this step entirely. Mine sat for 20 minutes, mainly because I’d forgotten to turn the oven on before I started this whole thing and I had to wait for it to hit 375. 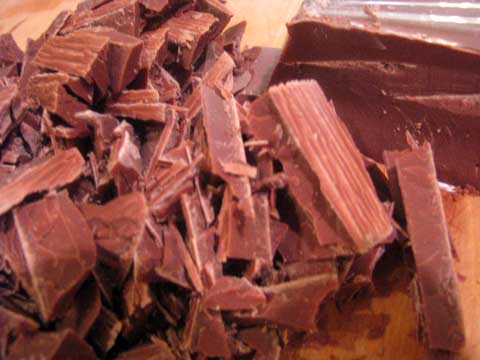 While the cookies slowly hardened from igneous to metamorphic rock* baked, I threw together the ganache filling so it would have ample time to chill and thicken. This was by far the most rewarding part of the experience, owing 100% to the enormous block of Callebaut milk chocolate I had and the many pieces that I ate while chopping it. I made a super-simple ganache of heated cream steeped with more cinnamon and a generous pinch of cayenne, poured over the chopped chocolate and whisked to combine. The pinch of cayenne produced the just right amount of back-of-the-throat heat – thank god, because the whole fricking thing was eyeballed and could easily have turned out searingly hot – and I left the liquid love in the fridge to firm up a bit.

*I’m not sure this is geologically possible.

I pulled the cookies out after about 15 minutes, and here’s what I had.

Let’s break down the many ways in which they are complete failures. If you’ve taken the time to reference the above-mentioned diagram, you should have no trouble following along:

To summarize: These cookies failed completed to measure up to a single fucking category of a good macaron. The lesson learned: Don’t try hard things.

The useless fruits of my pathetic labors.

Boy, it sure is a good thing I don’t need any desserts for the guests coming over for Christmas brunch, one of whom is a culinary school graduate!

I went ahead and filled the mutant macarons anyway, because they were there and I had all this ganache and Brian likes oddly textured crispy things. And even good macarons are supposed to sit and meld for a day or two, so maybe some kind of Christmas miracle will happen in the melding process.

Later in the day I tried out some eggnog macarons – nutmeg-scented cookies with eggnog-dark chocolate filling, and using a SINGLE batter managed to create three trays of cookies that ALL FAILED IN COMPLETELY DIFFERENT WAYS, so you have that to look forward to. Clearly I have some kind of anti-gift, and pastry programs should consider hiring me to give demonstrations on how not to make macarons.