And I don’t mean in the gross way, like with the carrot; I’ve learned my lesson there.*

No, the final delivery of the 2008 CSA is the root-vegetables-to-last-you-through-the-coming-nuclear-winter delivery. Thank god we split our share with friends, because we ended up with 20 or 30 pounds of potatoes and 2 dozen squash – and this was after a harsh freeze that killed off a goodly part of Farmer John’s crops. 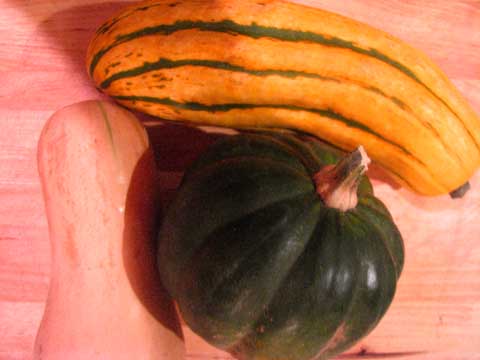 I don’t even know, nor do I care, what many of the squashes are. Here we have a butternut, acorn, and what may or may not be a delicata. I guess I could look it up, or something. That’s why you come here, right? For detailed information about food?

The potatoes are going into a makeshift root cellar – packed away in a miniature aluminum trash can and lowered into our crawl space under the sofa in our den – while the squash are just taking over the kitchen table, using up most of the seats and demanding dinner promptly at 5:30. They’re hearty and long-lasting, so we’ll probably just let them be rather than trying to come up with some kind of inventive storage solution (they have the advantage of numbers anyway).

The bottom line being that Cheap Ass Monday will probably be squash-based through the second or third quarter of ’09.

I’m sorry, I just have to let you know about this: “Unwrapped” is on right now (I like some white noise in the background) and they’re going on a tour of the Halls cough drop factory. And I could swear that Marc Summers just said that there used to be a popular American cough drop called the Whorehound. Hoarhound? Horehound? Either way, it sounds creepy and I thought you should know.

I’d wanted to do something with roasted squash and some kind of whole grain. I decided to take a wheatberry salad that I enjoy making in the summer – wheatberries, orange segments, pecans, scallions, sometimes some dried cranberries – and turn it into a warm winter salad with roasted squash. I thought many of those flavors would lend themselves well to a wintertime dish.

To up the squash ante even more, I threw together a simple dressing of balsamic, honey, a bit of olive oil and ginger with a little salt and pepper, and tossed the squash in it before roasting it in a convection oven and leaving it to roast and glaze.

Wheatberries: not actually a berry. But they are wheat. Discuss amongst yourselves.

While the squash roasted, I put a cup of wheatberries in a big ol’ pot of water on the stove. I never remember the water-to-grain proportions of all the different whole grains, so for things like wheatberries I tend to just cook ’em like pasta and drain off the extra water. When I judged that the grains had 10 minutes or so to go I added a hand of dried cranberries; why plump your berries in a separate bowl if you already have a pot of boiling water, that’s what I always say.

Take that as you will.

At the last minute, I decided I wanted some gently sauteed onions for this dish as well, so I roughly chopped one of the 7 billion pounds of red onions from the CSA box and sauteed it in a smidge of butter (really, just a smidge) until it had lost the worst of its bite but was still a little toothsome and punchy (which translates into: mostly, but not completely, translucent).

Oh yeah, and then I ALSO decided I wanted something crunchy in the mix. My summer version usually has pecans; for this iteration I toasted up a handful of pine nuts on the stove instead. 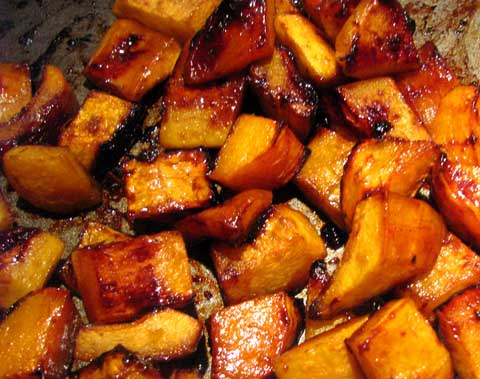 I pulled the squash out after 30 or 40 minutes, and the balsamic and honey had played right into my whims, creating a shiny, just-burnt-enough glaze on the veggies. It makes you want to lick the screen, right?

*Lie. I will totally Tweet it to the world. 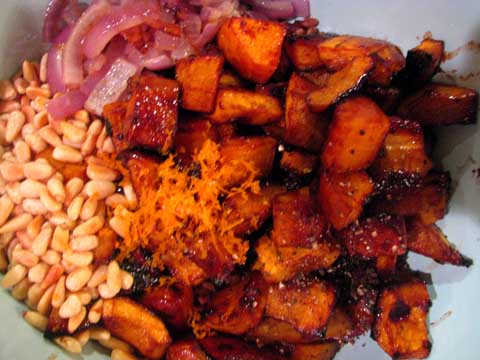 I heaped the wheatberries, cranberries, red onion, pine nuts and squash into a bowl along with a healthy dose of finely grated orange rind and all the burny, caramelized scrapings from the squash roasting pan. I’d saved a little of the squash glaze and added that before tossing the whole mess together. The squash held its shape nicely, so it really was like a composed salad and not like a bowl of mush. Not that there would have been anything wrong with that either, if it had these ingredients.

Served in a MUG! That means I can charge more for it.

This salad really was the perfect winter analogue to the summer version. Texturally, it was a hearty meal and the medium-sized mugful I ate belied how filing it was; the chewy wheatberries do give the jaw a bit of a workout. The squash was warm and sweet but with some zing from the vinegar and ginger, just as the onions were sweet but with a hint of their original raw pungency. Every bite or two had a pleasant crunch of pine nut, and the orange zest lent just enough citrusy perfume without making the dish overtly “orange.”

This is a special secret between you and me, but this dish? Is kind of good for you. The wheatberries are full of good fiber, the squash is filled with vitamins, and there’s not much necessary fat or any bacon to speak of. This could really be damaging to my reputation, so try to keep in on the down low.

(That being said, this would be TOTALLY AWESOME with some lardons thrown in.)*

Warm Wheatberry and Glazed Squash Salad
As with 90% of my recipes, this is really more of a concept than a recipe, you could swap in whatever grains or root veggies you wanted, or change up the flavors in the glaze, whatever. Really, you don’t need me.

Put the wheatberries in a large pot of water and bring to a rolling boil. Cook until chewy but no longer hard in the center, about an hour (you can cut this down if you soak the berries overnight, but who remembers to do this?). In the last 10 minutes of cooking, add the cranberries and a few pinches of salt. Drain and set aside in a mixing bowl.

Simultaneously, whisk the vinegar, honey, ginger and olive oil together. Toss the squash with the glaze (reserve a few tablespoons), adding a little salt. Spread the squash on a baking sheet and roast until soft inside and caramelized outside, 30-40 minutes. If things aren’t browned enough for you, turn on the broiler for the last few minutes of cooking. Add the cooked squash to the bowl with the wheat and cranberries.

Add the butter to a small skillet over medium heat and add the red onion. Cook until mostly, but not totally translucent, 5-7 minutes. Add the onion to the bowl with everything else, along with the pine nuts and orange zest.

0 thoughts on “Cheap Ass Monday: I have squash out the yin-yang.”