But that was too hard, so I made some English toffee instead.

There are some foods that non-cooking-type people will be really impressed when you make from scratch, even though you as a cooking person know they are actually very easy. (Non-cooking-type people, stop reading here so you don’t lose the magic.  Remember how you felt when you found out there was no Santa?).  Like layer cakes.  Chocolate mousse  Truffles.  Pretty much any candy, come to think of it.  Like toffee.  Delicious, buttery toffee, covered in chocolate and nuts.

*I know, it’s not a very good movie, but this line cracks my shit up.  In the outtakes, he says he wants to “open a bed and breakfast inside a volcano.” Also, Kenneth the page from 30 Rock is in it, and that dude is just funny.  It just happens to be on TV right now. Shut up.

The beginning of all things good.

I like to make candy around the holidays because I get a little tired of cookies.  And because I enjoy adulation, and the adulation-to-effort ration of candy is much more to my liking than that of cookies.  To impress people with cookies, you have to make really fancy-ass cookies, like macarons or something, and it was already 7:45.

English toffee is one of the easiest candies to make with a few simple tricks – truth be told, you don’t even need a candy thermometer unless you’re some kind of wuss who’s afraid of a little molten hot butter and sugar.  I mean, I used one here, but it was just to show you the safe way. 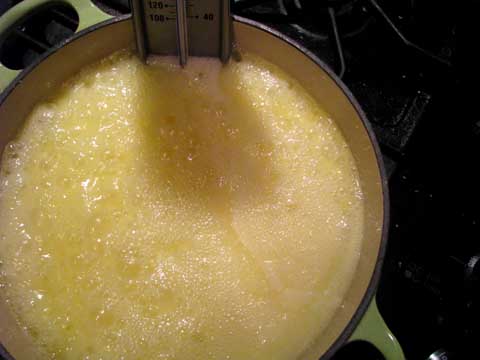 This pot contains every major food group except bacon and bourbon, but it could very easily contain both if you were so inclined.

Toffee has all of 6 ingredients: butter, sugar, water, corn syrup, vanilla and more butter.  Okay fine, five.  Technically, you can make it with just the butter and sugar, but the extra ingredients hedge your bets against the two things that could derail your toffee-making experience:

The vanilla is totally unnecessary, I just like the way it tastes. 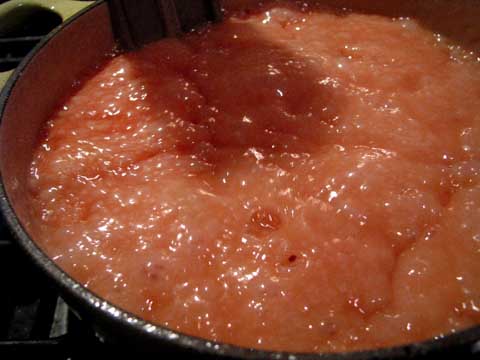 This could blind a man.  It really could.  Do with that knowledge what you will.

The rest of the instructions are as follows: Put all ingredients in a nice heavy pot that will distribute the heat evenly and keep the sugar from scorching.  Melt and bring to boil over medium-high heat.  Cook until done.  Depending on your level of candy-making skill, “done” can mean:

When I first started making toffee I went with method 1, but now I usually go with 3; one less thing to clean.  You want to keep an eye on things and don’t let the mixture get too dark/hot, or you’ll end up with an overly crunchy candy that doesn’t have the buttery crumbliness of toffee.

Also, the mixture will increase in volume as it cooks, so use a bigger pot than you think you’ll need.  I’ve used a too-small pot here, but again, that was just to show you the wrong way to do things.

I already know how easy it is, and this even makes me feel like a professional candymaker.

I poured the hot sugar onto a silpat put over a marble board to help speed the cooling, and scored it with a pizza cutter before the sheet of toffee got too cool to cut cleanly. I wanted nice little squares that I could dip in chocolate and nuts to look uber-professional.

You’ve got other options here – you can just let the whole sheet cool and then break it up my hand.  You can mix nuts directly into the hot butter and sugar in the pot, so they become part of the toffee; macadamias are my personal favorite, even though almonds are more traditional, the butteriness of the nuts just melds perfectly with the toffee.  You can also sprinkle chopped chocolate over the hot sheet of candy, let the residual heat melt it, spread it around with an offset spatula and then break it up by hand, or skip the chocolate and nuts altogether and sprinkle the hot candy with gray salt.  At the risk of sounding too Michael Chiarello-y, that shit is good.

Me, I let the candy cool and snapped the squares (okay, they were more square-ish) while I chopped some toasted almonds and melted a few bars of milk chocolate. 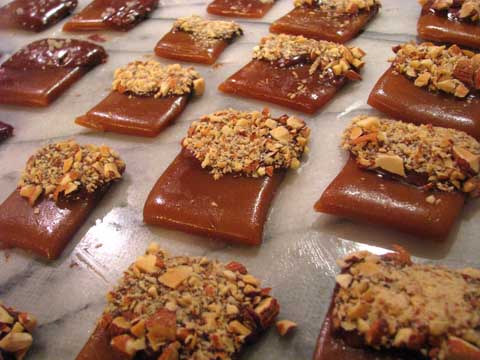 Most of the squares got dredged half-way up in milk chocolate before getting a coating of chopped, toasted almonds.  I ran out of chopped nuts with about a fifth of the toffee to go and didn’t feel like chopping more, so those last few pieces got sprinkled with gray salt (you can see them in the way-back upper left of the photo).

Here, at the end, is where the hardest part of home toffee-making comes: not eating all the toffee.  Do something with it – chop it up to put in some homemade ice cream, pack it in cute little glassine bags tied with festive ribbons all Martha-style for co-worker gifts, pack in into a metal lock-box and lower it into your roots cellar, anything.  Because you will eat too much toffee.  And it’s the end of the year and you probably don’t have any money left in your flexible spending account, so it’s a bad time to go to the dentist.

So make it, and bring it to the next holiday party you’re invited to, and let the compliments roll in while you act like that woman from the old Rice Krispie treat commercial who splashed her face with water and flour to “trick” her family into think she’d been working hard.

Put all the ingredients except the toppings into a heavy saucepan over medium-high heat, clip a candy thermometer to the pot.  Let the butter melt and whisk to combine it with the sugar, corn syrup, water and vanilla.

Cook the mixture, stirring often, until it hits 300.  If your butter does start to separate out – it shouldn’t, it never has for me – just whisk it back in.  The mix’ll  heat fast, so keep an eye on it.

Pour the hot toffee onto a baking sheet or marble board that’s been oiled or lined with a silpat or parchment.  Spread it into an even layer with an oiled offset spatula.

At this point, do with it what you will as outlined above.  If you want neat squares, let it set up a few minutes and then score with a pizza cutter.  If not, sprinkle your toppings (if any) right onto the sheet of toffee, let it cool and then break it up with your hands.

Keeps in the fridge for weeks.