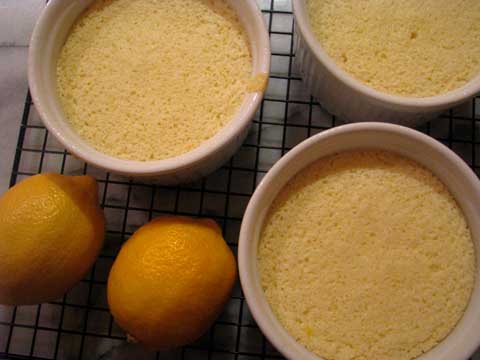 I think you all should know that I just saw a commercial for Pizza Hut’s new product, the “PANnormous Pizza.” Which leads me to believe that there is some kind of law of thermodynamics stating that as Apple devices grow ever smaller, franchise pizza products must grow proportionally larger.*

. Which apparently would rather have you pay $30,000 to attend their baking and pastry program than actually bake at home, because this recipe? Kind of sucked. 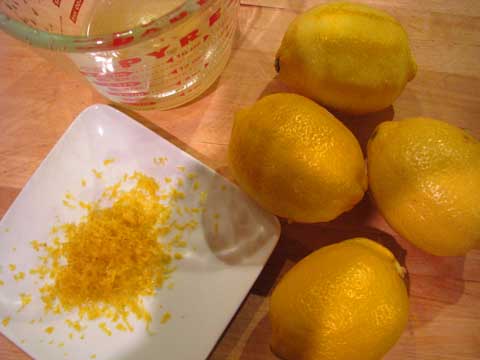 Oh, also: while I was baking these, I was listening to a Dean Martin Christmas album; it was cold and rainy, and it seemed like a good night to fill the house with comforting baking smells while listening to a drunk Italian sing “Silent Night.” So in Dino’s honor, all the captions are fun facts you may not have know about Dean Martin. (Did you know he can slur ALL THE LYRICS of “White Christmas” into one giant word? It’s like German!)

Molten chocolate cake seemed too cliche, so I went with these lemon pudding cakes. Actually, Brian went with these lemon pudding cakes; he missed out on a birthday cake since his birthday was the day after Thanksgiving and everyone was too deep in a mashed potato coma to bake, or even drive to the store to buy, a cake. He doesn’t like normal-person cakes with layers and frosting and all that shit, so these seemed right up his alley.

He once had a license plate that read DRUNKY.

The cake started like a normal cake – creaming butter and sugar (although only half a stick of butter – so you’ve gotta wonder, how good is this going to be?), beating in egg yolks, adding flour and some lemon zest. 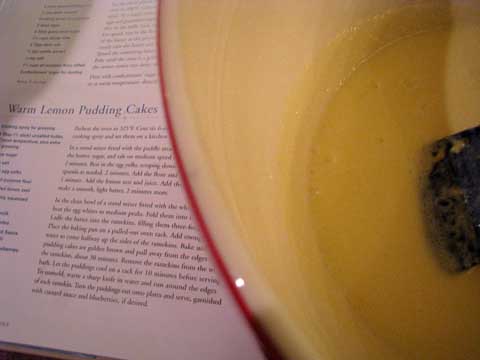 He once managed to cure himself of his claustrophobia by locking himself in the elevator of a tall building and riding up and down for hours until he was no longer panic-stricken.

Once I had a normal looking batter, I added lemon juice and milk,thus de-normalizing the batter into a pale yellow, soup consistency. Like a bisque. A raw egg and lemon bisque.

I must say, there’s something vaguely sacrilegious about listening to someone who is so obviously three sheets singing “Silent Night.” You just know that Mama Crocetti was not happy about that, and was probably embarrassed to talk about her son at her weekly rosary meeting with the other Italians of Steubenville, Ohio. All three of them. But listening to his sloshed version of “Winter Wonderland” is pure, unadulterated joy.

The Rat Pack never actually referred to themselves as “The Rat Pack,” preferring instead “The Clan.” I think we can all understand why “The Rat Pack” was more popular.

I beat the egg whites separately. I think I got them to medium peaks, but beaten egg whites are one of those things that I always seem to fuck up – I check them, I think they’re not quite ready, I panic and beat them longer, and then all of a sudden egg whites are weeping all over the place like me watching Extreme Home Makeover.

The book didn’t tell me to fold them into the batter in halves or thirds or fourths, as I’d do with a souffle or mousse, so I dumped the whole mess in at once while Dino crooned to me about living in a “Marshmallow World,” which I assume is an allusion to the land covered in snow and not some kind of drug-induced hallucination.

The liquid in Dino’s glass? Apple juice. I know, I’m as disappointed as you.

I ladled the batter into greased ramekins, plunked them into a water bath and put them in a low oven. I had a premonition that they weren’t going to turn out quite right but hey, I’d followed the instructions, right? Right.

I should probably have just listened to my gut. My gut tells me things all the time and it’s usually right. Like, right now, it’s telling me that I’m not going to want to go to work when I get up tomorrow, and I bet when the alarm goes off at 7:30 my gut will be proven correct.

At age 15, he dropped out of high school and became a boxer called “Kid Crochet.”*

While the cakes were in the oven I put together the custard sauce that the book suggested serving alongside. I set some milk, cream, sugar and vanilla to heat, whisked egg yolks with more sugar, and set up my egg yolk tempering-custard straining-ice bath apparati.

When the milk mixture came to a simmer I slowly whisked half of it into the egg yolks and then returned the tempered eggs to the pot and cooked the mix until it coated the back of a spoon. I’m a bit of an obsessive custard- and curd-maker, so I hovered over the stove and stirred the custard like custard stirring was going out of style.

*Wussiest boxer name of all time beside “Jennifer Aniston.” 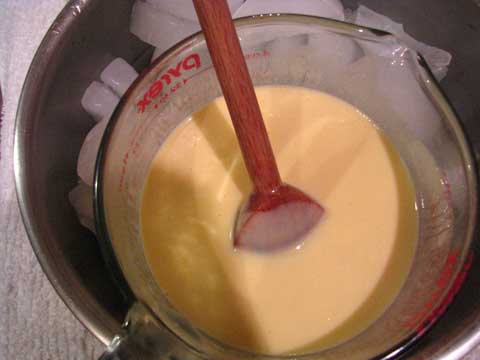 He was drafted into the Army in 1944 and served one treacherous year serving in Akron, Ohio.*

I strained the finished custard into a mixing cup and sunk it into an ice bath to help things cool down faster; I thought the chilled sauce would be nice alongside the still-warm pudding cakes.

*Serving in Ohio is no joke. We’re talking about the state that once managed to set Lake Erie ON FIRE. A LAKE. ON FIRE. Think about that. 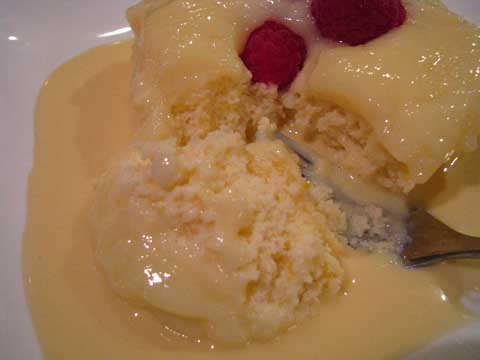 The secret to the success of the Martin and Lewis show: They completely ignored the audience and did whatever they hell they felt like.

I baked the cakes nearly 10 minutes longer than indicated in the recipe because they just weren’t coloring on top, but I had to pull them out eventually – with the top still not really “golden brown” – before the top half was baked into a lemony brick. And I was still “rewarded” with a gloppy mess when I turned them out of the ramekins onto plates. And not a pudding-y cake that progressed gradually from “cake” to “glop,” a cake that morphed very abruptly from dry and cooked to gelatinous.

Not only that, but the color of the custard sauce and the finished cake were one and the same, making for the most boring plate ever, a sad collection of pale yellow substances of varying viscosity. I plopped a couple of (pathetically out of season) raspberries on top, but all it did was highlight the depressing sameness of everything else.

Of course, I ate it anyway, because who’s going to turn down cake? And it tasted like it looked: sweet and uninteresting, with not nearly enough lemony punch for me.

Sigh. At least I had Dino.

0 thoughts on “Thursday Night Smackdown: Put a little puddin' in your pop”