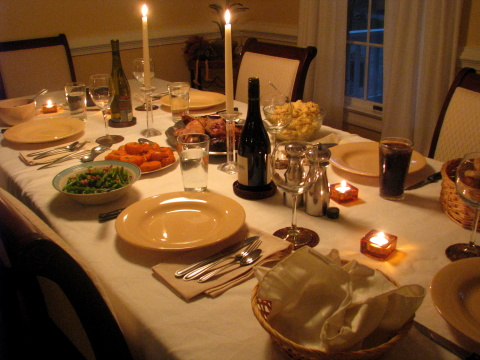 My sister is like the poor woman’s Martha Stewart, except that every time you set a holiday table with unpressed linens, Martha pays a coolie to kill a Chow Chow. 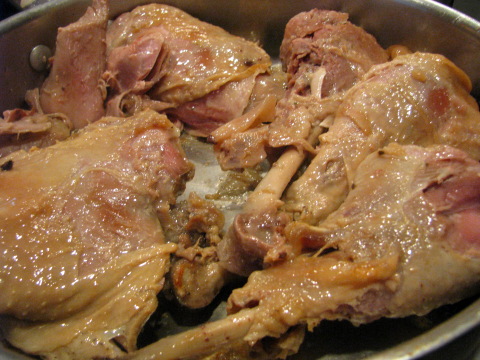 Turkey leg confit, I have come to firmly believe, is the only way turkey legs should be prepared and served.  For a small administrative fee, I will issue a dispensation for deep-frying. 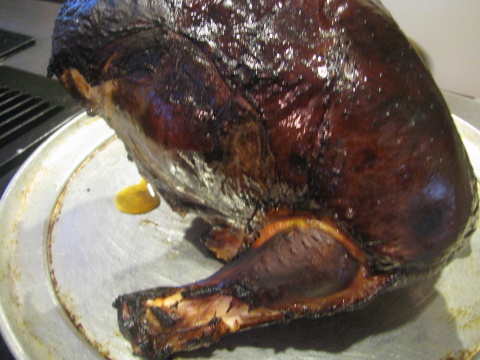 Mesquite-smoked turkey breast, resting propped up on his poor little wing-stumps.  A study in rich mahogany. 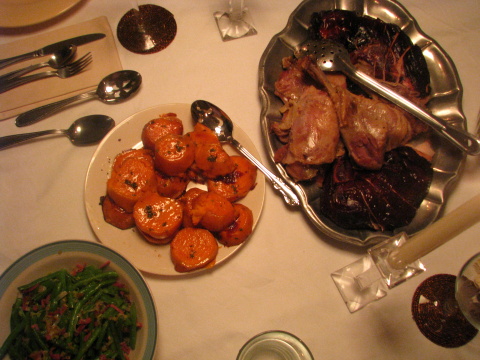 Turkey two ways, roasted sweet potatoes with maple-thyme glaze, and green beans with country ham and leeks.  Not pictured:  mashed potatoes; stuffing, with sausage and without; a veggie medley of parsnips, carrots and asparagus; yeasted dinner rolls; cornbread muffins and gravy two ways for the turkey duo (plain ole gravy for the smoked breast, gravy with green peppercorns, leeks, shitake and preserved lemon for the confit). 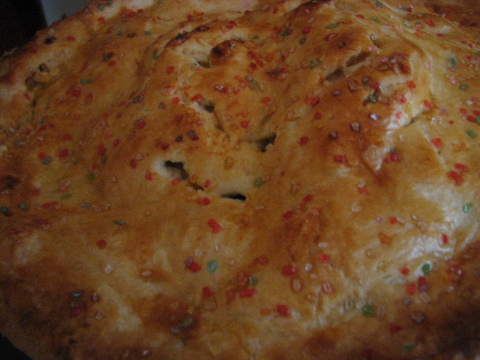 I guess we were out of harvest-colored sanding sugar, so the apple pie helped usher in the Christmas season.  Other pie selections included pumpkin, made from a recipe in the last issue of Cook’s Illustrated that is truly killer.

And then there was much lolling around on the sofa, complaining about our various levels of fullness (my personal level: “fucking stuffed”) and farting with varying levels of impunity and/or shame.  My sister had to contend with both farting (with impunity, without shame) and hot flashes, causing her to lunge out the front door into the chilly air (which she declared “really nice”) every 15 minutes, for which I am deeply sympathetic but maybe if you’d iron your damn napkins Martha wouldn’t rain this kind of vengeance down on you.

Then we went to bed and slept for TWELVE AND A HALF HOURS, and then it was nighttime again and time for leftovers:

My brother-in-law was concerned that frying slices of stuffing on a griddle was a sign that he’d been living in the south for too long, but it’s not like they were deep fried or anything.  Also on the menu: leftover turkey and gravy, everything-but-the-kitchen-sink vegetable bisque, and salad.  The salad was treading dangerously close to “healthy,” so he saved it with cheese and country ham. 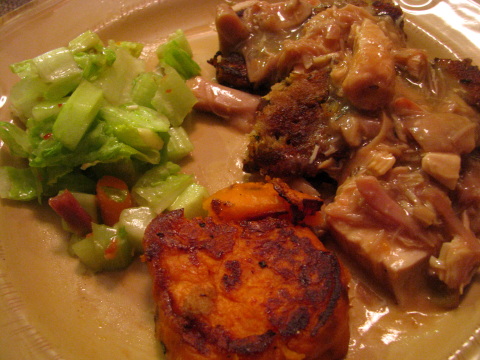 My verdict: despite the presence in North Carolina of poisonous spiders that bite, causing you to have to rush to the emergency clinic in fear that you’ve developed a third nipple for antibiotics the size of horse tranquilizers, a most pleasant holiday.

These pictures are for Leigh, who couldn’t be here for Thanksgiving because she’s stuck studying abroad for a year in Florence.  If you here a faint whistle in your ear, that’s me playing the fuck out of the tiniest violin I could find.  I hope you can hear it, because I’m playing it as hard as I’ve ever played it.

0 thoughts on “Thanksgiving '08: In Pictures”