And that includes eating Sticky Toffee Pudding for dinner. Which I just did, and I could not possibly be less sorry. In fact, I’m feeling so magnanimous after eating it that I’m willing to overlook the ridiculous length of this book’s title AND the fact that (as listed on Amazon) it has TWO COLONS: Desserts by the Yard: From Brooklyn to Beverly Hills: Recipes from the Sweetest Life Ever, by Sherry Yard (GET IT?), official pastry chef of Wolfgang Puck’s Spago empire.

I Wonder: Are all the colons necessary?: A grammatical conundrum: That I can top: Suck on that.

Wow, when you exaggerate it like that it almost becomes poetry. Really terrible poetry.

I couldn’t find any decent dates, so I used these scraps of bark.

I’ve never actually had sticky toffee pudding before tonight except in the Haagen Dazs Sticky Toffee Pudding ice cream, which I think is sweet enough to eat through a sheet of solid steel in under a minute, and yet I’ve long been firmly convinced that I love it. And then I read the recipe through and discovered that it’s filled with dates, which I’m not fond of (where “not fond” = “yuck”), and was still convinced that I love it. I mean, just look at the words: Sticky. Toffee. Pudding.* I’m pretty much sold on anything with “toffee” in the name. Surely, the dish must be at least as good as its individual parts, if not greater than.

I dutifully chopped my dates – Sherry Yard suggests medjool, PathMark suggests SunMaid – poured some boiling water over them and went downstairs to watch The Office for half an hour.

**I feel like there just haven’t been enough asides lately.

Somehow, I managed to miss the end, so I don’t know what Pam said when Jim told her he’d bought his parents’ house for them. Whatever it was, I’m sure it was Madcap! and Zany!

I gave the soaking dates a sound mashing into the hot water and mixed in some baking soda and let them sit a little longer while I started the batter. And I gotta tell you, I’ve never used one of my own pictures as a Frig? but semi-liquid mashed dates that are bubbling ever so slightly are a prime candidate. I’ll surprise you one day.

The batter had plenty of brown sugar for a nice deep sweetness and two little extra flavor boosts whose origins I’m not sure of; I don’t know if hints of orange and coffee are traditional to sticky toffee pudding or whether they’re Sherry Yard twists. I’m sure someone will soon set me straight. 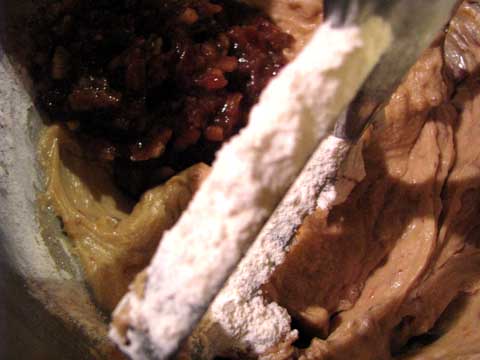 It’s accidental that the date mixture is shrouded in mystery here, but I think it’s probably better that way.

The date mixture and flour went into the butter, sugar and eggs in alternate stages, until I had a smooth, semi-thick batter studded through with little bits of not-quite-mashed up date.

I got one of those bits when I licked the beater – whatever, I know you do it too – and was still not a fan of the date. I put my trust and faith in the baking process, and in the ladleful of toffee sauce I planned to spoon over my serving.

Exhibit A: The unpleasant bits in question.

Into a Corningware dish that looks like a giant ramekin (my compromise, since Sherry suggests either individual eight-ounce ramekins or one nine-inch cake pan), into the oven for 50 minutes, and it was time for toffee sauce and the beginning of ER. Yes, some of us still watch ER. No, we can’t explain why.

I’d thought the toffee sauce would be more like a traditional caramel but with dark brown sugar replacing the white; the ingredient list was certainly similar enough: sugar, cream, a bit of butter, some corn syrup for crystallization insurance and a vanilla pod and seeds. I like the chicken aspect of making caramel, of seeing how long I can let the color deepen before I dump in the cream, as well as the ensuing frantic bubbling and spattering that follows.

Sherry’s toffee is sedate in comparison. Everything goes into the pot at once, is brought to a simmer, and cooks for 10 or 15 minutes till it coats the back of a spoon. No daredevil timing. No liquid hot sugar magma. No potential for third-degree facial burns, no need for protective eye-wear. LAME.

*If only there were such a thing, but for actual dates: “That sucked, and I’d like those three hours of my life back, please.” Blind date insurance would reimburse double.

Would you mind terribly socking it to me?

The cake came out of the oven with quite a noticeable dent in the center. I chose to see it not as a flaw, but as a receptacle for more toffee sauce. I poked the cake liberally with a wooden skewer and poured most of the sauce on, retaining a little for plating. It soaked in almost immediately, leaving a thick glassy coat on the cake’s surface.

It was right at this point that actual dinner – pizza – arrived at the door, so I guess I could have eaten that first and then had this for dessert, as nature and Sherry Yard doubtlessly intended. But I like to exercise my grown-up prerogative sometimes (it often manifests as eating foodstuffs at inappropriate times, like a bag of Honey Mustard and Onion pretzel bits for breakfast), so I plated up and dug in.

Admit it, you are totally jealous.

To my generous scoop of pudding I added an additional spoonful of toffee sauce, some barely sweetened cream whipped with a touch of orange oil to pick up the undertones in the pudding, and a bit of orange zest included solely to keep the photo from looking like a bowl of dog food.

As it turns out, I was so, so right about loving sticky toffee pudding. This is some seriously good shit. Sweet, yes, but a lovely deep caramelly-molassesy almost exotic sweetness. The offending date bits had totally melted away into the pudding, creating a dense, wonderfully moist cake. The warm sauce bound everything together and added a layer of impossible richness, while the cream was a nice counterpoint. I LOVE STICKY TOFFEE PUDDING, and I predict that I will need to stop myself from eating the leftovers for breakfast instead of the pretzel bits.

21 thoughts on “Thursday Night Smackdown: I'm a grown up and I do what I want”