It is, therefore, not surprising that when I got home I wanted something quick, warm and nourishing (along with, of course, cheap). It took about ten minutes to toss together this fettuccine with ricotta and a big ol’ heap of swiss chard with garlic and chile.

If only I had eaten this for lunch instead, at least I could have punctuated the meeting with a couple of bathroom runs. Live and learn.

This pasta is totally unoriginal, and I own up to that. In fact, I stole it from myself: it mimics a grilled pizza to which I was addicted for much of the summer. Earthy, a little sweet, with some bitter undertones, swiss chard is like an amped-up spinach that pairs fantastically with garlic in great quantity and a good peppery olive oil and some cheese for a smooth richness. It also plays well with chile and lemon, flavors that didn’t make it onto the pizza but were welcome in this bowl of pasta.

I started with an entire bulb of garlic, thinly sliced and cooked slowly in olive oil to flavor the oil and bring out the garlic’s sweetness.

Granted, it was a bulb of CSA garlic and only had six cloves, but still. They were REALLY BIG cloves.

While the garlic got nice and toasty, I painstakingly rinsed the chard leaf by leaf: chard is some gritty shit, second only to leeks, and nothing ruins a dish faster than feeling as if you’re eating sand. (The only time eating sand is not only acceptable but desirable is when eating salami-and-cheese on a hard roll while at the Jersey shore.)

Am I supposed to know who Warren Sapp is?

I heaped an enormous pile of roughly chopped chard into the saute pan, including some of its almost unnaturally-cheerful bright-red stems, and let it cook down and soften. The garlic continued cooking as well, and the continued cooking coupled with the red dye exuded by the chard turned the garlic a gorgeous caramel color. Since I hadn’t used large chunks of stem – which are completely edible and very tasty, but require a bit more cooking – wilting the veggies down and cooking off their excess liquid only took a few minutes.

The pot of water that had been on the back burner since I started cooking the garlic had come up to a rolling boil, so I salted it and added a package of fresh fettuccine left over from last week’s regrettable Smackdown.

Also: Brooke Burke? Having been married to Dave Navarro doth not a star make.

I fished the cooked pasta out with one of those spaghetti-scooper-thingys – mine is lime green and made to look like a dragon, how fucking precious is that – and plopped it directly into the pan of chard along with a few scoops of ricotta, a sprinkle of dried chile flakes and enough chicken stock and pasta cooking water to coax the cheese into coating the pasta and creating a sauce.  A few tosses, a pinch of salt, and dinner was served 15 minutes after I started. 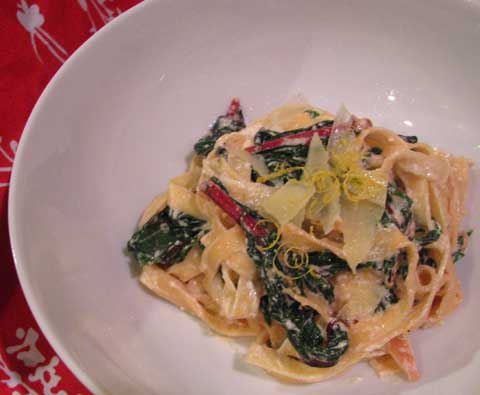 Have you ever cast a vote for a participant on Dancing with the Stars?  If so, please tell us in the comments.  I promise that we will not make fun of you.

Warm?  Mine not so much, because the plate sat out while I took a bunch of pictures, but Brian’s looked pleasantly piping.  Lukewarm food: the eternal bane of the food blogger, n’est ce-pas?

Quick?  Yes.  Nourishing?  Yes.  Swiss chard is ridiculously good for you – nice and fibery, with non-negligible amounts of vitamin C and iron.  Garlic keeps vampires and colds away; my mom used to chew whole raw cloves to ward off sickness, I prefer to take mine in a form more like this one.  And ricotta adds some needed protein. Okay, and fat, but just keep thinking about how good for you the chard is.  Or don’t, because who cares?  It’s not like I ate a pound of cheese.

Tasty?  Definitely.  The creamy ricotta was the perfect foil for the mildly pungent chard, and the garlic was most definitely present but in a sweet, nutty form.  The chile brought just enough heat to make this perfect for a slightly chilly night, and a last minute sprinkle of lemon zest and some kind of hard, salty Italian grating cheese that I found in the deli drawer and hope was still good added some fresh little punches.

Fettuccine with Garlicky Chard and Ricotta
I could write out a recipe for this, but it’s really more of a method; you could use any kind of dark leafy green you wanted (including frozen spinach, which would really help bring the cheap).  So here’s what you do:

Add a few tablespoons of olive oil to a pan over medium-low heat.

Add a copious amount of minced or sliced garlic and cook slowly until the garlic is soft and golden.

Add a big pile of greens and wilt ’em down.  A BIG pile, because when greens like chard or spinach wilt, they wilt.

Add your cooked pasta to the pan of greens along with a few scoops of ricotta and some stock or pasta cooking water.  Add whatever other flavor agents go with the green you’re using (like, if I had used spinach I would have added some nutmeg, because spinach + dairy + nutmeg = delish).

There, you did it.

15 thoughts on “Cheap Ass Monday: Roughage! Get your roughage here!”