When you think about it, there’s nothing really inventive or groundbreaking about basing a cheap meal around pasta.  I mean, that’s kinda the point of it, right?  Somehow, though, making the pasta yourself tarts it up enough so that you don’t feel like a total toolbox saying, “Hey, internet, did it ever occur to you that PASTA is an easy and economical meal? I know! Go figure!”

There wasn’t much standing between the helpless yolks and the angry, pointy shell invaders.

Plus, pasta you make yourself just plain tastes better. And if you invite friends over for homemade pasta they will think you are “le merde trés chaud,” or “hot shit” for those of you not up on your culinary French.

For this round of cheap ass pasta, I decided to make my first foray into the magical yet dangerous world of ravioli.  A buttercup squash from last week’s CSA box has been sitting on the counter all week, and during the brief periods at night when I take off my protective tinfoil hat, it calls to me: “I, along with some thick cut, applewood-smoked bacon, would be delicious if roasted, mashed and stuffed into some pasta dough. Yes I would.”  Who am I to deny such a siren song. Would you? No.

I made an eggy-er pasta dough than the one I usually use for regular cut or hand-shaped pasta, trying out a recipe from the French Laundry Cookbook

. (That makes the THIRD TIME I’ve used it now, and I’m pretty sure that entitles me to a free meal at Per Se, or, at the very least, a tote bag or commemorative pen.)  The Keller recipe made a sturdy, smooth, sunshiny bright-yellow dough.

This pasta dough rocks the vote.

While the dough was resting, I hacked into the buttercup squash, which I unfortunately failed to photograph prior to dismemberment.  So I will be the Jane Sullivan to your Helen Keller, at least where winter squash varietals are concerned.  The buttercup is smallish (1-2 pounds) , squat and round, and looks not entirely unlike an enormous mutant dark green pattypan, or like a kabocha squash.  If you don’t know what either of those look like, it looks like a little green flying saucer about six inches in diameter.  When you hack it open, you are met with unexpectedly bright orange, sweet-smelling flesh and pumpkin-esque seeds.

I chopped the buttercup into several large rough chunks, tossed them with a smidge of olive oil and salt, and set them to bake off on my oven’s convection setting. (I’d written off just boiling the squash, which wouldn’t have concentrated and caramelized the flavors the way roasting does; I also didn’t want the flesh to take any extra liquid on board, because I needed a smooth, non-runny pasta filling).

Please, little buttercup, won’t you stay a while?

About 25 minutes later, the squash was soft to the touch and deeply fragrant.  I pulled it and left it to cool down a little, and took advantage of the still-hot oven to toss in some thick-cut bacon.

Am I the only one whose main association with the “buttercup” song is “The Three Amigos”? I’d hoped this might change that. It hasn’t.

This thick-cut bacon – I would tell you the brand, but that would involve getting up and walking to the fridge to check, and I’m sure you know how likely I am to do that – was a fine example of the species.  Not “thick-ish” or “thicker than other brands” or “less thin than some”, but actually, objectively thick – about 1/4″ a slice.

My apartment? It smells SO GOOD.

Am I the only one who finds this image vaguely creepy?  Like something is going to pop out of all those little pods. It’s probably problematic that I feel that way about something I myself made.

Once the bacon was out and drained on some paper towels, I threw the filling together.  Which I also forgot to take a picture of, because apparently I don’t care about anything tonight.  I scooped the soft squash flesh away from the skin and beat it smooth with a tablespoon or two of cream (mascarpone would be great here, too), mixing in some dried thyme and sage.  I diced the bacon into lardon-sized pieces and folded them into the squash, reserving a few bacon bits for final plating.

The Keller dough was nice and elastic and a pleasure to roll.  I cut my lump of dough into quarters and rolled each one into a roughly 5″x12″ shape that ranged from somewhat recognizably rectangular to geometrical impossibility; such is the shitty job rusticity that comes with hand-rolling.  I spooned about two teaspoons of squash at intervals along the dough, folded the dough over the filling and pressed around around the little mounds to get any extra air out and help the seal before cutting the individual ravioli free with a fluted pastry cutter.

After an initial test batch that was dispatched to the garbage can, I ended up with a pretty little pile of somewhat professional-looking ravioli, if you normally purchase your fresh ravioli from a store run by crackheads.  They took a two or three minute dip in a big ol’ pot of boiling water, and I fished them out with a strainer as they floated to the top.

*NB: When Thomas Keller says you can pipe filling in a straight line along the dough and the pasta will self-seal as you cut each piece free, HE IS LYING TO YOU.  I don’t know why he would want to lie to you; you’ll probably want to take some quiet time and think about what you did.

While the pasta cooked, I tossed a tablespoon of butter into a small skillet; when it started to brown, I added some chopped hazelnuts and, eventually, the leftover bacon bits.  So all I did was melt some butter and toast a few spoonfuls of nuts, but now I get to tell you that I had squash, bacon and sage ravioli in hazelnut-brown butter.  Fancy, meet pants.  Oh, you already know each other? Lovely!  I could also have grabbed a few fresh sage leaves from the backyard and fried ’em up for a garnish, and then I’d be justified in charging you $16 for this plate.

I drained the cooked pasta well – you don’t want to water down your butter – and tossed it quickly in the brown butter; not enough to fry it, just to coat.  Once on the plate, I added a few shavings of sharp pecorino, which I believe ups the price to $17.50 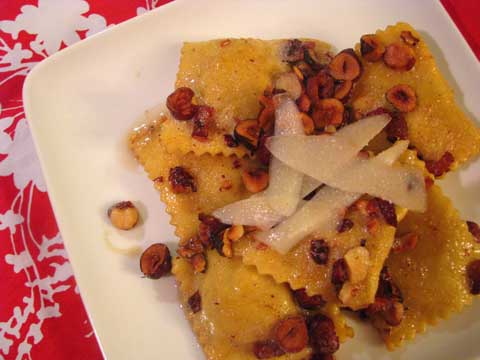 Let ye not think that freah pasta is too much of an undertaking:  From the time I walked through the door after work to the time I sat down to eat, 90 minutes elapsed, and of those 90 roughly 15 of those minutes were spent laying on the couch in a daze and another 20 or so reading the new Pottery Barn catalog on the crapper.

These were some tasty ravioli:  The pasta had just the right amount of chew, the filling was a nice balance of salty and sweet and the nuts added some needed textural contrast.  The real star was the buttercup squash, which might just be my new favorite squash.  It’s creamier than acorn, but more richly flavored than butternut; it could stand in for either one of those or for sweet potatoes without missing a beat.  Dear Farmer John, More buttercup squash next week, please.  Sincerely, Me.

I’m writing out a recipe for this dish, but be forewarned: I measured exactly nothing, so this should be taken more as a set of guidelines than as a recipe.

Winter Squash, Bacon & Sage Ravioli in Hazelnet Brown Butter
serves 2 as a main course or 4 as a first

Toss the squash with the olive oil and salt.  Arrange the chunks on a baking sheet.  Roast until tender and easily pierced with a fork, about 35-40 minutes (a bit less if you have a “convection” setting).  Set aside on a plate until cool enough to handle.

Drop the oven to 375, lay the bacon out on the same baking sheet and bake to your preferred level of bacon crispiness, 10-12 minutes.  Remove the cooked bacon to paper towels to drain. Cut it into a large dice.

Once the squash has cooled down, scrape the cooked flesh out of the skin into a mixing bowl. Mash the cooked squash with the cream; you can use a hand or standing mixer if you’d like, to get it really creamy and smooth.  Stir in the thyme and sage, then fold in the bacon.

By hand or with a pasta roller, roll the dough out into long, flat sheets about 5″ wide.  Lay a sheet of dough out on your workspace, and drop spoonfuls of the filling (1-2 teaspoons is a good amount) at intervals along one edge of the dough, leaving an inch between each one.  Fold the other edge of the dough over to cover the filing, and press around the filling mounds fo get any extra air out and deliniate each one.  Cut the ravioli apart using a fluted pastry wheel or a paring knife.  Be sure to cut the long seam as well, to make sure it’s well-sealed.

Heat a large pot of water to a rolling boil; add a pinch of salt and then gently put in the ravioli (I like to lower them in on a spider).  Cook for 2-3 minutes, until the ravioli float to the top.  Gently but thoroughly drain.

While the ravioli cook, heat the butter in a medium skillet over medium heat.  When it starts to foam, add the hazelnuts; cook until the nuts are fragrant and the butter is brown.  Add the ravioli, tossing gently to coat.  Serve immediately.

24 thoughts on “Cheap Ass Monday: My Little Buttercup Has the Sweetest Smile”