Hi everybody. How about a big round of applause for Claudia. Nice job, fret. Another guest host here, trying to keep the smackitude alive (and you entertained) while Michelle pours her life savings down the slots in Atlantic City recuperates. Now this post was originally going to be for Cheap-ass Monday, but Claudia bogarted that, so it will just be a regular old catchy-theme-challenged post that’s differently fun to be around, and coincidentally also suffering from cheapness of ass.

I had this idea a while back, during one of many sleepless hours that often ensue after my 4-year old Son has come into our bed in the middle of the night and woken us up. It’s way better now than it was when he would immediately turn perpendicular to us (always with his feet facing me, and kicking me in the head all night) but it does still make it very hard for me to get back to sleep. So I think about new combinations of things that might taste good, taking advantage of the free-associating that comes more easily when one is tired, and trying not do dwell overmuch on how fucked my tomorrow is going to be. Or sometimes I get up and read food blogs, and try not to think about how fucked my tomorrow is going to be. In any case, the fuckedness of the morrow is the salient point.

I like to make pasta from scratch, and lately I’ve been flavoring it with things to make it more interesting. The hand-cranked pasta maker takes a little time, but my Son loves to help, so that makes it take even longer. I always looked forward to having my own little child laborer to save me time on various chores, but it looks like he’s going to be at least six before he can sew fake Gucci wallets and sell them on Canal Street. Anyway, our mustard greens are loving the cool weather, so I had them on my mind, and this idea presented itself as I tossed and turned.

The innocent mustard in its natural habitat, just prior to meeting its violent demise.

First, the pasta: two eggs, about a cup and a half of flour, and a good glop of Dijon mustard. (If you don’t have any Dijon mustard, just flag down the next Rolls you see and ask nicely.) You make a well in the flour, add the eggs, and beat them in ever-larger circles to incorporate all the flour, then knead it for a minute and put it in the fridge for half an hour or more. Normally I add a little water to get it moist enough, but the mustard did that. A little salt might have been a good idea, but I’m not Superman, for crying out loud.

The dough, moist and willing.

I took the greens and spun them in the food processor with some walnuts, an egg yolk, salt, pepper, some leftover roasted kabocha squash, and a little truffle oil. I love truffle oil. Yes, I feel like an asshole paying $16 for a tiny bottle, but a few drops of truffle oil in the right places will GET YOU LAID. So there’s that. Also, it tastes really really good. Normally I never cook with it, since the aroma is fragile, but I wanted it in the greens, and the pasta-encapsulation thereof would have made that hard later on.

We rolled out the pasta, and assembled the ravioli. Sometimes I like to put a couple of parsley leaves in the top sheet, since they get all stretched out and beautiful, forming a delicate green lace-like leafy pattern that delights and surprises people. Almost as much as the fact that I’m heterosexual. I dropped them in small batches into boiling salted water until they floated. As with goldfish, that means they’re dead, and thus safe to eat. 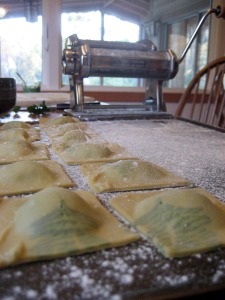 The ravioli, cowering before their maker.

For the sauce, mustard appeared in a third form- the seeds. We have a good tub of leftover nasturtium butter (nasturtium leaves and flowers puréed in softened butter with a little lemon juice and salt) that I made for a pot-luck brunch on Sunday, so since we didn’t have any regular, manly butter, I used the flower butter instead. (Not that there’s anything wrong with that.) I gently browned the butter with some mustard seeds popping away in there, and a couple of sage leaves because I’m pretty sure it’s illegal to brown butter for use as pasta sauce in October without the addition of a couple of sage leaves.

Overall, a success; I’ll tinker with the proportions a little, since the greens are strong and really open up one’s third nostril, but it was well received and did showcase Nature’s many-faceted gift that is mustard. The other good news is that I didn’t have to calculate the cost per serving of this meal- and I would have made it up anyway. But you can be sure that even just divided three ways, this fell well under the $5 per person limit. The wine, though- not so much. But you try not drinking while a 4-year-old makes your ravioli.

Also, there was salad.

I’ll be back on Thursday for the down-smackingest smackdown that you’ve seen since last week, in which I hope to make Thomas Keller my bitch proud. Meantime, let’s all send Michelle some good vibes.

0 thoughts on “Excuse me… do you have any Grey Poupon?”