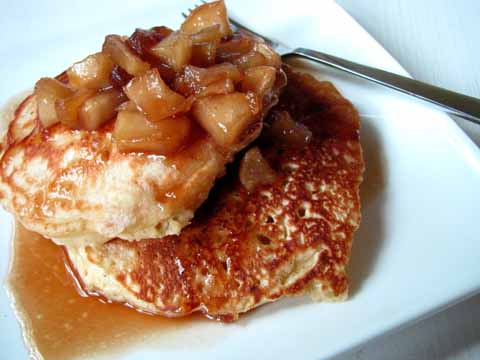 *Because a dutch baby is a kind of big, fluffy baked pancake often filled with apples.  Not because I’m trying to come on to you.  Although if I knew you, I’m sure I TOTALLY would. 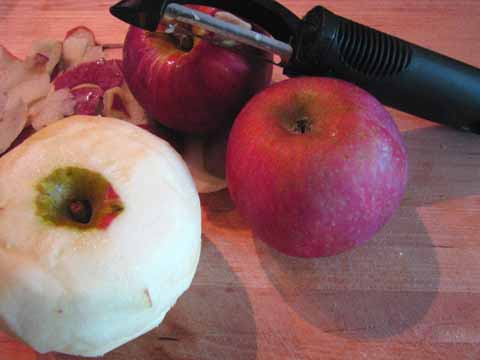 The only person I recognize in the current season of “Dancing with the Stars”: Cloris Leachman.  Because I am seven thousand years old.

What is it about going fruit picking that causes otherwise normal people to lose all perspective on the amount of fruit they are feasibly able to consume before the picked fruit starts to rot and turns into the launching pad for a fruit fly junta in their kitchens?  I mean, I love an apple, especially a fresh, crisp, non-mealy, non-pesticidey, fresh-picked Jonathan apple.  But do I love these apples 13 pounds worth?  I’m really not sure.

So I’m eating an apple a day, and will continue to do so despite the fact that they’re having no bearing on some upcoming doctors’ appointments I’m not particularly looking forward to,* but I still need more ways to use up the apples.  I have some plans for muffins and maybe a tarte tatin, but 13 pounds is a LOT of fucking apples.  So: apples for dinner, form of spiced maple apple compote over pancakes.

*Transvaginal ultrasound, anyone?  How many apples a day do I have to eat to keep the radiologist trying to stick a wand up my hoo-ha away? Probably that’s more like 6 or 7, and I just can’t take all that roughage. 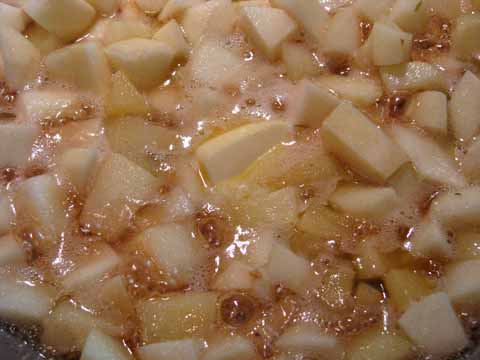 I will admit it here:  I do not know who the Jonas Brothers are, nor do I give a half, or even a quarter of a shit.

Breakfast for dinner is usually a pretty easy way to go cheaper.  I may actually have already pulled this, but I’m pretty sure I don’t give a crap.

I peeled up some apples (NOT ENOUGH OF THEM) and tossed them into a skillet with some butter to soften. 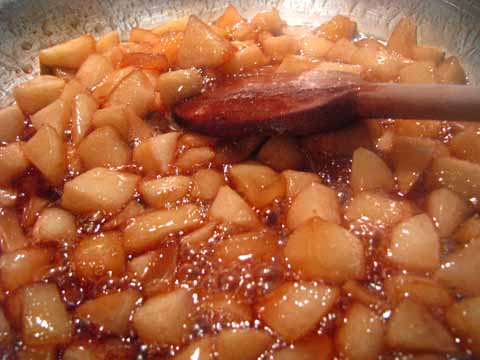 Oh shit, Lance Bass is on “Dancing with the Stars”?  Snap!

After 5 minutes or so, I added a few turns of the pan of maple syrup, some dark brown sugar, ground ginger, a splash of lemon juice and a pinch of salt and let the sugar, syrup, butter and apple bubble into a fragrant dark brown sauce.

Are any of you still wasting your money on Grade A “fancy” maple syrup?  If so, you should stop,  Grade B is cheaper and has a richer maple-y flavor without being overpowering.  Also, if you’re using Ms. Butter-worth’s?  Stop that too.  It’s embarrassing.

I left my pan on the stove’s simmer burner and got out of the way while Brian made the pancakes; I like to get out of the way whenever he’s engaging in a project, because then I get to skip the frustration that’s seemingly inherent to his process and show up at the end to enjoy the spoils.  Also because I was in the middle of a book I really wanted to get back to.  The upshot is that I have no photo of pancake production and I’m relying on your abilities to successfully recall the appearance of pancakes you may have had in the past.

(Hopefully no one is like, “I was totally on board with this recipe, but WHAT THE FUCK IS A PANCAKE, HELP ME, PLEASE.”  Flip ’em when you see the bubbles forming on top, that’s all I can tell you.) 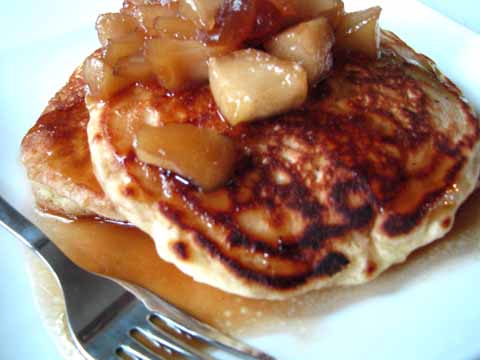 For those interested in such things, the pancakes came from Bittman’s How to Cook Everything, which you should all get especially since the paperback is only, like, $11. Brian used the”basic” recipe, which makes a pretty tasty but dense pancake; I think we’ll try the “light and fluffy” next time.

The gingered maple apples tasted like autumn, making this an awesome “Welcome, Fall!” dish.  The fruit still had some bite, the ginger added warmth, and the syrup and sugar worked nicely in tandem, each deepening the other.  The squeeze of lemon kept it from getting too cloying, and the butter made things delicious because it’s butter.

I kinda wish I had made extra of the compote because it would be excellent with a warm bowl of steel-cut oats, mixed into some quinoa for breakfast or poured over some homemade cinnamon ice cream; unfortunately, I just didn’t have enough apples.

Oh wait, that’s someone else I’m thinking of.

Also: BONUS PORK!  From a weekend BBQ at my B & SIL’s.  Look at those fucking pink smoke rings and then just TRY not to weep: 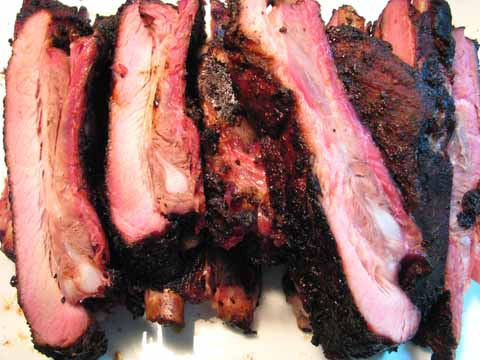 I drink your milkshake.

Gingered Maple Apples
This will make extra for your oatmeal.
4 crisp-fleshed apples, like Empire or Great Northern (or whatever you like, really), peeled and cut into a large dice
4 tbsp. unsalted butter
1/3 c. grade B maple syrup
1/3 c. dark brown sugar, packed
2 tsp. ground ginger
1/2 tsp. salt
Juice of 1 lemon

Melt the butter in a wide skillet of medium heat.  Add the diced apples and cook for 4-5 minutes, until they begin to soften.

Add all the other ingredients except the lemon juice and simmer for another 10 minutes until the apples are soft but not broken down and the butter, syrup and sugar have cooked together to make a sauce.  Sauce should simmer vigorously but not boil.

Stir the lemon juice in during the last few minutes of cooking.  Taste, and adjust the salt and lemon if needed.  Serve immediately or later, over everything.