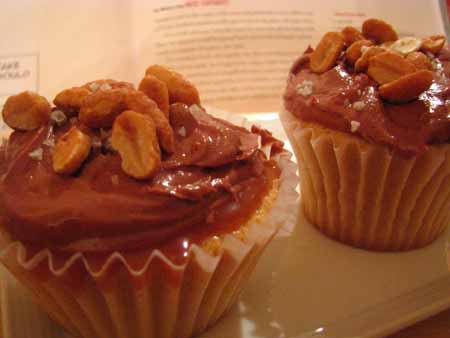 My nuts are salty, yet sweet.

I had big plans for tonight. Big. Huge. I left work at a reasonable hour – 4:30! A train was leaving just as I got to the subway station. I was all set to get home around 5, scour the cookbooks for a recipe that would use up all my CSA tomatoes and tomatillos and the pork loin I had defrosting, smack it on down, and then make cupcakes for the admin assistants at my office who’ve proofread 300 pages of copy for me this week, because I am a fucking sweetheart.

A few minutes into my walk home, I start to get dizzy; I’m withdrawing from Paxil, which was incorrectly prescribed to me, and the side effects are more fun than an ice pick to the ear. So, okay, I’ll take breaks and sit down when I need to.

A few minutes later, my brain suddenly decides to remember that it forgot to send the impulses that would direct my hand and arm to put my keys into my bag when I left the house this morning. Slacker brain also neglected to send the “put cellphone in bag” signals. I duck into nearby burrito joint Bubby’s, buy some Mexican apple soda and cadge a phone off the hipster behind the counter, and tell Brian that I’ll be reading in the park and could he please fetch me when he gets home. Of course, I’d just finished the book I was reading on the subway ride home, so it’s more like “sit on my ass and stare at random passersby until they get the heebie-jeebies” in the park.*

By the time I got home late and started flipping through cookbooks, cranky and vertiginous, it was almost 7, and there was no way in hell there would be dinner, cupcakes AND posting in the same night. So I thought: who says I can’t smack down some cupcakes? Do I or do I not make the damn rules around here? I’m pretty sure I do, although I have had my doubts.

*To all the parents whose kids were playing on the lawn where I was sitting: I am not planning to steal any of your babies.

Fairly useless photo of flour. Unsifted, because I am a REBEL.*

I haven’t used Demolition Desserts since I bought it because the majority of the book is dedicated to multi-part, fairly involved plated desserts; not something I do on a regular basis. Plus, I go back and forth on her whole “I’m a hard-ass rebel butch pastry innovator and also did I mention that I am a hard-ass rebel;” it can get a little unintentionally precious. But there’s no denying that the book is full of interesting concepts and fascinating flavor pairings, and the short section on cupcakes is no exception.

So: Cupcakes first, because they’d need to cool completely before they could be filled and frosted.

I’m a very messy cook, I’m the first the admit it. I’m an even messier baker – all the ingredients are either powdery and flyaway or sticky, what am I supposed to do? And when I’m dizzy – good god, we should have laid down a tarp and rented a ShopVac. This cup of flour was the very first thing I measured, and by the time it got into the bowl there was flour all over the counter, the floor and my ass. 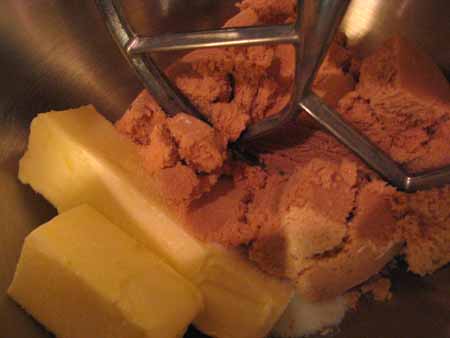 The start of something beautiful.

I guess I should be glad the dizziness is pretty minor. I once had vertigo for 6 months following a car accident, and would routinely walk into walls when trying to turn corners or fall up stairs. Yes, up. One night, after I’d gone for a run at the local high school track, I was doing some crunches on the bleachers and I rolled RIGHT OFF THE BLEACHER and fell to the ground, mid-crunch, narrowly averting dashing my skull to bits on the tarmac. Which is why I now eschew all forms of physical activity.

Anyway, the cupcake recipe itself was pretty straightforward, excepting a very high percentage of brown to white sugar. Butter and sugar were creamed. Eggs and vanilla were added. Flour and milk were beaten in, alternating with one another. Egg white was somehow smeared down the side of the mixing bowl and all over the base of the standing mixer despite the fact that the eggs were cracked directly into the mixing bowl itself. 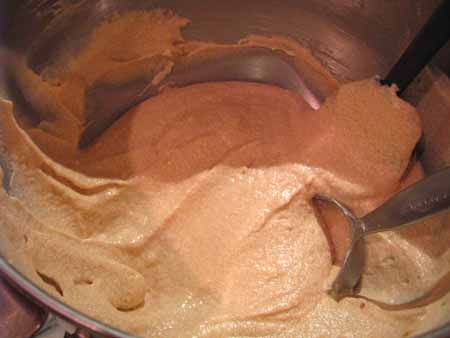 All the brown sugar produced a smooth but slightly grainy batter, which I portioned into muffin tins.

Did you know that muffin tins come in difference sizes? Can you tell me if there’s a reason other than to irritate the holy hell out of me? I didn’t notice until I’d gotten home from the store and was sticking the paper liners I’d bought into the muffin tin that there was a fucking CHART on the package explaining WHICH MODEL TINS the liners would fit. There are different sizes? My muffin tin has a MODEL NUMBER? The fuck? I DEMAND MUFFIN HOMOGENEITY. I plan on forming a new special interest group around this issue.

Maybe this seems a little out of proportion to you, but WHY THE HELL WOULD THEY DO THAT? Muffin liners are muffin liners, for the love of pete.

This issue has officially lodged itself in my craw. 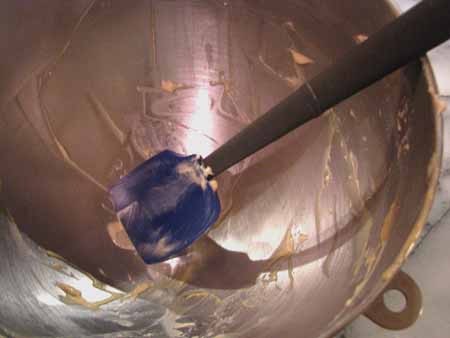 One is the loneliest number.

I meant to take a picture of the filled muffin cups and the unsightly crimps and creases resulting from the slightly-oversized paper liners, but I was too busy scraping the mixing bowl clean and eating the excess batter.

They went into the oven for about half an hour, giving me time to make the caramel and start on the frosting.

Even though I’ve never had any kind of burnt-sugar mishap, I still get a little nervous any time I have to pull out the ol’ candy thermometer. I’d run out of light corn syrup and subbed in dark; other than that things went smoothly. Heat sugar, water, corn syrup and a bit of lemon juice to a boil, let go to 350 degrees (this gives you a caramel on the lighter, sweeter side, almost butterscotch-y; I’d have preferred if it’d headed more into burny territory since this cupcake was so sweet). Add a pat of butter and a cup of cream, stand back while the demons are exorcised and their angry hisses die down – seriously, that shit will SPIT – and stir ’til smooth. A splash of vanilla and some kosher salt went in at the end. 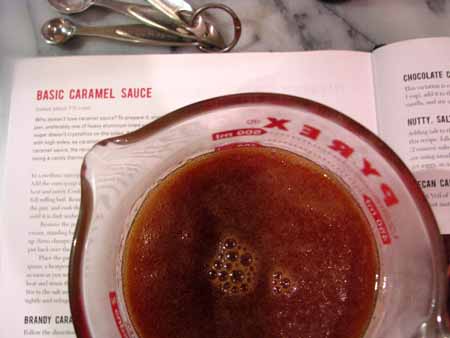 The finished caramel sauce was really thin while molten, but firmed up nicely over time into a viscous sauce.

Nothing bad can come of these ingredients.

The frosting is a recipe for coronary armageddon, and it’s a thing of beauty. It starts with a simple enough ganache – equal parts chocolate and heavy cream – made with both milk and semisweet chocolates. Peanut butter is whisked into the warm ganache.

If you were a normal person you might stop here, let the ganache firm up enough to spread and use that to frost the cuppycakes. But Elizabeth Falkner is not a normal person: she is extreme and over the top and crazy and maybe trying a little too hard but what can you do. So she doesn’t stop here. 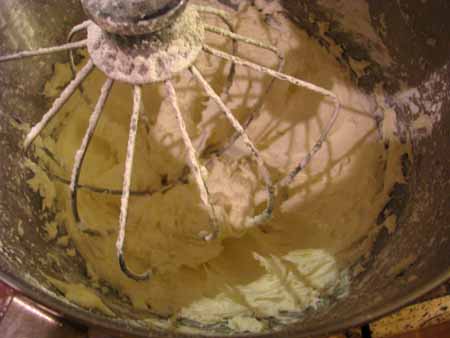 Do you want our race to die? Because it seems like you do.

She makes a simple buttercream frosting, the butter + confectioners’ sugar kind (which, if I’m being honest: I hate). Her sugar-to-butter ratio is mucho high because she is WILD AND CRAZY. 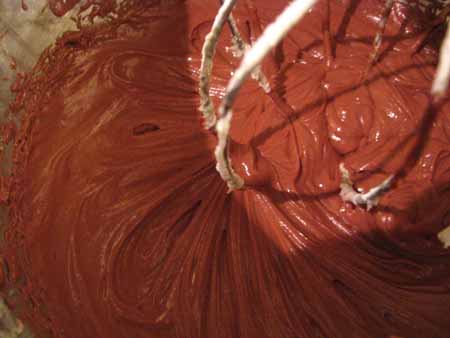 HOLY VIRGIN MARY RIDING HER DONKEY THROUGH THE DESSERT.

And then she beats the chocolate-peanut butter ganache into the buttercream, and that’s your finished frosting.

The cupcakes had cooled down in the pan and were ready to be popped out, filled and frosted.

Do you see all those crinkles in the cupcakes? Fucking cupcake liners. If the cupcakes fall apart when people try to eat them tomorrow, I am writing someone a strongly worded letter.*

*To whom in may concern: 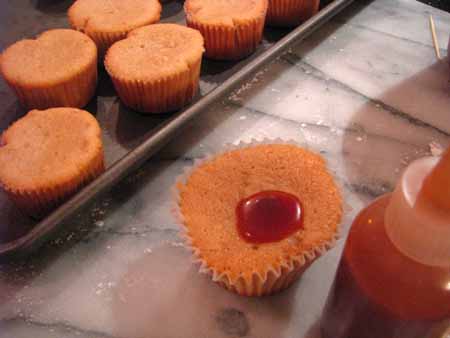 The filling station. As of this writing, caramel sauce had topped $100/barrel.

I’m bringing the cupcakes unfrosted and will assemble them at the office, because there is no way I’m hauling a box full of caramel-filled, peanut butter-frosted, artfully peanut-and salt-topped cupcakes on the subway at 8:30 on a weekday morning. I had to put a couple test cases together, though – you can’t serve untested, unphotographed cupcakes.

I poured the now-thickened caramel sauce into a little squeeze bottle, stuck it into the center of the cupcake and filled. At least, I tried to fill. Elizabeth told me to “squeeze until the top of the cupcake starts to bulge;” I think I may have stuck the nozzle in a bit to far, because my top stayed flat as a pancake, but my bottom started to develop a noticeable love handle. But I figured that when you’re filling something full of liquid crack caramel, no one really cares if you’ve done it 100% correctly.

I covered the top with a thick layer of peanut butter frosting, added some honey-roasted peanuts and sprinkled gray salt on top. 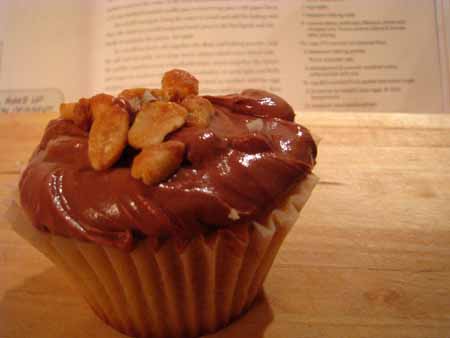 First off, this is one damn good looking cupcake. I just slopped that shit on there, and it still came out looking almost identical to the picture in the book. Sex-ay.

Second, this cupcake makes a ginormous mess when you eat it. Tacky, sugary substances go everywhere. But you know what? It’s fun, and also kind of sexy, so score a point there too.

Taste-wise, this would be over-the-top sweet were it not for prodigious amounts of salt, the way fleur de sel makes caramels so wonderful. Not that this surprises me, as I did select a recipe named “Candy Bar Cupcake.” It also helps that all the flavors really stand out as opposed to all reading as generically sweet: The cake really tastes of brown sugar. The peanut butter stands out in the ganache. The salty caramel does a good job of cutting through.

Of course, they also took about 3 hours to make, start to finish, which isn’t terrible but is still a bit more than I normally like to spend on cupcakes, which are, by definition, tiny cakes and to my mind should thus take less time than cake.

0 thoughts on “Thursday Night Smackdown: Girlfriend in a (sugar) coma”