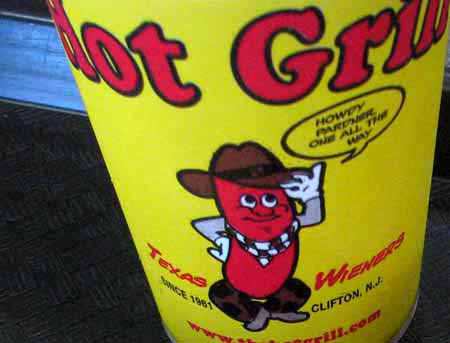 This anthropomorphic hot dog is wearing chaps and asking for “one all the way.” Just be glad I didn’t take pictures of the BDSM-themed cups.

Brother-in-law Randy, the third member of an august judging panel that also included (1) me and (2) Brian, getting massively fucked up on weiners. We thought he would be the perfect candidate, what with his duodenal ulcer and fear of eating out.

Texas Weiners: the pride of North Jersey, at least those denizens of North Jersey that are (1) construction workers, (2) truck drivers, (3) hungover or (4) any combination of 1, 2 and 3. Invented, inexplicably, in Paterson, NJ, a Texas Weiner* is a deep-fried hot dog (generally beef) with spicy brown mustard, raw onion, and a chili-esque, tomato-based beef sauce with hints of cinnamon and allspice.

Texas Weiners are taken very seriously in North Jersey. There are many weiner joints, all with their own vociferous supporters. In the name of science, we set out to canvas the top spots to root out North Jersey’s Hottest Texas Weiner.** Our list of contenders, compiled after countless minutes of in-depth internet research:

Logbook in hand, we started at the northernmost joint and worked our way down. Unfortunately, even with our carefully planned moderate eating schedule, we only made it through the first four before succumbing to the meat sweats, hence “part the first,” with “part the second” coming when our kidneys have sufficiently recovered.

*In case you can’t get enough milage out of the word “weiner” alone, some places call them “Hot Texas Weiners.”

**Yes, yes, you have the hottest weiner, I know. You are SO VERY FUNNY. 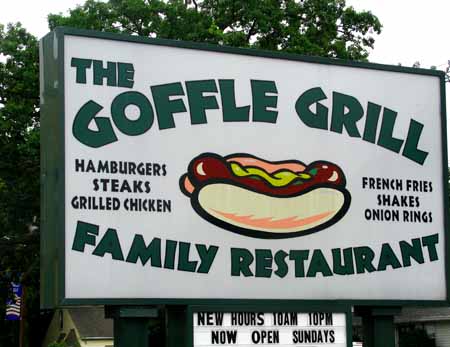 Our first stop was the Goffle Grill, which I’d never heard of but which several internet bulletin boards filled with people who are REALLY, REALLY INTO HOT DOGS told me was worth a stop. I was sad to see that the old drive-in section of the parking lot was no longer in use; the only thing better than a good Texas weiner is not having to drag your fat ass out of the car to get it.

Inside, we placed our standard order for the day: 1 plain hot dog (to judge the quality of the naked dog), 1 Texas Weiner all the way, a birch beer (traditional beverage accompaniment to the Texas Weiner) and an order of onion rings (because onion rings are good). 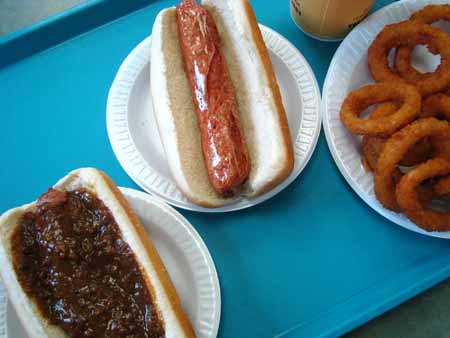 Behold, in the center of the naked dog: Friday’s Frig? Congrats to Tracy and her pretty close guess of “Cooked pork sausage, skin split”.

Sadly, the Goffle Grill did not get the day off to an auspicious start. Although the naked dog looked good, it tasted only okay, rating an exceedingly average average of 5/10, and scored dismally in the “casing” category because of its total lack of snap, where it trudged in with a pathetic 3.75/10. How do you make a deep-fried hot dog flaccid? It’s a mystery to me. The onion rings, while not scored, also got a thumbs down for being pre-made extruded rings and not actual whole onions.

The Texas Weiner perked all three of us up, however.* Spicier mustard would have been nice, but there was a good jolt of sharp, raw onion (the only place we visited, in my opinion, with enough raw onion diced large enough to be really punchy) and the meat sauce was nicely flavored with pepper and clove notes. In both texture and taste the meat sauce scored 7s and 8s. Sadly, none of us could get over the sad, sad sausage casing and the Goffle garnered an overall 6.125/10. 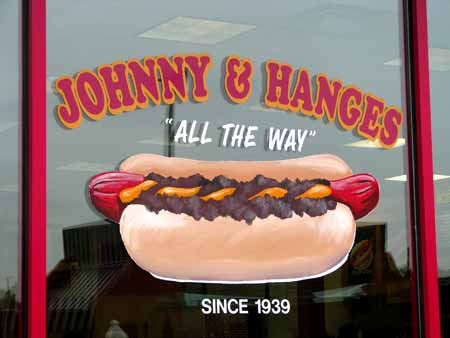 Johnny’s been bringing you all the way since 1939. I’M TALKING ABOUT HOT DOGS, YOU FILTHY PEOPLE.

Johnny & Hanges, only a five-minute drive from the Goffle Grill was another bulletin-board find. My immediate and lasting impression: it’s clean. Very clean. And shiny. And in my book? A Texas Weiner joint should NOT be clean and shiny; it should be a little grimy looking and your table should be a little sticky. Other oddities: You can get freshly-filled cannoli there, which can’t be right. And the men’s room has two sinks and one toilet, while the women’s room has two toilets and one sink. Clearly, something is afoot. 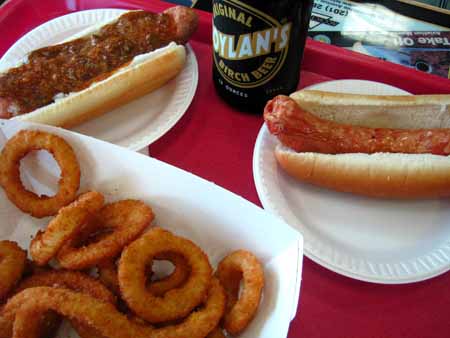 See how shiny the table is?

Johnny’s plain dog beat out the Goffle by a hair, sneaking ahead with a 5.7/10, and its casing and bite put the Goffle to shame with a full 6 out of 10. Bonus points were also earned for the Boylan’s, as well as for onion rings that, while still a little industrial in their heavy breading, were made of actual whole onion slices.

Unfortunately, we still couldn’t catch a break: Johnny’s meat sauce, the heart of a Texas Weiner, slunk in with a pathetic 4.3/10. The onions were so finely minced so as to be unidentifiable, and the mustard appeared to be of the “plain yellow” variety; unacceptable in this context. Overall, just shy of 6/10 (it would have averaged out to an even 6, but I gave it a 5 because it was JUST SO FREAKING CLEAN).

Obviously, not everyone feels like we did; just after we sat down to eat, the lunch rush materialized and there was a line out the door. To those people I say: Be ye not so provincial about your hot dogs! So what if you’ve been coming to Johnny’s since your great-great-grandpa Barney got that job down the saw mill and took his family out for the only celebration dinner he could afford? Yes, yes, very touching. But thanks to the magic of cars and New Jersey’s state of the art, omnipresent highways, a better dog is mere minutes away. 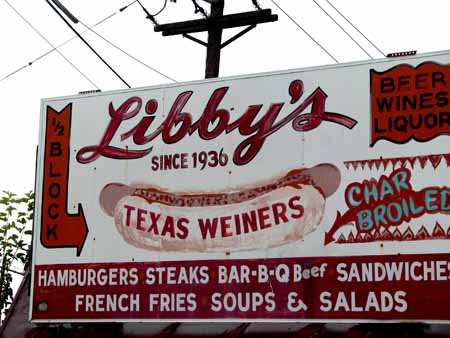 I’m a little in love with this sign, and I’m not sure why. I think it’s the jaunty little off-kilter “beef”.

After Johnny’s, we were excited that things would start to look up with the next two joints on the line-up, both widely known as Texas Weiner meccas.

The first, Libby’s Lunch, is actually located in Paterson, birthplace of the Texas Weiner. It’s a nondescript white box on the side of a nondescript road overlooking a nondescript body of water with some listless ducks. When we drove up, I exclaimed, “Now this is what I want: a little box where I go in and someone gives me a hot dog.” Which Brian thought sounded a lot like a description of prison, to which I say SO WHAT if they have delicious hot dogs. 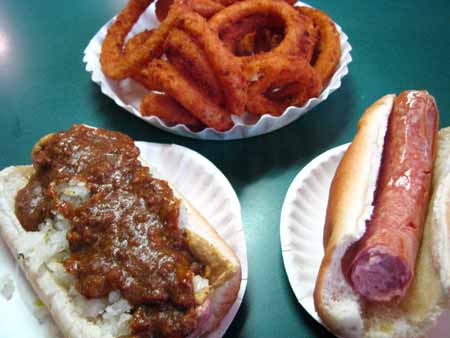 I knew I was supposed to take a photo first, but I couldn’t stop myself from taking a bite of this weiner.*

Libby’s started the serious upswing that would carry us through the rest of the day. The dog was tasty. The dog had snap and bite – 7.33/10, unprecedented! The meat sauce earned consistent 8s across the board for taste and texture – it was the day’s favorite for 2 out of the 3 of us – and the all-the-way dog was nicely loaded with onions and spicy mustard.

Libby’s also garnered universal acclaim for its nondescriptness, the very je-ne-sais-quoi that Johnny’s so sadly lacked, and for its extremely half-assed attempt at “décor.” Dear owners: I particularly love the enormous concrete rabbit sculpture next to the potted plant on the counter. Magnifique. 8/10 overall.

*SHUT UP. You people DISGUST ME. 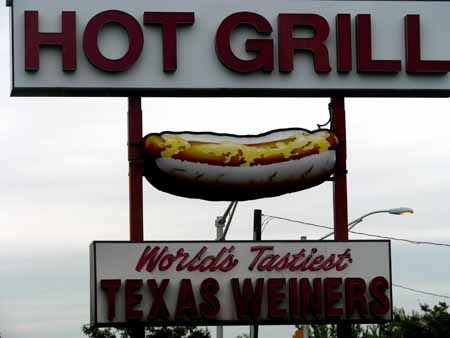 Our final stop of the day was the Hot Grill: a true Texas Weiner institution. Located in Clifton, NJ, it is in a constant state of warfare with other Clifton favorite Rutt’s Hut for Best Hot Dog Ever. Rutt’s wasn’t on our agenda since they don’t do a true Texas Weiner, so I recuse myself from that argument. 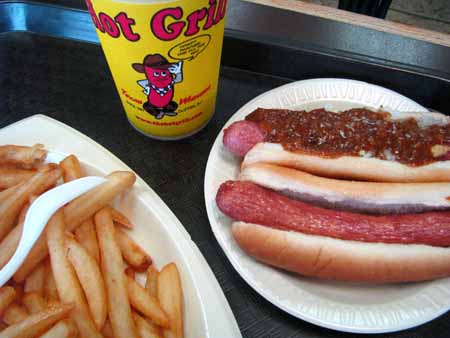 The Hot Grill scored through the roof in every category there was, and in some categories that haven’t been invented yet. The dog itself was chewy and spicy and delicious and got 9s – 9s!! – for taste. The meat sauce got 8s and 9s as well, and was my favorite of the day, and the all-the-way dog was nicely loaded with spicy brown mustard and onion, all in balance. So besotted were we of the Hot Grill that we were totally willing to overlook the complete lack of onion rings (one area in which Rutt’s Hut, which has amazing homemade onion strings, has them beat hands down) and the fact that the only available root beer was Mug.

As noted, this was, unfortunately, where the meat sweats brought us down. But don’t worry, Manny’s, J&G and Texas Weiner I, we’re a’ comin’ for you.

Okay, fine, now you can make ONE weiner joke.  ONE.  So make it a good one.

23 thoughts on “The Texas Weiner Tour of Aught-Eight, Part the First”