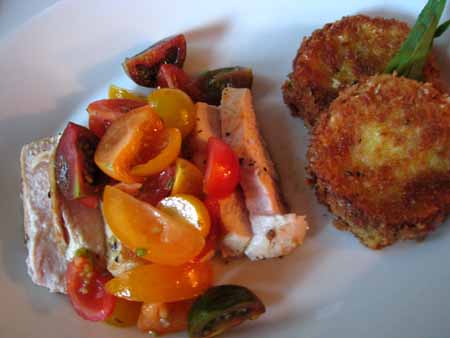 It warmed my heart to see all you Aqua Teen fans. It’s too bad the Wolfen is going to come for you with his razor.

Instead, I bring you deconstructed chicken parm: pan-seared chicken breasts, tomatoes with lime and cumin seed, and pan-fried smoked mozzarella. Or as I like to call it, Heidigger’s Chicken. It’s like Schrödinger’s cat, but instead of a possibly dead cat locked in a box, there’s fried cheese.

Half a ball of smoked mozzarella: $1.74. One egg: $0.25. Breadcrumbs, grating cheese and black pepper: Pantry staples.

Aside from being a staple at chain restaurants, diners and bars across the country, fried mozzarella is also a traditional Southern Italian dish, served variously as a first course, side dish or light meal. It’s also a totally different creature than TGI Schmiday’s Deep Fried Jack Daniels Happy Fun Cheese Sticks, for which I’m pretty sure they should be paying slander reparations to my people. Pan-fried fresh mozzarella is delicate, milky and the slightest bit oozy, with a simple thin crust of egg and breadcrumbs

I grabbed some smoked mozzarella for this dish, hoping that (1) the firmer mozzarella produced by smoking would hold up a little better during my first cheese-frying adventure and (2) the smoky flavor would be an interesting twist that would partner well with the cumin and lime-dressed tomatoes. Also because I get disoriented and panicky when faced with a large speciality cheese case under time pressure. 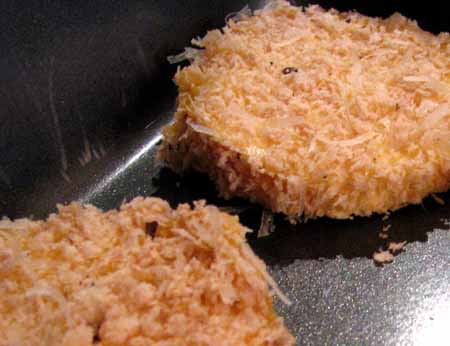 According to Schrödinger, once you close the pantry door the breadcrumbs are both fresh and stale simultaneously. SPOOKY.

I cut quarter-inch thick slices of cheese, dipped them in a beaten egg and dredged them in panko breadcrumbs enriched with a little grated parmigiano and freshly ground black pepper. I know, I know, cheese covered in cheese; but I wanted to sneak the “parm” part of Chicken Parm into the dish. And can you ever really have too much cheese? Not a rhetorical question. I’ll give you 2 guesses, but I bet you only need 1.*

The cheese patties went into the freezer for a few minutes to firm up while I threw the tomato salad together and got the chicken started.

*If you need both, we have a situation here. 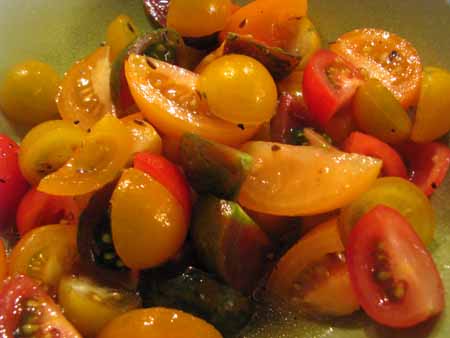 I’d found a container of fun heirloom cherry tomatoes – my favorites are the green and purple ones that look like wee little watermelons, and I fully admit to opening two containers in the produce section and swapping some plain ol’ red tomatoes for some extra tiny watermelons. I don’t know if I actually like the taste better – I actually think the tiny yellow ones are my favorites – but they’re just so damn cute. Sorry, person who I shortchanged on the fun tomatoes.*

The tomatoes were quartered or halved, depending on size, and tossed with the juice of a lime, a splish of olive oil, fresh black pepper, sea salt and toasted cumin seed.

You’ll notice that you haven’t yet seen any actual pictures of chicken. That’s because all I did was salt and pepper a chicken breast and sear it in a cast-iron skillet. The end. I thought about taking a picture, but, you know, chicken breast. In a pan.

*I’m not actually that sorry. Only a little.

Husserl would have loved these, I just know it.

While the chicken finished cooking through, I retrieved the breaded cheese and heated a thin layer of olive oil in a skillet (had it still been good I would have used the leftover garlic confit oil for added deliciousness, but there’s that whole botulism thing). The cheese only needed one minute per side to brown and soften beautifully; as I’d hoped, the firmer smoked mozzarella held its shape perfectly during frying.

I only made these four rounds of it, because I knew it would be dangerous to have extra laying around. I’m pretty sure the taco rule has been legally found to apply to fried cheese. 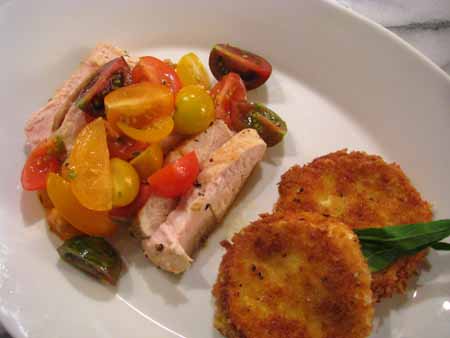 I sliced and divided the chicken breast, spooned the fresh tomatoes and a bit of their dressing over the top and laid a few rounds of mozzarella alongside.

So about this dinner: Yum. Did it taste like traditional chicken parm? Not at all. Is that a bad thing? Not at all. The chicken was juicy and perfectly cooked. The tomatoes were nicely balanced between acid and sweet with jaunty pops of grey salt and cumin setting off their flavor. The coating of the cheese added more welcome crunch, and the cheese itself was just melty enough and deeply smoky.

Who says philosophy is a useless pursuit? Well, my mom did when I told her all the loans were paying for a B.A. in philosophy instead of a computer science degree, but that’s probably because she never had this dish.

Deconstructed Chicken Parm
How can I give you a recipe for a deconstructed dish? It’s illogical. Anyway, there’s nothing to add other than what’s been described above.

16 thoughts on “Cheap Ass Monday: Going All Derrida On Your Behind”