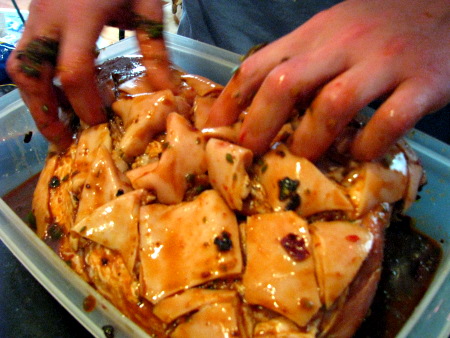 Here’s a man who really knows how to massage his meat.

A barbecue in North Carolina isn’t really a barbecue unless some part of a pig is being cooked, and the Horse and Pony Jamboree did not disappoint.  Dodge (actual first name), the better other half of the HPJ, created an intensely flavorful pork shoulder, jazzing up a traditional Carolina vinegar-based marinade and mop with fresh and dried anaheim and poblano chiles.  He’d also planned some spicy pan-fried black bean cakes and some kind of amuse bouche that involved lemongrass-flavored shrimp wrapped in dough and fried.  I was skeptical, but as I generally approve of food on sticks, particularly when fried, I kept an open mind.

Unfortunately, he failed to actually cook the pork shoulder, and had to be bailed out by some non-Southern, non-professional chefs.  Also the beans were abandoned by the side of the road halfway through.  And the shrimp…well, you’ll see.  But hey, A for effort!

Gather ’round, children, while I spin a cautionary tale of culinary hubris. 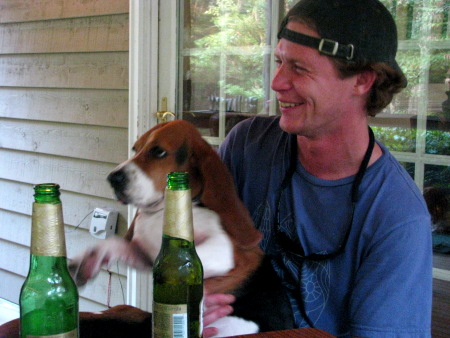 I thought long and hard before posting this photo of Edie caught in a sinful embrace with Dodge, because I know she has political ambitions and I don’t want to compromise her.  Theirs is a love that should not be named.

Here is Dodge.  Dodge J. Draffin.  Remember everything I said about Graham?  Dodge is pretty much the opposite of those things, love of beer and “yo mamma” insults aside.  Laid back and lanky, he’s an itinerant chef who’s worked all over the country, constantly looking for a restaurant and colleagues who will help him push his boundaries.  Dodge has BIG IDEAS.

While the boundaries are sometimes ill-defined – I think back here to a Sour Skittles gastrique of which I’ve heard tell, perhaps not one of his finer moments – his enthusiasm, creativity and sheer love of food can’t be faulted.  He’s currently working in the kitchen of The Left Bank at the Sanderling, the resort’s fine-dining restaurant, where he manages to churn out delicious food night after night despite being saddled with my punk-ass 22-year-old nephew* for a kitchen helper.

He also comes with an adorable Basset Hound named Edie who will roll over and play dead (well, except for the wagging tail) if you point a finger-gun at her and say “Bang!”  So, like, ten thousand bonus points for that.

*Ryan, I know you are reading this. You really need a haircut.  You look like a hoodlum.

Dodge isn’t much of a planner, so we weren’t sure what we’d be in for.  Apparently, this fine specimen is what caught his eye while grocery shopping, so pulled pork it was.

I don’t know if you know this, but properly smoking a pork shoulder is done low and slow, and takes a minimum of 5 and potentially upward of 10 or 11 hours to cook one to the right degree of doneness and tenderness.  Which is maybe something to consider if you’re starting to cook at 2pm and are supposed to be providing dinner the same night.  Maybe.

He scored the skin and fat cap and poured his vinegar-chile sauce over, making sure to get it in every nook and cranny.  I’d like to give you more detail about the sauce, but I don’t have any and I’m pretty sure Dodge doesn’t either; he’s already moved on to the next 17 things he’ll be starting and not finishing.*  (You can find some trusty recipes for pulled pork in the “barbecue” category.) 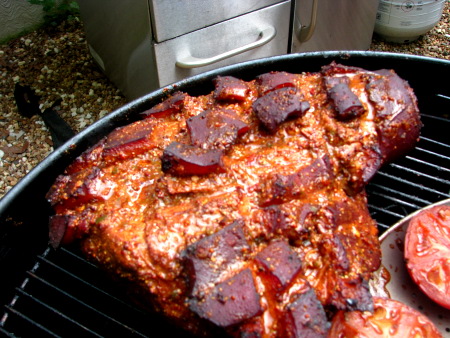 You can’t say anything bad about this. Well, other than the shitty photography.  Shut up.

Dodge and Ryan tossed the pork on a charcoal grill supplemented with some soaked wood chips.  Dodge added some tomatoes studded with garlic cloves, which would eventually turn into a coulis for the shrimpsicles.

Since he had hours to kill while the pork smoked and he rarely remembered to check on it, Dodge had a lot of time on his hands to turn to his other dishes. 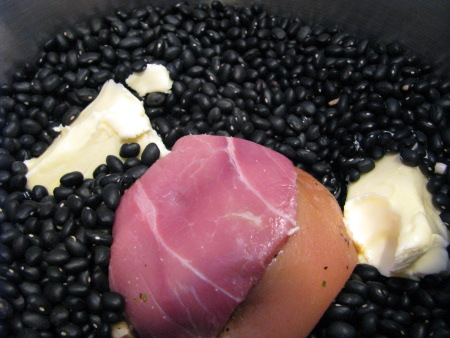 The beans started with bags of black beans, entire sticks of butter and a ham hock in a big pot, so you know I was all over that shit like white on rice.  Also Dodge stuck his whole hand into the pot to make sure the hock was coming in contact with the hot metal and swirled it around, and I enjoyed the element of danger this added.

I believe that at some point he added some chopped onion, sriracha (these Sanderling boys love their sriracha) and god knows what else, and left the pot on the stove for the rest of the day.

Since this dish also sat and cooked while Dodge ignored it completely, he was free to turn to his third attempted dish of the day, the shrimpsicles.  On one hand, I must applaud him for executing his vision to completion and producing actual, edible foodstuffs that were ready to eat before 4am.  On the other hand, the shrimpsicles were somewhat…let’s say “unfortunate.”

Hordes of Southern grandmas are ROLLING in their graves.

The concept behind the shrimpsicle was lemongrass and citrus marinated shrimp wrapped in wonton wrappers and deep-fried, with the smoked tomato coulis as a dipping sauce.  Unfortunately, the local Harris Teeter (BEST NAME FOR A GROCERY STORE EVER) keeps their wonton wrappers with the organic produce, and Graham’s competitive nature did not allow him to reveal this to Dodge.  Harris Teeter also failed to stock phyllo or puff pastry, forcing Dodge to buy pre-made pie crust.

Seems like a natural progression to me.  Phyllo and puff pastry can be hard to find, especially here in the backward Southland and pie dough is SO HARD to make from scratch, what with the four ingredients and the 30 seconds of mixing and kneading.  What choice did the poor boy have?  WHAT DO YOU PEOPLE WANT FROM HIM, BLOOD?  MY GOD.

The shrimp spent a minute on the grill before being introduced ass-first to the pointy end of some jumbo skewers and being mashed unceremoniously into bits of pie crust.

The “squelch” noise produced as Dodge squeezed the dough onto the shrimp with his whole fist – why gently wrap, when you can maul? – really helped pump up our anticipation.  And then off they went into the oven for 15 minutes, the deep-frying idea having been abandoned en route following Dodge’s failure to fill a pot with oil and heat it.

Look, he was BUSY.  I mean, he had to ignore the pork AND the beans, AND there was a lot of beer to drink, AND he had to constantly come up with zingers mocking his alleged “friend”, the non-fine-dining chef Graham.  It took a lot of effort. 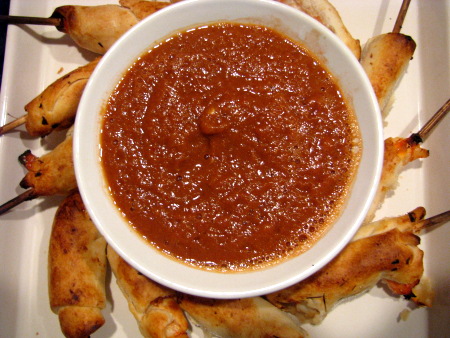 Pigs in blankets, where art thou?

The smoked tomatoes, meanwhile had been retrieved from the grill.  Two hours spent side by side with the pork had given them an incredibly deep smoky flavor with hints of porcine goodness.  They went into a blender with – wait for it – sriracha and some salt, and then were strained into a bowl to await their companions.

The shrimpsicles were a little problematic from the get-go.  They themselves may have been aware of this, their failure to release cleanly from the baking sheet perhaps their way of saying, “Consider not eating me!”  The marinade was overwhelmed by the sheer doughiness of the pie dough, and the double-whammy grill and oven may have been a bit much for the shrimp, which I don’t think are supposed to be quite that chewy.

Luckily, there was still the pork and beans to look forward to, at some future point.  Again, naturally – any of you would have done the same thing, I’m sure – Dodge decided to go home.  The pot of beans went into the fridge, and he instructed us to pull the pork off the grill and stick it in the oven in the low 100’s for a few hours to finish off, even though pulled pork is usually brought up to around 180 or 190 degrees.  The lowest the oven would go was 150, so he set it and left.

I’m not sure if he was drunker than he seemed or if Georgians have a particular way of making barbecue that includes holding it for several hours at sub-done temperatures and encouraging the breeding of multiple bacterial civilizations that rise and fall, but it seemed a little odd. 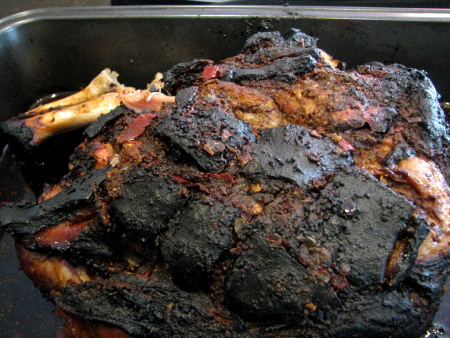 Come to me now.

Luckily, there were some yankees in the house who have smoked a butt or two in their time, and between us all we decided to crank the oven to 225 and let the pork ride for 3-4 more hours, until the bone pulled right out of the meat and the muscle groups just fell apart in our hands.

We let it sit out, wrapped tightly in foil, until the next morning; it was still warm when Brian and Ryan unwrapped it to pull it.  The meat was warm, tender, and permeated throughout with a good amount of smoke flavor and a gentle zingy heat from the vinegar and chile.  Ryan threw the bones and trimmings into a pot with some more vinegar, sugar and, yes, sriracha, and cooked that down into an intensely spicy barbecue sauce that went perfectly with the pork.

Sriracha people, are you paying them?  What gives?  Don’t get me wrong, I enjoy your product, but do you have all Northeastern Carolina chefs in your back pocket? 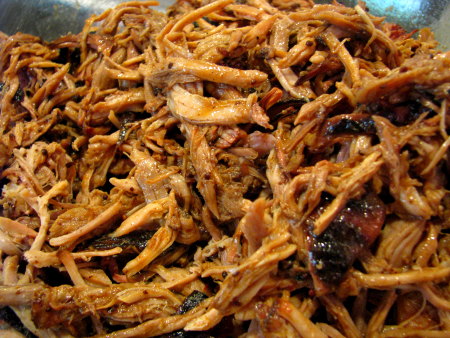 Despite your best efforts, you have answered correctly! Let’s take a look at your wager.

The finished product was seriously good, and ranks up there with some of the best pulled pork I’ve ever had; I’m going to try my damnedest to get a better sense of what went into the marinade, because that was the foundation for both the flavor of the pork and the sauce, and it was wonderful – classic Carolina vinegar-based, smoky barbecue brought to a new level.  And when Dodge eventually showed up to taste it two days later, he was pretty pleased as well.

The black beans never did get pureed, chilled, cut into rounds and grilled, but I have no doubt that if they had been, they would have been delicious as well.  The shrimp, well, not every experiment works out, you know?  God knows I’ve had my share of utter failure that makes these shrimp look like lobster with drawn butter, and that’s working from an actual recipe.  But the idea was an interesting one, even if all the products weren’t in place and the result wasn’t what he’s hoped.

Because here’s the thing: to be great, a kitchen doesn’t just need competent line cooks who can execute a dish perfectly.  It needs idea people to push the envelope, play with flavors and come up with the Next Big Thing, and the pursuit of those ideas necessarily involves failure.  But without the idea people, restaurants would be nothing – just the same old piled on top of more of the same old, with a side of same old.  Dodge is an Idea Person with a capital IP, and any restaurant kitchen is going to benefit from his complete joy at smashing two unlikely ingredients together and seeing what happens.  And so are we.

You might want to keep your take-out menus handy, though. I’m just saying.

15 thoughts on “The Dodge & Graham Horse and Pony Jamboree: Part 2”