I would have invited you over for dinner, but I couldn’t find your phone number anywhere, I SWEAR.

You see, I always thought I didn’t like tomatoes. Tomato sauce, sure (as long as there are no visible tomato chunks), tomato soup, okay, tomato ketchup, acceptable. But a whole, raw tomato? No, thank you, I’ll pass.

You can imagine how much this endeared me to my mother and nonna and zias.

As it turns out, I DO like tomatoes. A lot. What I DON’T like are the mealy, soulless, pale pink simulacra of tomatoes generally available in the standard American supermarket.

I’m like the fucking jolly green giant and Mother Nature all rolled into one.

These tomatoes and herbs grew merrily in my garden with minimal assistance from me. I didn’t stake them, didn’t cage them when they flopped, let invasive vines clamber over them and spent most of their young lives trying not to be insane. Frankly, I only planted them because that’s what you’re supposed to do in a New Jersey backyard; I didn’t really plan ahead for dealing with the actual fruits themselves, I think I assumed that I’d kill the plants before they ever got to the fruiting stage. And yet, such was their tenacity they grew despite my utter neglect, dozens and dozens of them grew. And more dozens. An overwhelming number of tomatoes for someone who doesn’t like tomatoes married to someone else who doesn’t like tomatoes. It brings a tear to my jaundiced eye.

Along with the backyard bounty, we’re members of a CSA. Which means: MORE TOMATOES.

It was time to confront the tomatoes head on.* We would learn to like them or die give up and order Chinese take-out trying. So I planned an entire dinner showcasing the tomato: classic caprese salad, a basic panzanella, and tomato and goat cheese tartlets.

*Tomatoes! Apply directly to the forehead.**

A rare glimpse at the often-invoked “hot buttered ass.”

I mean, come on. It looks like a little heiny, doesn’t it?

Before dealing with the tomatoes, I had to deal with the mozzarella. I had a hunk of fresh mozzarella leftover from the last batch of grilled pizza, but because of a massive brain fart had neglected to store it in liquid.

Luckily, Serious Eats informed me that it is possible to revive rubbery, refrigerated mozzarella by gently poaching the cold cheese in warm, whole milk. It’s still not the same as fresh, but it definitely re-hydrates and reinvigorates tired cheese and helps to play up its milky sweetness. The only caveat: flip the mozzarella periodically so the side touching the warm pot doesn’t start to melt and spread.

Am I really going to be able to eat this? In the words of New Jersey bard Jon Bon Jovi, I’m livin’ on a prayer.

While the cheese visited the spa, I threw the panzanella together so it would have time to sit and meld and the bread to soften. For those who don’t know, panzanella is a traditional Tuscan peasant dish created to use up day(s)-old bread. At its most basic, cubes of bread are tossed with fresh tomato, herbs, olive oil and red wine vinegar; common additions include onion and olives.

Since I hadn’t really planned ahead I didn’t have any day-old bread on hand, but I figured shitty Pathmark “Italian” bread briefly dried out in the oven would approximate it. Some recipes call for soaking the bread in water or toasting it in the oven, but I don’t like the texture either of those methods produce – I wanted the bread to retain some chew (so soaking was out) but not crunch (ditto toasting) (I get a little Goldilocks about shit like this).

Otherwise, I kept my salad super simple: bread, tomatoes, basil, red onion, freshly ground pepper, sea salt, olive oil and vinegar. I mixed everything together and set the bowl aside, tossing it every 5 minutes or whenever I remembered.

We’ll all live happily ever after on the big goat cheese mountain.

Okay, I could lie to you about this next part, but I have too much respect for you. The basic idea of the tarts – tomato, cheese, puff pastry – came from Paula Deen. And I don’t mean my neighbor who happens to be named Paula Deen and is a really good cook, I mean the actual Paula Deen, the one sculpted from an enormous slab of cream cheese who has that show on the food network where she forces c-list celebrities to deep-fry lasagna to try and bolster their popularity among the “thinks Hungry Man dinners are a special treat” demographic.

I don’t remember what kind of cheese she uses, most likely Velveeta Brand Cheese-Like Food Product, but I decided to go with herbed goat cheese. Since my herb garden is also pretty prolific, I bought a small log of fresh, young goat cheese and mixed in fresh chives, thyme and black pepper.

I am a winner by association!

Do you have this in your freezer? You should. It’s the only puff pastry explicitly endorsed by Details magazine!

Seriously, Dufour puff pastry is no joke. Awesome quick tarts, easy pot pie topping, buttery and perfect – I’m pretty sure you could wrap a car tire in this stuff and bake it off, and I would eat it. And probably ask for seconds. They are not paying me to say any of this, although if anyone from Dufour is reading this and would like to pay me, I would be happy to continue extolling the virtues of your award-winning, stunningly flaky puff pastry.

Tried a piece of the tomato-y bread…slowly warming to the idea.

Remembered to toss the panzanella.

This one HAS to be good.

I trimmed the puff pastry into rectangle and layered each sheet with slices of ruby-red, juicy plum tomato. I sprinkled dabs of the goat cheese and some smoked grey salt over the top, added a wee drizzle of olive oil and popped them into the oven. The pastry trimmings went in as well; treats for the cook, dontcha know.

My oven has a convection setting that I almost never use because I’m not quite sure exactly what it does or what temperature adjustments I should make when using it, and I’m highly risk-averse. Since I was already throwing caution to the wind with this tomato-fest, I decided to live in the fast lane and flipped it on* hoping it would help cope with any liquid given off by the tomatoes and leave me with a crisp tart with deep tomato flavor.

*Seriously, this is what passes for exciting around here.

At the very least, pork – in the form of sweet sopressata – will save the day.

The tarts baked, the panzanella sat, and I sliced up my reanimated cheese and some colorful CSA tomatoes and threw together the caprese with some backyard basil. 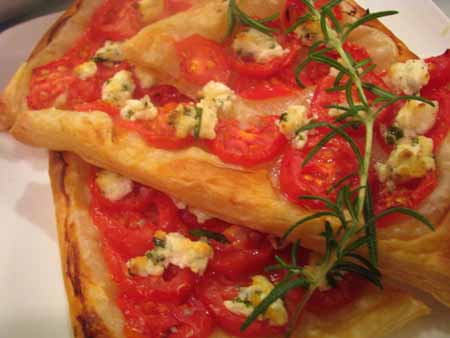 The tarts started to smell really fricking good. True, some of this was due to the puff pastry, which can’t not smell good. But an amazingly sweet, heady tomato smell was wafting out as well.

I gave them a few more minutes under the broiler to get some golden color on the cheese and give the tomatoes one last blast of high heat, and dinner was served. I made myself a plate that, while perhaps of questionable tastiness was at least visually gorgeous, representative of everything that’s good about summer excepting watermelon and Choco Tacos.

I WILL NEVER DOUBT AGAIN. But you still can’t make me eat an olive.*

Three tomato preparations, three different flavor sensations, three dishes centered on tomatoes that I really, really like. Do you know how to tell just how much I liked the tomato dishes? I DID NOT FINISH THE PORK PRODUCTS ON THE PLATE.

Caprese salad, I finally get you now. The sweet acidity of the tomatoes, the gentle milkiness of the cheese, the fresh lemony bite of basil, all with a hint of salt and bare drizzle of olive oil: there is a reason this is a classic. The tomato-soaked bread paired with sweet roma tomatoes, sweetly punchy red onion and a hint of vinegar? Italian peasants know where it is at.

Tomato tart? Holy shitballs, y’all. You know what, I’ll kick it up a notch: holy FUCKING shitballs. Little baby Jesus, Mary, Joseph and all the saints, the transformation that happens when you roast high quality, fresh, flavorful tomatoes and concentrate their flavor is out of this goddamned world. The puff pastry was a mere vehicle for these priceless gems, it’s buttery goodness utterly forgotten. It was like the fucking rapture, me and these tomatoes. No single thing that I’ve eaten in the U.S. has ever made me as homesick for Italy as these damn tomatoes. What am I going to do when tomato season is over? HOW WILL I LIVE?

FYI, I’m not writing out recipes for any of these things, because (1) a caprese salad is just things stacked on other things, (2) there are a thousand recipes for panzanella that will lead you to a tasty result, and you’ll just end up making it up as you go along anyway, and (3) the tart only has the 5 ingredients mentioned (puff pastry, tomatoes, goat cheese, good salt, olive oil).

*Yes, yes, what’s wrong with me, olives are delicious, I’m crazy, I know, I know. I’m still not eating one.

0 thoughts on “You say tomato, I say to-WHOA, Nellie.”