On Moishe, on Herschel, on Schlomo!

Joy of joys: a Cheap Ass Monday that does not revolve around beans as a source of protein! Yea, there is nary a legume to be seen here.

Okay, that is not technically true, as there are peanuts involved and it is in fact the case that peanuts are legumes and not true nuts. But shut up, because you know what I meant. Do I come to your blog and nitpick you?*

Tonight, in a slightly fancy-pantsier version of Cheap Ass Mondays, protein and fiber-rich whole grains and veggies come together in curried summer vegetable fritters with sweet chili sauce and a peanut-quinoa pilaf. Or, for the more humble minded among us, veggie latkes with quinoa. L’chaim!

*I might, but I probably have a VERY GOOD REASON.

I wanted a meal that would revolve around the bounty of mid-summer vegetables, that wouldn’t relegate them as the mere side dish to a grilled chicken breast or filler for a bean burrito. But I’d still need a protein source of some kind to stave off a midnight Pathmark run for a package of mint Oreos and a pint of whole milk.*

Enter quinoa! Fun to say, more fun to eat! Also the “Mother Grain” of Inca society because of the central role it played! Overlook the fact that Inca Society ceased to exist hundreds of years ago! I mean, it’s a grain, not a smallpox vaccine.

Quinoa is light, easy to cook, home to all the amino acids, and nuttily tasty to boot. It also comes in designer colors (red and black), although the ivory color is most readily available. Who wouldn’t build a society around quinoa? Unlike many other grains, it’s best cooked like pasta, in a large pot of merrily boiling water with a few pinches of salt. Twelve to fifteen minutes, drain in a fine mesh strainer, and you’ve got quinoa. Make extra and re-heat it in the morning with some milk for a yummy hot cereal.

*Okay, now that I’ve said that I really wish I had those things despite my current lack of hunger. It’s both the eternal blessing and fatal flaw of this apartment that it is situated so near to a 24-hour source of mint Oreos, Ben & Jerry’s, and Cheddar and Sour Cream Baked Lays.

Mix in some wood chips for added roughage.

That sounded blue, and I apologize.

That’s when I though of latkes. I first started making traditional potato latkes a few years ago, and made a sweet potato version during a short-lived fit of South Beach Diet mania (I’m only human). What if I used a sweet potato latke as my base, working in lots of other grated veggies? What if I added some curry powder to these latkes-cum-fritters? Fucking genius, that’s what.

I convinced kitchen gadabout and A+ husband Brian to put his knuckles at risk for the sake of dinner and hand-grate some sweet potato, some carrots from this week’s CSA box…

…some yellow summer squash, some zucchini, half a CSA onion and some garlic. In the interested of tightfistedness I stopped the veggie list there, though the squash makes this an especially economical summer meal. If you live in the ‘burbs or are/have befriended an urban gardner, chances are that they are currently trying to give their excess zucchini away to errant passersby, most of whom flee on foot weighed down by zucchini they’ve already been foolish enough to accept from other friends or neighbors. If you’re not so blessed, their seasonality keeps them reasonably priced.

NOTE: If you’re having trouble giving away your zucchini (or plum tomatoes, not that I’m complaining about my little city garden), you can always leave it on people’s stoops late at night. 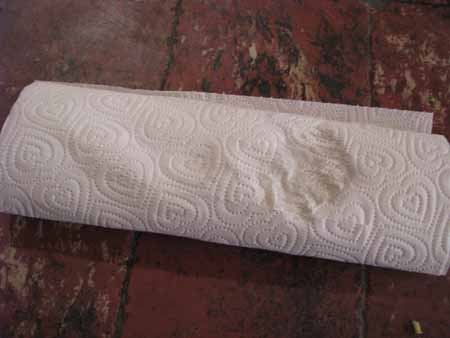 GodDAMN it, I told you we were out of tortillas. This is going to bind me up for a week.

I had Brian grate all the vegetables except the onion and garlic onto long sheets of paper towels, which I then rolled up like little fibrous burritos. Not just because I’m crazy, although I am, but for a real actual reason. For a good fritter texture that holds together nicely, you’ve gotta get as much excess liquid out of the veggies as you can. So I make my little burros and then wring the hell out of them over the kitchen sink.

When you do this, you’ll do it with a thin dishtowel of even layers of cheesecloth, both of which will hold up much better to wringing than will paper towels. But I don’t have any more cheesecloth and all the clean dishtowels were in the closet downstairs, so I would have had to go DOWN and then come back UP and FUCK THAT.

I wrung like with like; carrot and sweet potato have about the same amount of water (not a ton) as do the two summer squashes (a buttload). The onion and garlic are grated directly into the mix because you want to catch every drop of their deliciously pungent juices.

Also a little blue. I don’t know what my problem is tonight. 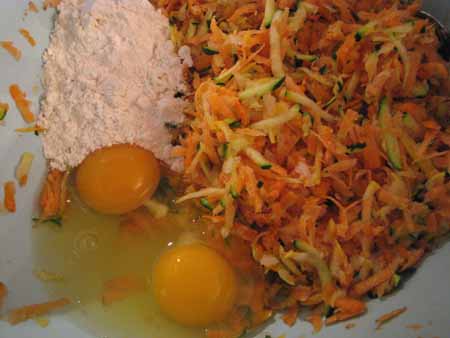 Fritter components just before the magical combination that transubstantiates them into a unified whole, “fritter batter.”

I believe that Cheap Ass meals should be not simply cheap, but also easy. So rather than getting fussy with the fritter mixture, I did everything in one big bowl: Dump in all the veg. Push to one side. Crack in eggs and add flour. Combine egg and flour with a fork, then combine with veggies. Season. (I like to do this after everything is mixed together because it cuts down on clumpy pockets of salt and spice). 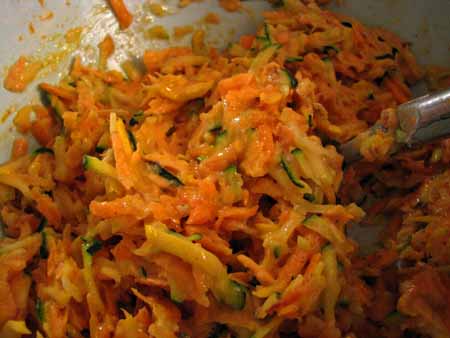 No, I don’t know what that means, either.

I heated about an eighth-inch of oil in a wide skillet. When my teeny weeny test fritter indicated that we’d reached optimal pan-frying temperatures, I added the fritter mixture by the quarter-cupful, smushing each one down with a wide, flat spatula.

There may be some of you out there who are thinking that this sounds good but that you’ll never make it because you don’t fry. I know this because I was one of you not so long ago. All the splattering. All the grease to dispose of. Food that’s not good for you.

I know this is a sensitive decision that each person must make for him or herself, but I urge you, if you are toeing the line: take the plunge. Frying at the right temperature (around 375) ensures that food will hold together and crisp nicely with minimal penetration of oil into the food. If done correctly, it’s also highly likely that you’ll be able to strain any burned bits out of your oil, re-bottle and re-use it.

I don’t mean to push. I know this is difficult. I just want to let you know that, you know, I’ve been there.

Am I an honorary Inca now?

While the fritters cooked, I tossed the drained quinoa with roasted peanuts and a chiffonade of basil. (I used plain ol’ basil, you’ll look harder for lemon or Thai.) It had taken on enough seasoning during cooking and didn’t need anything further. The light quinoa went nicely with the deeper nut flavor of the peanut and the fresh herb, so I left well enough alone.

I spooned some quinoa onto my plate and plunked two fritters down alongside; I also added a little dish of (commercially-available, non-homemade) sweet chili sauce.

I loved this dinner. I expected to like it. I loved it. The fritters were crisp outside, warm and soft inside, cooked through but retaining a hint of vegetal bite. The delicate curry brought all the flavors together without overwhelming the vegetables, and the sweet chili was a perfect dipping sauce. The quinoa was light, a little salty and a little crunchy. The basil, which I’d been really unsure about, added a pleasant freshness. Each component of the dish was good by itself or together with the other pieces – the hallmark of a successful pairing.

You could change up the seasoning however you’d like; the base veggies are highly accommodating. It would also be sinfully easy to invite other types of veg to the party, thus enabling you to run some evasive action by veg-averse children or spouses. Because look, it’s fried! You get to dip it! It can’t be good for me! HA. YOU’RE EATING VEGETARIAN. Swap out the egg, and it could be VEGAN, for Christ’s sake. SUCK ON THAT.

Roughly grate sweet potato and carrot, using fo-pro or box grater. Dump shredded veggies into a clean dish cloth, twist closed and wring over the kitchen sink, extracting as much liquid from the veg as strength allows. Dump the desiccated veg into a large bowl.

Repeat with both the squashes.

Grate the onion and garlic directly into the bowl with the other veggies.

Push all the veg to one side of the bowl. Crack the eggs into the empty side; beat briefly with a fork to combine. Add flour to egg mix, combine quickly (don’t worry about being perfect), and then mix the egg/flour with the veggies. The veg will just be coated; this isn’t a thick batter. Add the seasonings and mix again to combine.

Add to the hot oil by 1/4-cupfuls, pressing down to flatten slightly. Pan-fry until golden brown on both sides, 4-5 minutes per side; monitor the oil to make sure it stays between 350 and 375.

0 thoughts on “Cheap Ass Monday: You've got me all a-frittered”