How is this dinner, and not dessert? Not that I’m complaining, but come now, Jews. You’re pulling my leg, right?

Where did I leave off? Oh, right, with an aborted attempt at blintz casserole and my gradual descent into the gaping maw of madness. I’m back to my standard non-psychotic level of insanity, and that can only mean one thing: I can stop throwing dozens of hours of my life away watching Olympic beach volleyball in a drug-induced stupor.* Also, baked cheese.

*Although I did like how they played the cock rock in between serves, to make it seem like they were playing at a real Jersey beach circa 1991 and not a stadium in China. Can YOU take me down to paradise city? I thought not.**

**Also at a Jersey beach the matches would probably involve more brawling, which I believe the Olympic Committee frowns upon outside of events that are supposed to involve brawling, like judo and field hockey.

I’m sorry for how I’ve neglected you, my precious.

So: blintz casserole with blueberry compote, courtesy of The Bon Appetit Cookbook

. You might think, as did every single person to whom I mentioned that I was making this dish, that a blintz casserole would be lots of blintzes (essentially, cheese-filled crepes) smushed lined up in a casserole dish and baked, possibly with some kind of topping or binding agent.

But you would be wrong, because Bon Appetit’s blitntz casserole is ONE GIANT BLINTZ. A thick layer of cheese is carefully spooned over a light cake-like batter, topped with more batter and baked. It is the blintz before which all other blintzes tremble in terror and shame. The King Blintz. The Augustus Blintz Imperator.*

*It is possibly worth mentioning that noted Jewish grandmother Grandma Ruth was NOT IMPRESSED by the idea of the uberblintz, which she did not believe could compete with or even deserved the moniker of a true blintz. Needless to say, she was eventually humbled before the awe of the giant blintz, as were we all.

You can’t HANDLE the blintz!

Since there are only two of us I decided to halve the recipe, which I figured would be fairly heavy, so that meant I only needed twenty ounces of cheese (ricotta and cream, to be precise).

If you can be bothered to do the math (And who can? Not me, I used a calculator), you’ll immediately see that a full-sized blintz casserole is filled with FORTY OUNCES OF CHEESE. As it is not listed as serving 60 people, I can only conclude that the Bon Appetit organization, possibly either in league or competition with Paula Deen, is trying to kill us all and is not to be trusted. I don’t care if Orangette writes for them now; I’m frightened.

But the cheese mixture was already made up by this point, you know? No point in stopping. Luckily a half-batch of the batter only has a single stick of butter, so it’s not too bad. 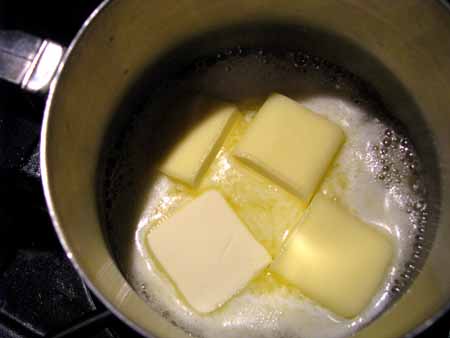 This is a totally gratuitous picture of butter. Because butter? Makes things good.

The batter was a simple affair of flour, sugar, eggs and milk; it was thin and pourable, but had more heft than a crepe batter and didn’t need the 1-2 hour waiting period crepe batter typically does. I poured 2/3 of it into a buttered baking dish and carefully heaped the cheese on top, trying to disturb the batter as little as possible. Which is not the easiest task with a pound + of cheese.

I didn’t want to risk disturbing the batter more than already necessary, so I decided not to bother trying to smooth the cheese out, assuming it would even itself out in the baking. I poured the remaining batter over the top, trying to get as much coverage out of it as possible.

In its pre-baked state the casserole looked woefully, laughably, pitiably out of proportion – enormous mounds of thick cheese coated by the barest layer of runny batter. Certainly not what one expects from the X-Blintz. But into the oven it went, to transform over the course of an hour and a half at 300 degrees.

An aside: Brian is currently slumped on the couch downstairs, watching Olympic beach volleyball. Should I call my mental health professional? Oh well, at least the men wear actual clothes when they play. 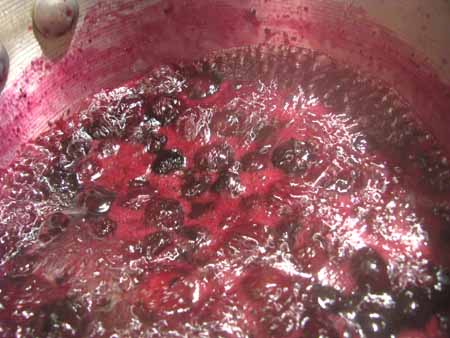 Isn’t “roil” a great word? So evocative. It could refer to a merrily bubbling pot of berries, or to gastrointestinal distress. I wish people would use it more in conversation.

Here’s where I confess to a slight bending of the smackdown rules: the blintz casserole recipe specified that it was to be served with strawberry jam and sour cream. Brian, my resident Jew, was adamant that cheese blintzes should ONLY be eaten with some form of blueberry topping, lest Yahweh draw a second flood down upon the earth.* Making blueberry compote sounded more fun than buying a jar of strawberry jam, so I acceded to Brian’s wish.

The compote was stupid simple. I mean, even an over-Xanaxed bipolar woman in an Olympic synchronized diving coma could make it: bag of frozen blueberries, equal parts water and sugar, heat until berry explosion is achieved (with the assistance of a potato masher if need be), cook down, add some whole berries near the end for texture. Compote complete.

*Okay, maybe this is a little hyperbolic. Maybe just a plague of fruit flies around the bananas on your counter.

Once you mix the blintz components, there is NO TURNING BACK.

I took the casserole out of the oven at exactly the 90-minute mark, not wanting the cheese to set up any more than necessary. The batter had puffed and browned beautifully over the cheese, creating a puffy, level surface. We let the casserole rest and firm. I sliced some fresh cantaloupe to go alongside, having no idea what an appropriate side dish would be. I mean, can you serve sauteed green beans along side a blintz casserole? Admittedly, I’m a blintz casserole novice, but it just doesn’t seem right. 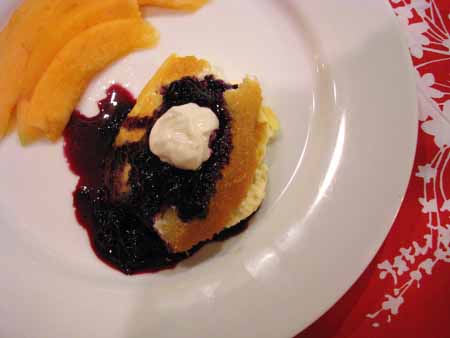 Total estimated amount of cheese in this serving: 17 kilograms.

I scooped a mound of casserole onto my plate, added a generous ladle-ful of berries and topped it with a little dollop of sour cream for that little extra nudge of milkfat the dish had really been crying out for.

BLINTZ CASSEROLE RULES MY WORLD. It is warm and creamy and just slightly sweet, and the dough-to-filling ratio in the final product is just right. It’s better than klonopin and valium COMBINED.

Okay, that last part isn’t true AT ALL, but blintz casserole is really good. I definitely needed a good bit of fruit with mine, but a little extra blueberry compote never hurt anyone, right? I still maintain that this is rightly a dessert, but Brian’s entire family tells me that it’s a completely appropriate dinnertime meal, and who am I to argue? The goy in-law, so I keep my mouth shut and eat my blintz. If you tell me it’s okay – encouraged, even – to eat dessert for dinner, I AM not going to complain, and I will probably try to marry you.*

The blintz is dead. Long live the blintz.

*Actually, right now I want to marry every single one of you. I haven’t been able to personally respond to all the amazingly wonderful comments and emails I’ve received from you, the ridiculously wonderful people who seem to enjoy listening to me ramble about food, but they were more appreciated than you can know and they were all read and re-read and re-re-read during some dark times. Thank you, thank you, thank you.