Have I mentioned to y’all lately that you’re awesome? Because you seriously are.

Modern pharmacology and I are gradually clawing our way toward stability, and most of you correctly surmised that I’d be skipping my own First Thursday for August. Which I did, because it was getting hard to adjust seasoning correctly what with all the tears in the pot fucking up the salt levels. But some of you didn’t skip it, because you are supportive and wonderful and possibly also slightly crazy yourselves, and I couldn’t deprive you of the joys of roundupedness.

[eatingclub] vancouver comes late to the joys of radishes, but they’ve embraced these sassy little roots with a vengeance with radishes, three ways from Everyday Food

magazine, including one of my all-time favorites, raw radishes with good butter and sea salt. 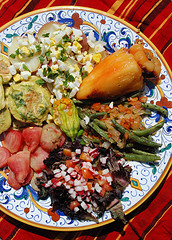 I’ve said it once but I’ll say it again (and again and again): that little Maybelle will eat ANYTHING. Feeding Maybelle explores two things I’ve been wanting to work with more – Turkish cuisine (a la Classical Turkish Cooking

by Ayla Algar) and stuffed squash blossoms – with a stunner of a vegetarian mezze platter.

She complains about the lack of color in her dish, but I’ve gotta say that I just don’t see it. Okay, the pepper is maybe a slightly wan shade of peach, but I still say she met the “colorful” guideline. My blog, my rules.

Closet Cooking uses a recipe from Proud Italian Cook and tackles one of the most intimidating (read: involved and tedious) vegetables: the artichoke. It seems like there’s a lot of trimming and cutting and whacking and hammering and possibly bandsawing for a relatively small amount of artichoke, so I think I’ll let Closet Cooking handle them on my behalf.

But, they are grilled! And have aioli! Which equals automatic deliciousness. So despite a blatant disregard of the rules (it’s called Thursday Night Smackdown, people, not Whenever the Hell I Feel Like It Smackdown, and recipes should come from cookbooks or magazine, ‘member?) I would gladly consume these babies. Many of them. And I would drink much wine while doing so, and there would be no small amount of merriment caused by the wine’s interactions with my various medicaments.

Broad Beans in their pods:
So much pod, so little bean.
Delicious ennui.

. Well, she doesn’t actually bring it to us, because I’m pretty sure I’d be much more excited right now if she actually were.

Join us all for First Thursday September 2008, won’t you? Theme: The Grill.

And thank you, from me and Brian. Thank you, thank you.