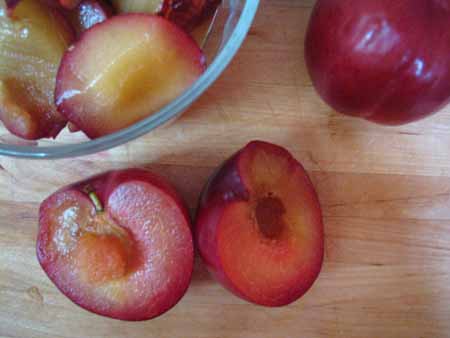 What a relief it is, mothafuckas.

So I mosey into Pathmark the other night looking for bargain basement, just-about-to-turn plums to make some sorbet, bag up a couple pounds of soft, deep crimson beauties and bring ’em home only to discover that they’re not plums and I should pay more attention to labels. They’re pluots, a plum-apricot hybrid. Frig. I really wanted plums.

I bite into one to get a sense of the flavor, and I gotta tell you: pluots are a SHAM. I know a plum when I taste a damn plum, and these? Are freaking plums. But I can’t be too pissed at the pluots, because I’d wanted plums anyway. Serendipity! 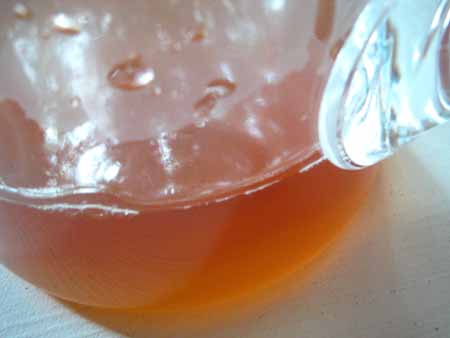 And this is the pitcher of bourbon I drank while chopping the plums.

I wanted to make plum sorbet because I love plums but I’m scared to make plum ice cream. Last time we were in Rome we made repeated trips to San Crispino, a small gelateria near the Trevi Fountain with a well-deserved reputation as making Rome’s best gelato. Every flavor we tried was astounding, intense, best of class, shaming all other frozen confections that dare to call themselves gelato. It’s like when the Backstreet Boys first came out, and you were all “KEVIN* I LOVE YOUUUU!!! BACKSTREET BOYSZ 4EVA!!!” And then N*Sync hit the scene and you were all like, holy shit, are the Backstreet Boys even music?

San Crispino’s plum gelato is so toe-curlingly good – I’ve never had an actual plum as good as their plum gelato – that there’s no way I’m going to touch it. So, sorbet instead of gelato, plum with white tea to mix things up, and a garnish of sake-and-ginger marinated plums.

I made some highly concentrated tea and set it aside to cool while I dealt with the so-called pluots. If you make extra tea concentrate, you can keep it in the fridge and have insta-fresh iced tea whenever you want, just dilute and enjoy.

*This is the name of a Backstreet Boy, right?

Actual quote from tonight’s Tour de France commentary: “It’s not over until the raven plucks out your eyes.”*

I decided not to peel the plums, ostensibly because I wanted to impart some of their gorgeous color to the sorbet but more likely because it seemed like a lot of work. I whizzed them in the fo-pro with some sugar to offset their tartness and the herbal bite of the tea.

I ran the resulting liquid through a strainer to get out as much of the skin as I could, and was rewarded with a smooth, deep mauve puree. I whisked the tea concentrate in a little at a time, tasting as I went, to reach the perfect balance of tea and plum, and added a touch more sugar – since cold mutes flavors, you want the flavors of an ice cream or sorbet base to be a little more in-your-face than you might think so they’ll remain intense after churning.

I chilled the mix in the fridge before pouring it into my ice cream maker. I flipped the switch and crossed my fingers, because I’d pulled all the proportions for this out of my ass and had no idea whether it would actually freeze into a sorbet-like texture.

Thankfully, the sorbet quickly started to firm up, lightening in color and taking on a smooth texture. After about 20 minutes of churning it was as firm as it was going to get in the machine, so I scooped it into containers and shooed them into the freezer.

Incidentally, I am taking donations for an ice cream maker with a compressor, which would enable me to make more ice cream faster. If it helps, I can have myself declared a non-profit corporation and you can take it as a tax write-off.

While the sorbet froze I briefly contemplated making some rosemary shortbread, as I’m a big fan of the rosemary-plum combo. But that involved softening butter, turning on the oven and pricking decorative designs in dough with a skewer, something I haven’t done and hope never to do. It seems like a short hop from pricking decorative designs in shortbread with a skewer to scrapbooking, and then I’d need a special room for scrapbooking, and then I’d have to sell my apartment and move to a bigger place, which I can’t afford and besides I really like my apartment. Shortbread is out.

Instead, I decided to stick to an Asian theme and marinate some pluotm in sake and ginger. Easy, delicious, AND you end up with plum and ginger-infused sake for later. Huzzah! 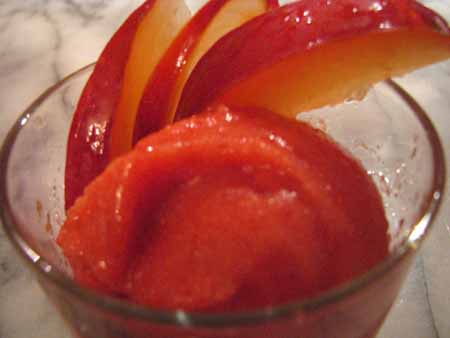 When the sorbet reached a scoopable stage (I would have let it freeze a bit longer which probably would have helped me get a better photo, but I’m not good at waiting) I dished up two scoops with a few slices of plum; at the last minute I also decided to drizzle a spoon of the infused sake over the top.

When I’m good, I’m good, and tonight I am good. This sorbet is fantastic. The texture is gorgeous, light and smooth, not the least bit icy. The final color is a lovely soft magenta. The tart sweetness of the plum is in perfect balance with the herbal, slightly floral tea. The marinated plum adds some additional freshness, and the final hint of sake adds a very slight bite and some complexity.

Watch out though, because after you fix yourself a serving this is what happens: 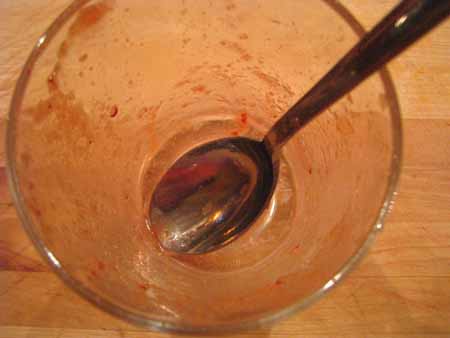 Plum-White Tea Sorbet with Sake and Ginger Marinated Plums
The flavors will depend on the quality of your tea and plums, so taste as you go and be prepared to adjust if need be.

Put 1 1/2 cups of plums and the sugar (start with a bit less than the total amount) in a food processor and blend until smooth. Taste, and adjust the sweetness if necessary. Strain the puree through a fine-mesh sieve into a large non-reactive bowl. Whisk in the tea. Put the mixture in the fridge for at least 2 hours until thoroughly chilled.

Freeze the plum-tea mixture in your ice cream machine according to the manufacturer’s instructions. Store the finished sorbet in the freezer to allow it to firm up.

While the sorbet is freezing, slice the remaining plum thinly. Toss with the ginger and pour the sake over. Let sit in the fridge for at least 1 hour, and preferably more.

To serve, place 2 scoops of sorbet in a glass. Garnish with a few plum slices. Drizzle a tablespoon of sake over the top.