Here it is: the first ever round-up, for the first-ever First Thursday event! Nine brave souls took the challenge, followed the recipes, and produced some (mostly) delicious albeit beige food. Thanks to everyone who participated! Pat yourselves on your collective back. To everyone else: FOR SHAME! You know who you are.

Next month, we kick off themes. For August 2008, we combat the scourge of beige with colorful produce. Our theme: A seasonal fruit or vegetable with which you’ve never worked before.

On to the recipes!

Sometimes, we must fail so that others may learn. Although frankly, I’m not sure how any dessert featuring chocolate and hazelnuts could be a failure unless it was also laced with cyanide (and there would have to be a LOT of cyanide).

Despite the COMPLETE ABSENCE of cynanide, Fig & Cherry is less than thrilled with the Self-Saucing Chocolate Puddings from seemingly omnipresent Aussie foodie Donna Hay’s

. Not one to rest on her floury laurels, she topped them with bacony refried beans, beef, guac, lettuce and hot sauce.

Kudos for working bacon into a recipe that has nothing to do with bacon!

The dynamic duo behind Fotocuisine pulled a little Trading Places to create this 40 clove garlic chicken with pasta carbonara.

They earn bonus points for (1) using a full half-pound of bacon, (2) spitting in the face of Rachael Ray and using the Better Homes and Gardens’ Big Book of 30-Minute Dinners

, and (3) not being afraid to feature close-up photographs of Christey’s frighteningly misshapen thumbs.

Ann of Redacted Recipes claims to be scared of me although I’m not sure why; I told her I was TOTALLY FRAMED on that arson thing. Maybe it’s because she brazenly flouted the rules, using a recipe from Martha Stewart’s

Still, I would think twice about committing aggravated assault against her if she’d make me some of these ravioli with egg yolk and truffle butter.

No animals were harmed in the making of this tart, although a rolling pin was severely mangled and some ires were raised. 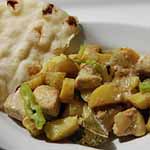 Maybelle is a very lucky little girl who gets to eat things like curried chicken stew with potatoes, courtesy of Curried Favors: Family Recipes from South India

I can say now that she’s lucky; as a child, this would have horrified me and I would have pitied her. In fact, this child is probably already a more adventurous eater than I will ever be. Rock on with your curry-eating little self, Maybelle.

She’s going meatless with some stovetop mac and cheese. As we all know, if you’re going to cut out the bacon, you need to make up for it with lots and lots of cheese. And she uses the First Thursdays badge in her post, which makes me feel important. Thanks!

Pannifer’s Food and Such injects a much-needed shot of color into the roundup with some asparagus pesto with penne rigate spaghetti.

Her cookbook of choice, Truly, Madly Pasta: The Ultimate Book for Pasta Lovers

, has quite the twee title, no? Then again, who am I to judge? Oh, right, the judgmental blog owner! That shit is twee. (But that doesnt mean I’d turn down a plate of this pasta.)

, and has never found one of its recipes to be a flop yet. Least of all this leek and bacon risotto.

Is it creepy that I think I have a crush on her flatware? It’s REALLY nice flatware.