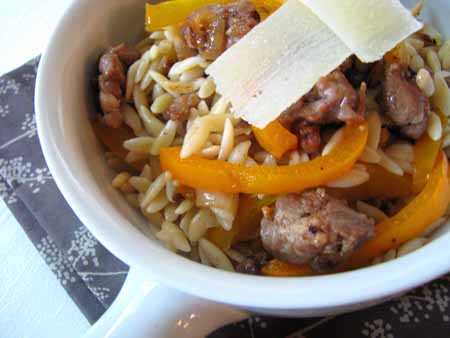 Not actually on, near, under, or down by a boardwalk.

I’m going to tell you right now: this post? Is not really funny. Feel free to leave if that’s a problem, and we’ll be back to our regularly scheduled programming later this week.

As you can imagine, it’s been a bit of a rough weekend; I haven’t really felt like cooking, let alone photographing and describing my meals in detail. Funerals and their associated activities are always kinda rough, and I’m not nearly far enough in the mourning process for my own father not to have all that shit get dredged up, compounding things. Blargh.

I gotta tell you, the Orthodox Jews and their burial services? I to the N to the T-E-N-S-E. It’s so…biblical, with the actual rending of garments and the shoveling and the Hebrew and the phlegm. I’m emotionally drained just thinking about it. 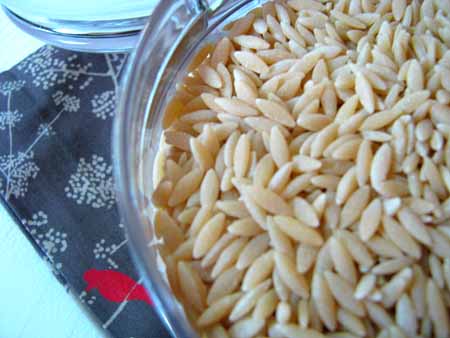 After an afternoon of going through old photos of me and my dad and getting weepy-eyed*, I needed something (1) tasty enough to entice me to eat it, (2) quick and easy enough to force myself to get up and make it, (3) that is not a bagel (Jewish mourning involves a LOT of bagels) and (4) cheap. And in my book, all of that points to one thing: pork.

In particular, sausage. I’m Italian and I grew up near the Jersey Shore, and that means that I have both genetic and environmental predispositions to sausage. I wanted the essence of a classic down-the-shore sausage sandwich, but without the enormous hoagie roll and with a smaller amount of sausage to keep costs and triglycerides down. So: sausage and pepper orzo.

*90% because of my dad, 10% because of all the TERRIBLE, TERRIBLE haircuts I’ve had over the years. Why did no one tell me?

I never actually spent a lot of time at the beaches adjacent to Jersey’s boardwalks, because I was a nerdy, bookish, classical-music playing precocious yet freakishly tall dork and not a hot bikini babe with a penchant for airbrushed t-shirts and heinous tan lines. But the boardwalks were another story. Predictably, my mother hated them and their disgusting American foodstuffs. My dad and I? Boardwalk food fiends. Sometimes my dad and I would head to the (non-boardwalk, nature preserve) beach first, but more often we’d drive down nights just for the holy trinity of Jersey boardwalk eating: sausage and peppers, frozen custard and zeppole.

I know some people are partial to the fried clams and enormous, 28-inch pizzas. Not everyone can be right about everything, y’know? Plus, more zeppole for me.

I admit that when I was younger, I was an incredibly picky eater. I NEVER got onions and peppers on my sausage sandwich, and would pick off the slightest particle found clinging to my sausage; I had the super-magnifying vision young children seem to have when it comes to shit like that. Frankly, had I been left to my own devices, I probably would have eaten nothing by zeppole, like the time I went to stay with my relatives in Italy one summer without my parents and absolutely refused to eat anything but gelato. (One day record: 8 cones.) (I was only 6. I’m pretty sure I could beat that today.)

Thank god I came around, because life without onions? Terrifying. 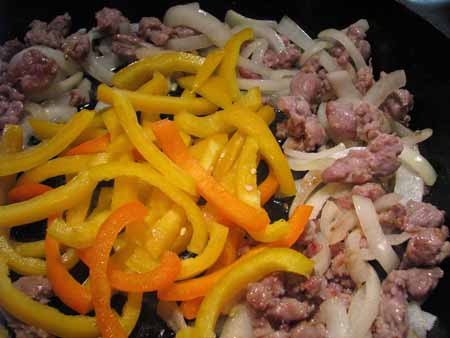 I crumbled the sausage links before frying to extract more delicious sausage juice fat, in which I sauteed the peppers and onions. I wanted to add another layer of flavor and recalled that often, the pepper component of sausage and peppers is cooked with some vinegar for added bite, so I deglazed the pan with a splash of balsamic (white would be nice here but I only had regular, so that’s what I used). The vinegar added an ever-so-slight glaze to the veggies. 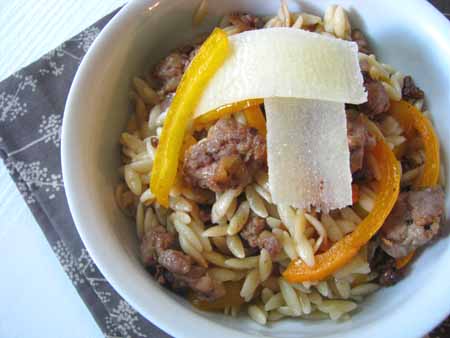 I tossed the slick, sausage-y mess with cooked orzo, heaped some into a bowl and shaved a little pecorino on top for salt. And even though I didn’t feel like eating and had fully planned to save my portion for lunch and lie to you all about how it tasted, I took one bite and ended up finishing the whole bowl. It was everything I’d wanted it to be – quick, cheap and tasty, sure, but also transporting and comforting. Fennel-laden sausage, sweet barely-caramelized peppers and onions bathed in pork fat, tart but not overpowering vinegar and occassional punches of salty cheese with just a little starch in each bite. Add some fresh lemonade and fried dough, and I could have been back in Seaside Heights trying to hit one of those fucking rubber frogs into the rotating lilypads to try and win a stuffed Deputy Dawg.

Now go call your fathers and tell them you love them. If you don’t have yours either, then go eat something the two of your enjoyed. If you don’t have either, or your dad kinda sucked, then make this. My dad was a good guy, I don’t think he’d mind sharing.

Sausage and Pepper Orzo
Do you really need a recipe? I’ll give it to you anyway. BTW, this is also good at room-temperature.

Bring a pot of water to the boil. Add a few teaspoons of salt and the orzo. Cook according to package directions. Set aside.

Chop or break the sausage up into small chunks. Heat a heavy skillet over medium heat and add the sausage. Fry until sausage is mostly browned and has released some fat, 4-5 minutes. Add the pepper and onion and saute until the veggies have started to color a little but are not completely limp. Pour the balsamic into the pan and scrape up any brown sausage-y bits sticking to the pan.

Dump the cooked orzo and sausage mixture into a large bowl. Toss to combine. Grate some parm or pecorino over the top, if you’d like.

0 thoughts on “Cheap Ass Monday: Down by the Boardwalk”