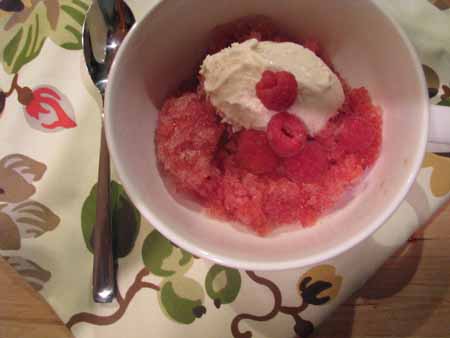 If you look at the categories or URL then you are a FILTHY CHEATER.

It’s refreshing, light, fruity but tart, utterly irresistible. It looks so civilized, doesn’t it? Like something you would serve to the ladies who lunch when they come over for the garden party benefiting the foundation one of them started to purchase wheeled carts for paralyzed needy dachshunds. I almost don’t want to tell you what it really is, because I don’t want to damage my reputation as ONE CLASSY BITCH. 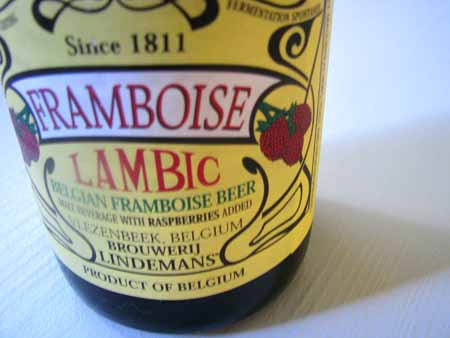 Sigh…you know I can never keep a secret from you.

It’s beer. Specifically, beer granita, aka frozen beer. No added sugar, no added fruit, no added anything, just beer. Frozen. Served in a cute teacup and garnished with fresh fruit, but a cup of frozen beer nonetheless. And it is WONDERFUL and you will all go and make it this very weekend and you will swoon, I promise you.

Have I mentioned that it’s FROZEN BEER? Beer for dessert! I think this might finally get me that Nobel I’ve been after. If frozen dessert beer can’t create lasting world peace, what can? Surely not specialty malt beverages; it was the frozen Mike’s Hard Lemonade that got us into this mess.*

Granita is the simplest, most accessible frozen dessert around. No fancy equipment needed, just a pan and a fork. Typically, it’s made with sweetened fruit juices or purees, or sweet, strong espresso. You pour the liquid of your choosing into a shallow dish, stash it in the freezer, and scrape with a fork once every half hour to an hour to break up the forming ice and create a delicate, crystalline, icy fluff. It can be eaten as is or paired with something a little richer and creamier, espresso granita with whipped cream being the classic example.

*I would never freeze Mike’s Hard Lemonade, but fresh lemonade with a hint of vodka would make a smashing granita in more ways than one.

The stages of beer freezitude.

Well, beer is a liquid, is it not? The photos would seem to indicate that. And while I wouldn’t waste my time freezing a pan of Budweiser (although that might actually make it better…but I’m still not doing it) there are plenty of wonderful, complex beers I’ve always thought would be excellent candidates for this treatment.

High on my list to try was fruit lambic. Lambic is a traditional Belgian beer made with wild yeast native to the Brussels area; the wild yeast produces a distinctive cider-y flavor and funky aftertaste. It’s often brewed with fruit – pure lambic is unbearably sour – the most popular and easy-to-find flavors being raspberry, peach, sour cherry, currant and green apple (I’ve heard tell of banana, but while I like both bananas and beer, the idea of banana beer makes me throw up in my mouth the tiniest bit).

The raspberry, peach and apple are my favorites, and any would make a lovely granita. But I happened to have a bottle of Lindeman’s Framboise (raspberry) lingering in the fridge for several weeks – we’d originally bought it to make beer floats but I kept eating all the ice cream before we got around to the float part – so it was conscripted for the cause and thrust into the freezer. 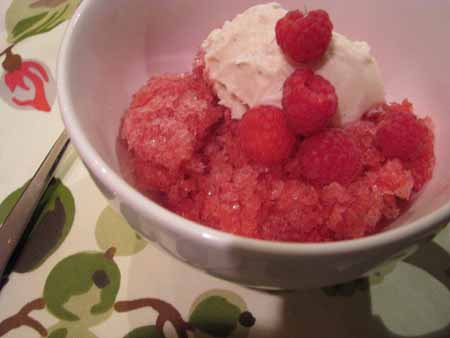 Last year, we raised enough for 35 dachshund carts. Let’s make it 50 this year – open your hearts and wallets, ladies!

Four hours of intermittent scraping later, I had a huge fluffy pile of tart raspberry granita with a slight boozy bite and shades of the distinctive Belgian beer funk. Chilling usually mutes flavors, but this granita still sings on the tongue.* I added a little scoop of vanilla ice cream and a sprinkling of fresh raspberries and had 10 minutes of frozen beer reverie.

Aside from tasting great and being insanely refreshing on a warm, humid night, you can also heap beer granita into a sno-cone holder and walk around the neighborhood eating it or offering it to young children and no one will be the wiser, something you can’t do with beer in a bottle. So granita is arguably the superior form of beer.

You can make granita with anything – fruit, herbs, wine, even vegetables. But what could be more humble, more all-American than (imported Belgian) beer?

Lambic Granita
Pour one 750ml bottle of the fruit lambic of your choosing into a pan. Stick the pan in the freezer. Stir/scrape the ice crystals every 30-40 minutes until the mixture is completely frozen into fluffy ice crystals. Eat it immediately or eat it later, but definitely eat it.

31 thoughts on “Guess what this is. No really, guess.”