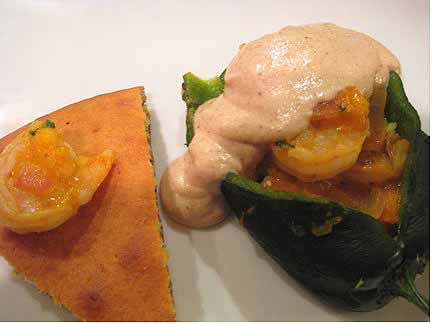 So a few weeks ago I randomly left a comment on a post at Serious Eats, the result of which was my being randomly chosen to receive a copy of Paula Disbrowe’s Cowgirl Cuisine. Paula is a French-trained New York-based food writer who removed herself from the big-city rat race to live in Texas, cook on a ranch and write a cookbook filled with pictures of herself. I know we’ve all wanted to flee our humdrum existences to live a life of leisure surrounded by goats in the Texas Hill Country, where “Texas Hill Country” is read as “Tuscan villa” and “goats” as “Italian supermodels.”

Seriously, there are a LOT of pictures of her in the cookbook. And not pictures of her cooking or engaging in Texas-type activities like riding horses, erecting homemade border fences or driving to Mexico for cheap over-the-counter pharmaceuticals; that would make too much sense. Just pictures of her standing around, lying in fields and, I shit you not, stripping down to go skinny dipping (don’t get excited, you can’t see anything).

Anyway, despite all the auto-photography and the terrible, terrible title, I bring you: shrimp-stuffed poblanos with walnut sauce and classic cornbread. 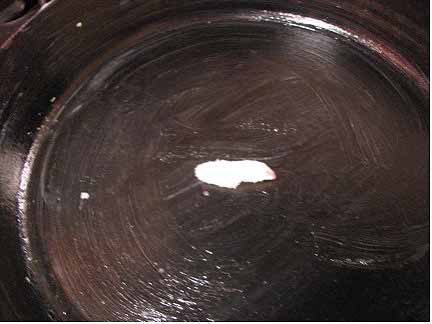 If you eat bacon – and I KNOW you eat bacon – then you should be hanging on to your bacon fat and using it to impart bacony goodness to more foods. One of those is this classic cornbread: the cast-iron skillet is greased up and pre-heated, creating an instant crispy delicious crust around your cornbread.

I don’t want to re-ignite the War Between the States, but I know there are some Southerns who will be deeply troubled by the fact that this recipe has added sweetener. Northern-style cornbread is typically a bit moist and a bit sweet, while Southern cornbread is straight-up crumbly corn goodness TO WHICH NO SWEETENER IS ADDED ON PAIN OF DEATH. Edna Lewis will personally come back from the grave to chastise you, or so I hear. Apparently Paula Disbrowe is confident that she can take Edna’s ghost, because she unapologetically instructed me to include 2 tablespoons of honey to my cornbread.*

*I think Edna’s ghost could kick my ass. I bet she’s really tough and wiry.

Brian prepared the poblanos by roasting, peeling and seeding them. You can throw your peppers under the broiler as well, but we like throwing them right on the gas range, where it’s easier to keep an eye on them. The smell of roasting poblanos is gorgeous, and they make fun popping noises as they blister. Once they’re roasted, a few minutes in a covered bowl steams and loosens the skin, which then sloughs right off.

Even though roasting and peeling poblanos is old hat around here – sometimes I roast and peel a few hundred poblanos before breakfast – Brian read her instructions for roasting anyway. Which apparently suck, judging by his grumbling as he tried to figure out how to reconcile totally contradictory directives about when to remove the seeds.

I’m risking my life with these tomatoes for YOU.

While Brian tended to the peppers, I got to work on the stuffing. It starts with thinly-sliced garlic slowly heated in olive oil to impart its sweet, pungent flavor. Which is then discarded, which makes me very mistrustful; why would you throw away perfectly good sauteed garlic, the foundation of all that tastes good? I understand that it still lends its flavor to the oil, but it concerns me.

Red onion softens briefly in the garlic-infused oil, and a chopped tomatoes goes in. I chose some organic yellow heirlooms that I hope will not kill us all – I tried to pick the ones that were farthest away from the display of red tomatoes, just in case – and cilantro, ground coriander, orange zest and some triple sec which I found in the fridge, and I don’t remember ever buying triple sec and am wondering if it might have been left here by the people who lived here before us. Can triple sec go bad? I guess I’ll find out tonight.

The whole mess cooks down into a bright, jammy pile of mush that actually kinda looks and smells like it would be tasty on a peanut butter and jelly sandwich. 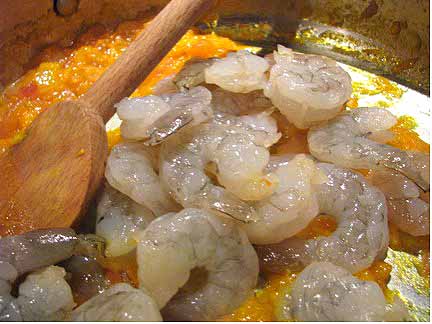 The shrimp go in just for a few minutes to barely cook through, since they’ll continue to cook in the oven.

I freely admit that despite my strict smackdown rules – no changes, so “I think this would be good…” additions – I threw in an extra ingredient: salt. No where in the recipe or instructions are we ever instructed to add salt, and I generally don’t find tomatoes, shrimp or walnuts to be inherently salty. Is there some kind of cowgirl objection to seasoning that I don’t know about?

I have a headache, so make up your own fucking caption. What am I, your trained monkey?

The shrimp are left whole, so you don’t really end up with a stuffing in the traditional sense. I heaped them into the poblanos and stuck them in the oven to finish cooking and heat through. While they heated, I threw the walnut sauce together.

The walnut sauce is pretty much raw; although it’s heated through, it’s not really cooked. Sour cream, bread crumbs, walnuts, cinnamon and walnut oil (and some more surreptitious salt) go into a blender.

They then try to destroy the blender with their utter refusal to blend. I don’t know if the blender was just the wrong appliance for this (although it’s what the instructions said to use) or if the freakishly thick organic sour cream I bought was to blame, but I’m pretty sure that I narrowly avoided an actual fiery blender explosion by throwing some warm water into the mix to thin things out. Still, it made a most un-blender-like sound, and the motor started to smell a little.

I scraped the sauce into a pot to heat it, but it was still so thick that it actually started to fry and brown in the saucepan. So I added more warm water, kept the heat as gentle as possible and whisked the holy hell out of it. It was still pretty thick, but at least had made the transition from “quasi-solid” to “mostly viscous.” 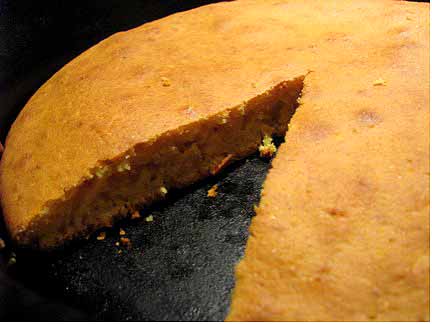 The Smackdown rules say nothing about pre-dinner snacking.

The cornbread came out of the oven all golden and fragrant and bacon-smelling. Everything was ready, so I rang the virtual dinner bell, rustled up the grub and we moseyed on over to the table.

So it’s not the prettiest plate in the whole world and I know it sounds like I didn’t like the recipe, but this was good. Strange – really, really strange – but good, once I got used to the flavor combination.

The cornbread was good, especially with some butter and honey slathered on top – yes, I’m from the North, I like my cornbread sweet and I’m not ashamed. Roasted poblanos have a little heat, but mostly a lovely sweet earthiness. The shrimp and tomato filling was fresh and bright, especially with the addition of cilantro, and just a bit sweet. The walnut sauce was creamy and very, very walnutty. The cinnamon gave it a sweet undertone, and it almost tasted like something that would be good on pancakes, although the dairy played well with the poblano. The creamy sweetness was a bit incongruous at first, but as my palate got used to the flavor combo I enjoyed it more and more; it was an interesting foil for the bright shrimp mixture. I’m not sure the dish would have been as pleasant with no salt at all, so I’m glad I broke the rules. GLAD, I tells ya.

25 thoughts on “Thursday Night Smackdown: It had a really good personality”