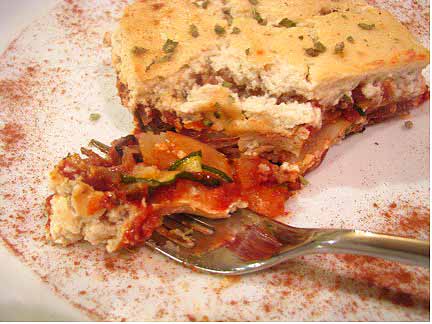 Another mistake, or a deliberate refusal to learn?

I’ve been wanting to start cooking more vegetarian meals; we’re definitely a little meat heavy*, which is both pricey and not super great for us. I’ve got the Moosewood

, the most butter-and-cream heavy veggie cookbook I’ve ever seen, and I recently picked up a copy of Veganomicon

. It’s a vegan cookbook, and I freely admit that while I had read good things about it, I bought it mainly for the title. Because who doesn’t love Evil Dead II? “Give me some sugar, baby.”

I thought I’d use the book this week because I knew I’d be eating a giant hunk of filet mignon at a gala event Wednesday night. Also because I have not learned my lesson about tofu (although as with the mac and cheese, it was not the tofu that doomed this dish (not that the tofu helped)). So: vegan moussaka.

If you don’t want to read about vegan moussaka, I’ll sum it up for you using Brian’s description of the meal: “Tofu? Tofucked.” And I promise animal fats up the wazoo next week.

See? It made the eggplant cry.

Before I launch into the meat seitan of things, I have to say that I am EXHAUSTED from last night’s event. It was my organization’s big yearly fundraiser, held at the UN, and I was on the run from 2 to 10pm. Madeleine Albright was our speaker, and she’s tiny and smart and told a very funny story about a stuffed pigeon. Ann Curry was there as well, and she has a penetrating warmth that borders on painful and causes anyone within a 15-foot radius to fall instantly in love with her. Not that you care about all that crap; the point is that I’m still really, really tired.

So it’s understandable that I would have fallen asleep on the couch tonight after salting my eggplant, meaning my eggplant sat for over an hour instead of 15 minutes. And I know, it’s up in the air whether salting eggplant is even necessary, which makes the final outcome even more irritating. 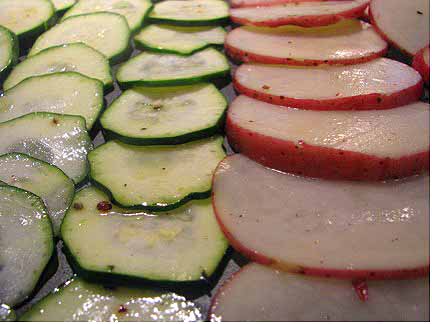 Traditional moussaka is a baked dish of eggplant and meat sauce (either ground beef or lamb) topped with a thick layer of bechamel. Vegan moussaka omits the meat, instead layering roasted eggplant, zucchini, potatoes and a cinnamon-spiked tomato sauce and topping the whole with a pureed pine nut-tofu “cream”.

I painstakingly sliced the veg with a not-quite-sharp-enough knife. You could see daylight through some of the slices, and I would have patted myself on the back had I not been holding a large knife while covered in eggplant sweat.

Two enormous trays of paper-thin veg went into a 400 degree oven, so I turned to the sauces (side note: why should it take 25 minutes to cook a sliver of zucchini at 400 degrees? Is it some kind of vegan thing?). The tomato is pretty basic: garlic, shallots, some red wine reduced, tomato. Thanks to Smoke-a-Thon 2008, I have gift bottles of wine a-plenty, and I carefully selected a Spanish red that had a fun orange label.

Ragu: It’s in there!

The Greek-ness comes with oregano, a shot of cinnamon, and a bay leaf. Then a quick simmer to reduce and meld the flavors.

You know, Ann Curry isn’t just smart and an excellent journalist, but she has adorable freckles. Ann Curry, if you’re reading this? Call me!

I never get tired of taking pictures inside the food processor. NEVER.

While I dealt with the veg and tomato sauce, Brian put together the pine nut cream. They call it “pine nut cream” and not “tofu mush” to trick you into thinking it will be good. 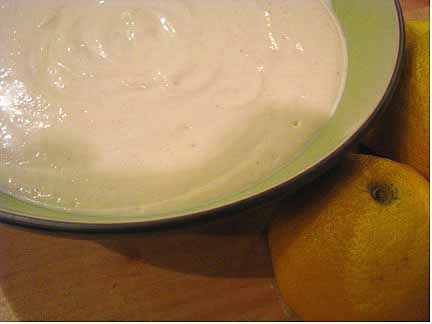 The pine nut fake-out cream starts with the nuts pureed with lemon. Tofu, nutmeg and garlic go in next along with some arrowroot to help the baked cream set. It tasted…not bad. Lemony, creamy, not super pine-nutty, but a nice texture.

I had higher hopes for the moussaka than the mac and cheese at this point, although that may have been because I don’t like moussaka in the same way. In fact, I’ve never actually had real moussaka, so I figured it would be hard to be let down.

Wait, maybe I DID learn a lesson tonight: no matter what you think about a situation, it’s ALWAYS possible to be let down. But try to stay upbeat. Also stay in school.

It was hard not to just eat all the potatoes.

Did I mention that I don’t have a mandoline?

Okay, I ate a couple.

Really, NO MANDOLINE! I know!

If I were in the midwest, I would call this a “hot dish.”*

I layered all the veggies and tomato sauce in a casserole dish along with some bread crumbs, and spread the pine nut fake-out cream over the top. The moussaka baked for 40 minutes or so while I took a nap in a chair directly in front of the air conditioner. Yes, it was only in the mid-70s, but vegan moussaka really heats the house up.

I wonder what takes more energy: cooling your house while making vegan moussaka, or raising a chicken for food? Not that I’m suggesting anything about the vegan lifestyle.** Just a little thought exercise, like Schroedinger’s Cat but with eggplant.

**Although it is the case that I implicitly mistrust anyone who voluntarily chooses not to eat cheese. 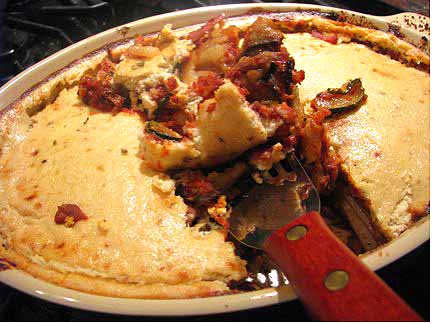 The moussaka came out nicely browned with some cracks running across the top of the pine nut fake-out cream, which had set up fairly firmly.

Tragically, it was totally inedible; even Brian, who once ate the hollowed-out shell of a deep-fried mushroom filled with ranch dressing – just because, not even on a dare! -couldn’t eat it. Apparently, when you fall asleep on the couch and forget your salted eggplant for an hour you don’t so much draw the bitterness out of the eggplant as you brine the eggplant. And if you’re not familiar with brined items, they’re salty. Really, really fucking salty. Since the brined eggplant had gotten nice and cozy with all the other veggie layers in the moussaka, the whole thing tasted like a salt lick.

The pine nut fake-out cream would probably have been benign if the rest of the dish had been tasty, but the burden of carrying the dessicated eggplant was too much for its fragile, tofu-y shoulders. It was fairly flavorless, and the baking time was so long that it lost most of its creamy texture and turned overly firm and dry. Everything you see above exited the kitchen via the garbage can post-haste.

So we were forced to haul out some leftover turkey and mashed potatoes (from earlier in the week, not from Thanksgiving). We were tired of cooking and don’t own a microwave, so we dumped chopped turkey and potatoes in a pot with a little extra milk and stirred the whole thing together over low heat. Because we are CLASSY MOTHERFUCKERS.

And you know? It was good. Really good.

42 thoughts on “Thursday Night Smackdown: Wherein I Fail to Learn a Lesson”