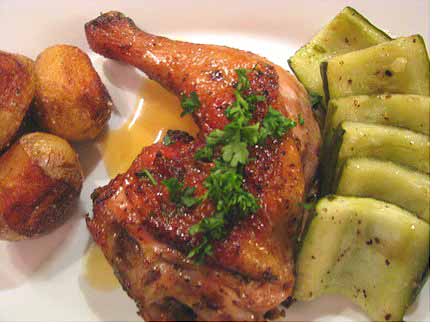 Nothing on this plate is not coated in butter. Nothing!

Every time I endure a Smackdown that stretches the boundaries either of food or my patience, I have to do a 180 the next week to recover. That’s why this week we turned to a chef who, although she has an entire chapter on meat-based aspics, would never ask me to eat pureed, extruded, poached, fried fish: Julia Child. Or, as I like to call her, La Grande Dame du Beurre. Join me on this buttery journey as we begin to Master the Art of French Cooking* with sauteed Mediterranean-herbed chicken with wine-butter-egg yolk sauce, baked cucumbers, and sauteed new potatoes, won’t you?

I could make this all sound much fancier by giving you the long, Frenchified names, but to do that I’d have to get off the couch and go upstairs to get the book. Although there is some Amaretto ice cream upstairs… nope, I’m not moving. Deal.

The French know their shit. At least, vis a vis radishes.

I stopped by Whole Foods on the way home from work to grab a few last ingredients for dinner. My stomach was rumbling since I’d only eaten leftover wonton soup for lunch, so I thought I would pick up the fixin’s for a little pre-dinner hors d’oeuvre: fresh radishes, some good sea-salted butter, and a baguette.

Along with the salted butter, I sprinked a little smoked grey salt on top. It was fresh and crunchy and peppery and salty. And I would never have eaten it had I read the recipes all the way through and known how much other butter my night would involve. Although I suppose you could legitimately argue that I brought it upon myself, since I should have just assumed that Julia would not be shy with the butter.

I prepped the cukes first, since they take an hour and a half from start to finish. I have a fixation lately on unexpected veggie cooking methods, like braising celery. Mainly because I don’t really believe that they’ll actually produce edible results. The celery was certainly not confidence-inspiring, so I’m not sure why I’m still on this kick, but there you go. And you kind of have to trust Julia, yes? Just tell me yes, please.

So I cut up my cucumbers – some nice English hothouse jobbies with few seeds and nice thick skin – and tossed them with vinegar, salt and sugar. I left them to sit for 30 minutes while I chopped some scallions and basil, then tossed the cucumbers and herbs together in a baking dish and poured melted butter over the whole thing.

And then they went into the oven for ONE HOUR. Maybe you bake cucumbers all the time and this isn’t surprising to you, but if you’d asked me what would happen to a cucumber after an hour in the oven, I’d say “melt.”

But who am I to say? I’ll tell you who I’m not: someone who has Mastered the Art of French Cooking. 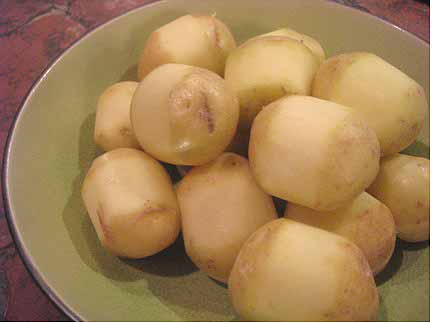 Currently butter-free, but soon to be covered in butter.

I love that Mastering the Art of French Cooking has the basics as well as the insane. Like, there’s a recipe for white rice. Of course, La Grande Dame requires ultimate precision and inserts her own details for even the simplest dishes. For sauteed new potatoes, she instructed me to carve them into identically-sized olive shapes.

I didn’t listen, although I did try a little cutesy ring-of-peel thingamabob. Julia was a saucy lady, so I like to imagine that she would not judge this too harshly. I am, however, willing to concede that my failure to artfully carve the potatoes may negatively impact my Mastery of French Cooking.

The potatoes went into a pan coated with 1/16th* of an inch of melted, foaming butter with a smidge of olive oil. La Grande Dame gives very precise directions: Allow the potatoes to sit still and brown for 2 minutes, shake them around in the butter, allow the other side to brown, sprinkle with salt, cover and cook for 15 minutes. All of which I did, and was rewarded with tater-tot like nuggets of creamy tuber goodness.

Well, that’s what they are once you’ve let them sit for a few minutes. If you were, hypothetically, to eat one out of the pan, it might seem a little more like a molten potato bomb.

*Okay, I didn’t really measure this. Would you have? Yeah right, you damn dirty liar.

While I worked on the veggies, Brian dismembered the chicken. I include this picture solely so I could use the word “spatchcock,” because I am 12 years old. 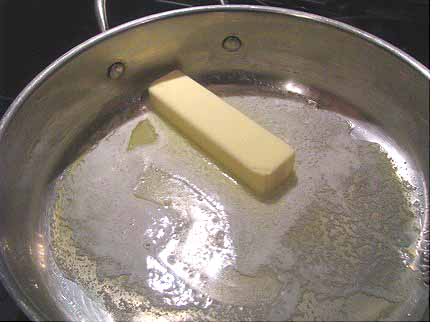 As with the potatoes, La Julia has a detailed agenda for the chicken; none of this season-with-salt-and-pepper-and-toss-into-a-skillet until done. When you cook chicken like this, you kill a Master of French Cooking in your heart. Instead, you must:

Follow her instructions to the letter and reap the booty: the most gorgeously-colored chicken you’ve ever made and a kitchen that smells like an entire Provençal village covered in butter, villagers be damned.

Waste no butter, want no butter.

When the chicken was fully cooked, we put it into the warming drawer to hold* while we made the sauce. The “wine-butter-egg yolk” thing does not do it justice, because what this really is is a schmaltz hollandaise. Sit with that for a minute.

So we added wine to the butter, chicken fat and fond left in the pan – ALL the butter, you don’t pour any of it off – and let the whole thing reduce; we also squeezed the now-softened garlic into the sauce. In a separate pot, Brian whisked egg yolks and lemon juice. After straining the butter-wine mix, it’s slowly whisked into the egg yolk. Once all the liquid is incorporated into the egg, the pot goes back on the stove to heat and thicken a tad. You also – I shit you not – whisk in MORE BUTTER. You know, to enrich things.

Look, it made sense in the moment.

*I would have just used the oven, but you know how it is – baking cucumbers and all. 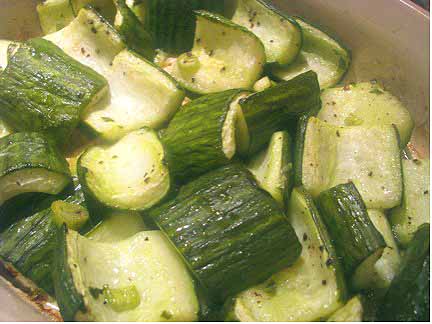 Meanwhile, cucumbers came out of the oven. There was still nothing to indicate that they would be good. I was impressed that they hadn’t completely liquefied, but they smelled like creepy warm pickles. And I don’t like pickles, which are just good cucumbers ruined.

But you know what they tasted like? Creepy warm pickles.

But everything ELSE was fan-fucking-tastic. The potatoes were gorgeously crusty and salty on the outside and soft and nutty inside. The chicken was tender and (duh) buttery, and the herb combination, which I’d been unsure about, melded into one glorious fragrance. The sauce was much thinner than a traditional hollandaise or bernaise and didn’t overwhelm the dish at all; in fact, it was the embodiment of umami. Savory and wonderful, with each mouthful more delicious than the one that came before. Every couple of bites, I had to stop and sigh a sigh of ultimate contentment.