I didn’t eat any of the vegetables, and I don’t feel guilty at all.

We’ve all had those days: you’re stuck at work later than you’d like, you’re tired, you’re not sure what you feel like eating, you don’t have the energy to conjure up that good ol’ pantry juju, and your kitchen still smells like pureed fish.

We all have go-to takeout for those days – pizza, pad Thai, General Tso’s chicken, bean and cheese burrito, whatever. Mine comes from Jersey City’s locally-famed Ibby’s Falafel: lamb shwarma, baba ganouj and a sweet, creamy namoura pastry to top it off.

Eggplanty goodness, all for me.

Ibby’s is well-pedigreed for a falafel joint: its owner and cook is a nephew of Mamoun, of the more-than-locally-famed Mamoun’s Falafel Restaurant on MacDougal Street in the West Village; Ibby’s also has the not-inconsiderable virtue of being within walking distance of my apartment. So I’d be a fan even if they stopped running their yearly 2-for-$4 falafel sandwich anniversary deal. (Note to owners: don’t.)

The falafel is tasty, as one would hope: perfectly sized, flecked throughout with ample amounts of fresh herbs, and, thanks to high turnover, nearly always freshly fried to order. It’s excellent stuffed into some above-average pita bread filled with wonderfully smooth and creamy hummus – consistently great, with a nice balance of chickpea, garlic and lemon, and the kind of smoothness it’s tough to achieve at home* – and pungent tahini sauce. (one must overlook the iceberg lettuce and wan tomatoes)(what do you want for $2?) It’s also great with the olive oily, just-chunky-enough baba ganouj.

If it’s dinnertime and I want something a little heartier, I almost always go for some variety of lamb shwarma platter – either straight-up lamb over rice (which necessitates a side order of baba, as we’ll see) or the combo platter, a tour de Lebanon featuring shwarma, falafel, baba, hummus and stuffed grape leaves.

*Unless you’re me, because I rule. 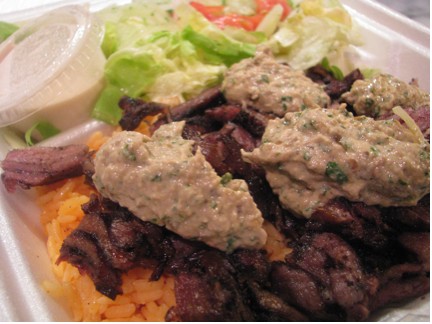 The proper way to eat a shwarma platter.

The side order of baba is necessary because the proper way to consume a shwarma platter is to dump the baba over the top and mix the lamb, rice and baba together into one delicious hash. If you have the combo platter, you should also dip the falafel into the hummus and trade your stuffed grape leaves for some of your dining companion’s shwarma, because can there ever be enough shwarma? (Obvious answer: no)

I’ll be honest and say that the shwarma is not always 100%. Sometimes you just get the counter guy who plates skimpy portions, sometimes the lamb itself is kinda gristle-y and overly fatty. Luckily, the rest of the time it’s rich and oniony and wonderful, and you can just cover up the inferior stuff with baba. Would that the rest of life’s problems could be solved by smearing them with dip. Although you know, there are probably more issues that could be taken care of that way than we think. 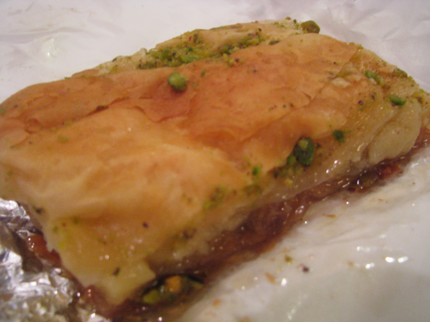 The namoura at Ibby’s is a honey-soaked affair of cream-filled phyllo lightly sprinkled with pistachios; namoura isn’t traditionally made with phyllo and usually includes coconut (and sometimes rose water), so I have to assume that this is an Ibby’s personal invention or regional specialty (Ibby’s is Lebanese).

I have no idea how they get the cream into the phyllo – it’s not piped between phyllo layers, it’s baked right in. Magic? A genie? I don’t know and I don’t care, because as long as I can pick a hunk of it up at Ibby’s for $1.50 I don’t have to make it myself. 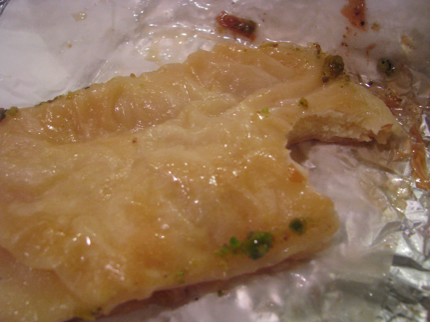 I always eat my namoura in a specific, methodical way. The phyllo layers peel apart easily so I remove and eat the crispiest top and bottom layers, leaving the soft, sweet, creamy center to be savored independently. I’m pretty sure this is the required way to eat one.

Ibby’s also has all the other Middle Eastern standards – tabbouleh, shish and kofte kabobs, ful madammas, and spinach pie, along with salads and a range of phyllo-and-honey based sweets. It’s more take-away than eat in, but there are a few tables and umbrellas set up outside so you can people-watch as you sip your Turkish coffee (or, if the hot brother is working that shift, brother-watch).