Some years I pre-gird my loins in preparation for Mothers’ Day; some days it sneaks up on me. Either way, Mothers’ Day sucks the fat one when you’ve got no mom.* Don’t get me wrong – I utterly adore my mother-in-law** and feel incredibly fortunate to have married into a family that I love as much as my own. But Mothers’ Day still has the power to make me pretty cranky, and in more than 4 of the past 8 years I’ve wanted to tell it to suck my metaphorical dick.***

You know what can make the day better? Getting into a four-car pile-up on the way to your in-laws’ because the assholes around you were too busy talking on the phone and/or rubbernecking at another accident that had happened less than 15 minutes prior.****  But that’s not what this is about.

*In that she passed away, not that I was asexually created from a single gamete.

***Which is fucking HUGE.

****5 minutes after our accident, while we were waiting on the side of the road for EMTs to show up and check me out, ANOTHER asshole caused ANOTHER three-car pile-up on the SAME stretch of road. 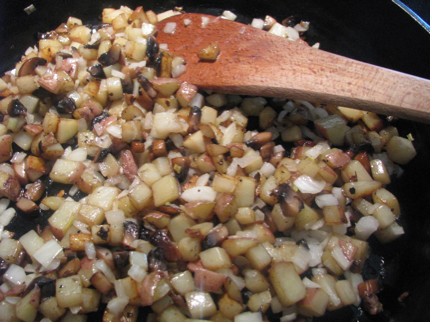 See how I tricked you? Because you THOUGHT I was going to say that this plate of food – duck hash and poached eggs over brioche – made my day better. I’d be lying if I told you that, because it would take something more like a chocolate-covered pork belly with a side of cheese grits and a mug of gin to make this day better.

But this breakfast was really, really good, and it shouldn’t have to suffer because of its temporal proximity to the day’s unfortunate events.

So: We had almost an entire breast’s worth of duck meat leftover from Thursday, along with a newly-accumulated trove of duck fat and some more new potatoes. As you can imagine, I had no choice but to make duck hash for breakfast.

One good thing: we discovered that 2005 Honda Accords are either made of rubber or impenetrable iron, because NO HARM WHATSOEVER befell the car.

Sadly, my head is not made of either of those two materials, and it hurts. Because it slammed into the headrest twice, and the padding on the headrest is apparently designed to disintegrate on impact so that your skull can smash directly into the metal framework. Or so it feels.

But before my brain was jostled around in my skull and possibly started leaking out through my sinuses (what other explanation can there be for the pain?), there was a cast-iron skillet containing a small amount of my precious duck-fat store, diced potatoes and mushroom, onion, and chopped leftover duck. The duck had been simply seasoned with salt and pepper during its original cooking, so I added a little more salt and pepper along with a touch of Chinese 5-spice; the warm, sweet components of the 5-spice (cinnamon, star anise) complement the sweet, rich duck and the hotter and more savory (ginger, clove, fennel) are a nice foil. Chinese 5-spice is like a seasoning panacea.

While the hash finished browning, I poached a few eggs, pulled some berries out of the fridge and clipped some chives from the herb garden. I also cut and lightly toasted a round of brioche to use as a base. 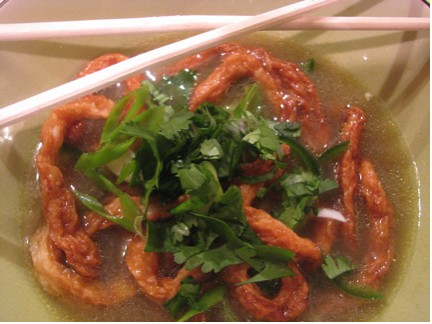 I am the fucking egg-poaching MASTER.

I cut the brioche to fit a ring mold, packed in some hash and gently placed a poached egg on top. Chives for color, strawberries to create the illusion of a more balanced meal. Crack into the egg to get some oozy yolk for an artsy-fartsy picture.

If we’re talking about just Mothers’ Day without any other calamitous situation, this breakfast would be enough to perk me up. The egg yolk makes a lovely, viscous sauce as it runs over the warm hash, coating and clinging to every little bit of potato and duck; the brioche was nice but unnecessary as a sopping mechanism. The hash itself was a little sweet, a little salty, a little meaty, a little starchy and a lot delicious – Brian doesn’t even like duck all that much, and he ate a pile twice as big as mine.

So happy Mothers’ Day to all of you who have or are mothers. And the rest of you are all invited to my apartment next year for duck hash and eggs.

0 thoughts on “The day went downhill from here.”