Speaking of appropriating: currently on my TV is a commercial for the Mohegan Sun casino with a jingle sung to the tune of “My Sharona.” Clever, or harbinger of the end of culture?

Cinco de Mayo: A day where office workers everywhere can gather at Mexican chain restaurants for happy hour and get smashed on frozen strawberry margaritas in honor of Mexican independence. Olé!

As the rest of us know, Cinco de Mayo is observed mainly in the state of Puebla and commemorates a victory of Mexican forces led by General Ignacio Zaragoza Seguín over the French in the Battle of Puebla on May 5, 1862, duh. I know General Seguín (or Iggy, as I like to call him) is probably a personal hero for many of you, as he is for me.

We observed this special day by dining on hardtack, as many of the brave Mexican soldiers would have.

We decided to skip 2 for 1 Coronas at Chili’s – the General deserves more, don’t you think? – in favor of a more intimate celebration at home: smoked chicken adobo and pico de gallo over corn and black bean fritters. We invited some neighbors, who suggested that we whip up some sangrita (a citrus-and-chile tequila chaser traditional to Puebla) as well. I’m certainly not one to turn down any beverage containing both onions AND grenadine, so we added it to the list.

The chicken (in the very first pic) couldn’t have been simpler. I marinated some leg quarters in orange juice and adobo seasoning and turned ’em over to Brian. Now that grilling season is upon us, I get to do a lot more kicking back at dinner time. Brian’s primordial lizard brain kicks in big time and he’s driven to cook as many things as possible over open fire; the chicken was slowly smoked with hickory wood (General Seguín’s favorite wood for smoking.*) 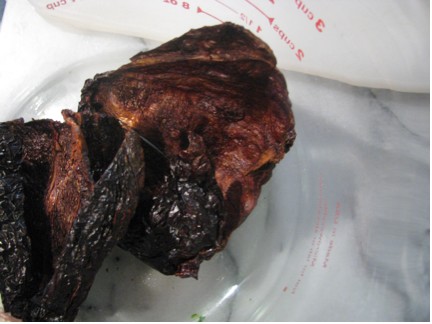 The sangrita came from a recipe provided by our neighbors. We thought that this was a favorite recipe that they’d used and enjoyed in the past; apparently, they’d never had sangrita before either and played us for the suckers we are to get us to make it. (And yet we fed them anyway.)

The ingredient list, I’m not gonna lie, was not entirely confidence-inspiring: Dried ancho chiles, orange juice, lime juice, salt, grenadine and raw onion. I know: the fuck? Shouldn’t “sangrita” be more like “sangria”? Apparently not.  There also seems to be some debate over whether or not sangrita should be tomato juice-based; the non-tomato recipe we were working from insisted it was the real Pueblan deal.

At the very least though, making sangrita provides an excuse to toast dried anchos, which sends out a gorgeous earthy, raisin-y aroma. Anchos aren’t terribly spicy, but their fragrance and taste are incredibly rich and comforting; even if you don’t enjoy them with your juice, do seek them out and use them for something. 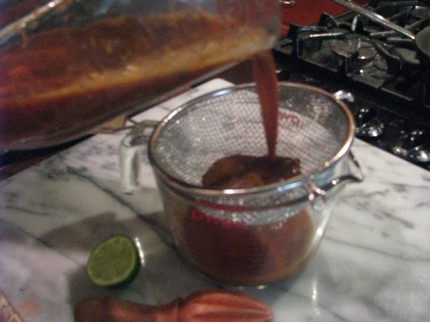 Doesn’t this look like something you want to drink? Maybe I’ll have the leftovers in a morning smoothie.

The rehydrated anchos go into a blender with all the other ingredients; they’re whirred then strained.

The directions instructed us to “adjust the salt as needed” at this point. Since we had no idea what this was supposed to taste like, I upped the salt to make the sangrita more aggressively salty, assuming that would go well with the tequila. What do I know? I don’t even LIKE tequila.

It would have been nice to have had a chinois to strain this, as there were little dark flecks of chile skin floating in the strained sangrita that made it look even less appetizing.

The sangrita then needs an hour in the fridge to chill and allow the flavors to meld. Which, coincidentally, is the same amount of time you need to acclimate yourself to the idea that you will be drinking it.  Fortuitous!

Actual sentence uttered while we were all eating: “Don’t tease my dog with your marshmallow stick.” I leave the interpretation up to you.

While the sangrita chilled and the chicken finished smoking, I put together the fritters and the pico.  My tomatoes were a little anemic-looking, but enough jalapeño and lime can save anything. Pico appears regularly on our spring and summer table, as it should on yours – some grilled chicken, a little pico and a salad, and you’ve got yourself a fresh, tasty and fast meal. I kindly refer you to this post for instructions. Thank you.

This corn? It is still frozen.

For the fritters I took a page from last week’s smackdown, which featured sweet corn fritters with thai chiles and curry paste. I Tex-Mexified (Mexicanified?) them by subbing in black beans for half the corn and flavoring the beans and corn with jalapeño, cilantro and a little chili powder, and used the same egg-and-rice flour mixture as a binder.

I’m too tired to Photoshop right now, but if I weren’t, this picture would be AWESOME.

I fried ’em up in some canola oil. Meanwhile… 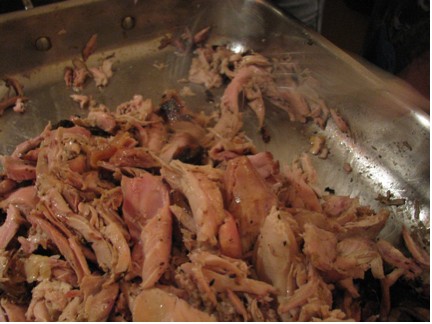 Behold the forks of fury! I know, they’re a little hard to see – it’s because they’re moving so fast, mercilessly shredding the smoked chicken with a frightening single-mindedness. But look closely, and you can just see their ghostly outlines.  They can kill without being seen! They are too subtle for your mind!

A lovely by-product of chicken smoking for a crowd is the delicious, delicious skin that comes off of 9 leg quarters…I might have ruined my appetite a bit here. Thankfully, a new appetite always appears on the tails of a ruined one. I heated some tortillas and grated some cheese, and we hied to the patio with a sixer of Negro Especial to eat.

Which we did with great gusto befitting General Ignacio Zaragoza Seguín’s stunning victory.* The chicken was moist and tender, salty and sweet, gently seasoned, and unmistakably smoky. The fritters were sweet and crisp, with a slight bite from the jalapeño. The pico cloaked everything in its incredible freshness – sweet tomatoes, sharp onion, tangy lime, hot and fruity jalapeño – and a dollop of sour cream provided a hint of taming richness.

The sangrita was…interesting. Our neighbors brought some tequila reposado – it’s aged, so it tastes slightly less like fire than regular tequila. We sipped the tequila and sangrita, alternating. The sangrita was just not quite there. Not quite salty enough, not quite spicy enough, not quite acidic enough. Sipping some after the tequila, I understood the concept of the sangrita, – kind of bloody mary-esque, but chile-based rather than tomato-based and a little sweeter – but the reality was a bit off. (The recipe below is altered to rectify the not-quiteness). If anyone has more to say on the topic of sangrita, please share.

*Note: I don’t know if it was actually stunning. Possibly it just had a good personality.

Prepare the chiles: Cut them open and remove all the seeds. Heat a non-stick skillet or cast-iron pan over medium-high heat and add the chiles, pressing down with a spatula so they have maximum contact with the pan; they’ll start to pop. When they’re fragrant – they’ll smell like raisins – they’re done. Remove them from the pan and soak them in hot water for 20 minutes to rehydrate.

Add the chiles and all the other ingredients to a blender and blend until smooth. Pass through a fine-mesh strainer to get out as much of the chile skin as possible.

Chile for at least 1 hour before drinking. Serve side-by-side with a sipping tequila.