This red snapper wants to be taken to your leader.

by everyone’s favorite British scruffmuffin, Jamie Oliver. Because it’s a method I’ve been wanting to try, and it seemed like a pretty straightforward dish to prepare after a long day on the road.

Before beginning, I’d just like to say that (1) it took roughly 1000 hours 7 hours to get from Boston to New York this afternoon, and I have NO IDEA WHY*, and (2) I had one of the most memorable meals of my life last night at No. 9 Park, and I’m still somewhat intoxicated with the food and hung over from the cocktails. I’ll tell you all about it soon, but for now, I’ll just leave your with these words: prune-stuffed gnocchi in a vin santo – foie gras glaze.

The upshot of all that is that I’m really too tired to be trying to cook anything other than a Hot Pocket, AND anything I ate today was bound to fall short of the memory of last night. But a promise is a promise.

*Okay, part of the reason is because I sent us on a wild goose chase in central Connecticut looking for a nursery I’ve been wanting to visit. But even aside from that, it took a really long time. 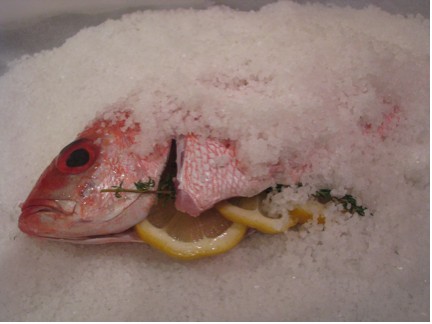 Soon, the red snapper army will come to avenge this poor soul.

On the way home from Boston we stopped off at Corrado’s Family Affair, a massive grocery store and shopping complex filled with foods from around the world of questionable age and provenance, to pick up a whole fish. If you live in the Northern New Jersey area and have not had luck finding a place where you can buy pig snouts, off-brand Nutella, fresh homemade ricotta AND balsamic vinegar in 5-gallon jugs while also taking care of some banking and picking up a few bags of mulch and a new privet for the backyard, you have obviously not been to Corrado’s.

They had at least 12 varieties of whole fish available. We decided to go with red snapper, and I selected the specimen with the clearest and most judgmental eye. We also picked up 8 pounds of salt. Apologies to Jamie Oliver for my failure to catch, kill and gut the fish myself, and for my decision to purchase salt rather than harvest it myself from the sea. It’s been a long day.

We entombed the first invader in this salty grave, Cask of Amontillado-style.

Jamie tells us to keep it simple. He rubs the fish with olive oil and recommends filling the cavity with rosemary and thyme. I decided to go with thyme and lemon; I find it’s just too easy to overwhelm fish with rosemary.

The salt crust is also simple: Rock or sea salt (I used sea) mixed with a few eggs whites that have been beaten to soft peaks and some water until just barely moist. I laid a half-inch layer of salt on a parchment-lined pan, added the fish and heaped the rest of the salt on top. The fish went into a 400 degree oven for about 20 minutes while I neglected to make any kind of side dish because I was dreaming about the prune-stuffed gnocchi. Did I mention the vin santo-foie gras glaze? 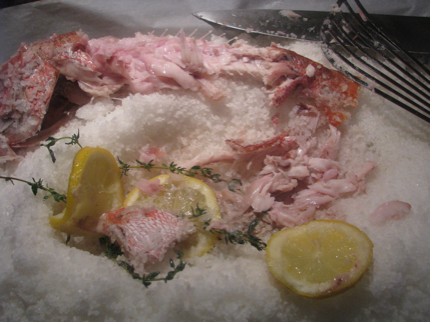 The fish dashed itself to death trying to escape from its hot salty casket.

About halfway through the cooking time, the kitchen started to smell really good – fresh and lemony. I took the fish and salt out at the 20-minute mark and left it to rest for a few minutes before cracking the salt crust open.

Unfortunately, I didn’t so much “crack the sale crust open” as “plunge my hand into several inches of warm, moist, decidedly non-crusty salt, sticking my thumb into the hot gooshy fish eyeball in the process;” I suspect the egg white-to-salt ratio was off and there wasn’t enough glue to hold the salt together. I unearthed the fish and brushed as much salt off the skin as possible and then called Brian to do the actual fish-disassembly, hoping to draw on several weeks’ experience working in the Pathmark seafood department during college.

Please note that Jamie Oliver told us we could use whatever kind of fish we wanted. For the record, after trying to pry the fillets from the snapper, I re-read the recipe and did not see an annotation warning me against red snapper. Which there should have been, because we completely mauled the fish trying to pry it away from the backbone; two-thirds of the fish was still clinging to the bones, and the parts that we did manage to get on a plate were filled with annoying little pin bones.

We did eat some, and it was delicious – perfectly seasoned, perfectly moist, fresh and clean tasting with the subtle perfume of lemon and thyme – but we were too tired to work that hard for some fish. So I had a big hunk of crusty bread with Nutella and called it a night.

And you know what? I don’t really care. Partly because I’m tired. But mostly because I can’t stop thinking about last night’s dinner, and I can’t wait to tell you all about it. Tomorrow.