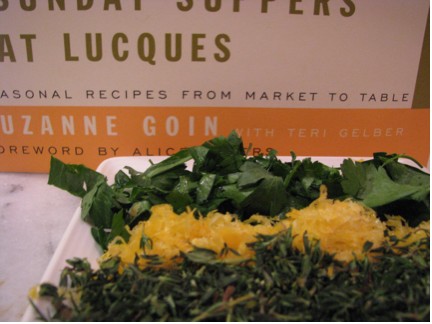 Step one: Cut a hole in the box.

I’m sorry, but I had to get that out of the way. I burned the HOLY HELL out of my right middle finger pulling a burning hot pan out of a 425 degree oven. THROUGH THE GODDAMN POTHOLDER. Not only am I right-handed, but that’s my prime birding finger, y’all. So you’ll have to excuse a shorter-than-usual post and some sub-par photos. I’m working one handed here, and it’s not because I’m doing anything fun with the other one.

Still, I managed to power through and produce saffron chicken with spring onions, snap peas and pea shoots and parmesan pudding, from Susan Goin’s Sunday Suppers at Lucques

. You heard that right: cheese pudding. It was almost good enough to make me forget the throbbing pain in my finger. Almost.

Step Two: Put your junk in that box.

Before you can get to the cheese pudding, you have to prep the chicken. Thyme, parsley, lemon zest and olive oil infused with ground saffron.  Toss into a plastic bag. The saffron stains the chicken a gorgeous marigold as soon as it hits the skin.  Try not to pierce a hole in the bag because you accidentally bought bone-in chicken.
Note for chefs: It’s a lot easier to dice the herbs if you don’t have a giant fucking blister on your right middle finger.

The roux is shrouded in mystery. 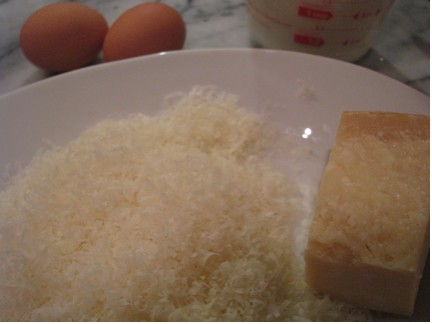 Screw those happy California cows – I only buy cheese from angry, jilted cows.

Before the white sauce comes to a boil and thickens fully, some egg is whisked in, followed by the cheese. Suzanne has you whisk the egg directly into the hot sauce but I didn’t trust myself, so I tempered the egg a bit first by whisking in about half a cup of the sauce. I also added a little black pepper and nutmeg to the sauce. It wasn’t in the recipe, but I assumed it was implicit.  Cream sauces and nutmeg just go together, like Laurel and Hardy, or Rachael Ray and abnormally high-waisted, tight-fitting denim.

I only wish the pain of my enormous throbbing blister could be half as implicit as the nutmeg.

In any case, the pudding went into the oven in a water bath for about an hour. During which I hid downstairs because there was a condo association meeting going on upstairs and I don’t like hearing about how decrepit my apartment is.*

*Very decrepit.  But at least it’s my decrepit hovel. 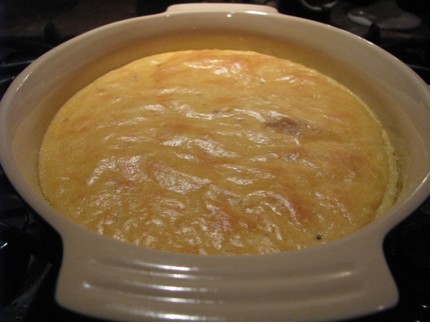 Cheese pudding. I rest my case.

I’d been planning to scatter some additional shredded parm on the pudding for the last few minutes of baking to get a nice crust on top but the pudding had self-crusted in the oven, much in the same way that my fingertip probably will in a few days.

Chicken in a pan, prior to said pan trying to kill me. 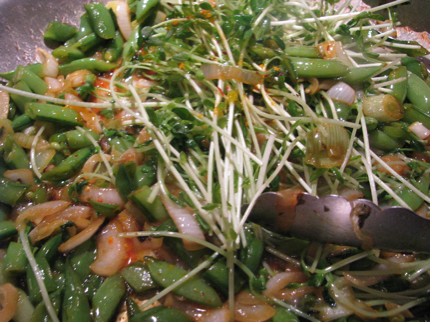 Vegetables in a pan, after said pan’s vicious and unprovoked assault on my fingertip. Notice that the pan does not appear repentant in any way. Fucking snide-ass All Clad.

The chicken exits stage left, and the onion, snap peas and pea shoots enter, along with some more fresh thyme and saffron butter. I left some of the chicken fat in the pan too. For extra flavor, NOT because I couldn’t lift the pan to pour it out. The veg stays in the pan just long enough to become crisp tender and bright green.

This dish isn’t a blow-you-away dish, but it’s solid. I might brine the chicken breasts next time for some extra juiciness, but the herb and saffron rub is flavorful and the colors are fun and fresh; the saffron-stained chicken skin was gorgeous, and I got Brian to give me his chicken skin out of pity. The veg tasted green – they tasted like Spring feels. They were a great counterpoint to the silky, cheesy pudding, which was lighter than I’d thought it would be. Much like my scorched finger is far, far more painful than I’d thought.