You know you want it, baby.

Traditionally, Bolognese sauce is an all-day affair, which is why most people only make it on weekends if they make it at all. I reject that, because when I want a big pot of meat, I want it right fucking now. Also, because the recipe in The Silver Spoon

, doesn’t have you simmer it all that long, and that book don’t lie.

This version veers even further into heterodoxy with the substitution of ground lamb for ground veal, and a pinch of cinnamon to play off the lamb and add a touch of non so che cosa (that’s je ne sais quoi, or “what the fuck is that?” for you non-polyglots). I’ve done it with veal and it’s good, but the eyes of a thousand baby cows haunt my sleep. Fully-grown animals, not so much.

Meat logs! Normally I would carve faces into them, but I want to keep this a classy joint.

The base of the sauce, as in many a nonna’s recipe, is diced carrots, onion and garlic, sauteed in olive oil (or as my nonna calls it, EVOO)* until fragrant. The meat logs are then added and browned; make sure you use a pan large enough to accommodate yer meat logs, lest they stew in their own juices. The more browning you can achieve, the better you are as a person the more flavor.

*Kidding! Kidding! Don’t strike me down with your Italian nonna mind powers! 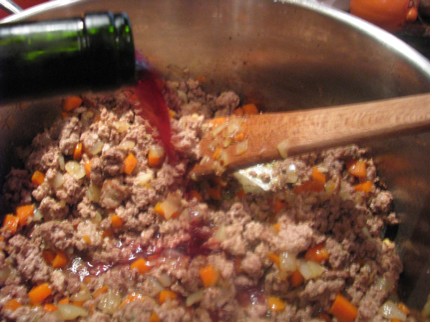 Look at how I managed to take a picture of the pot with my right hand while pouring the wine in with my left! I’m a fucking WINNER.

You can use white or red; I’ve done both and both sauces were yummy. Use something that you like to drink and not that crap that your cheap friends brought over the last time you had a party. You’re going to have half a bottle left over. If you’re a teetotaler, you can use stock to deglaze the pan instead. 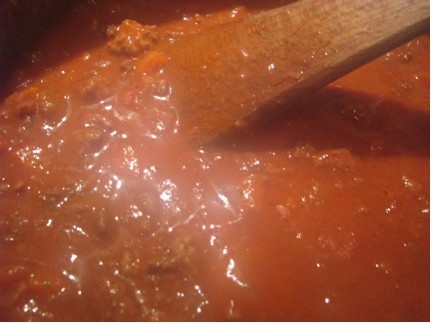 The most important part is the liquid: a cup of whole milk and a 24-ounce bottle of good tomato puree. Not tomatoes from a can, not a jarred sauce, but bottled puree. This is what my mom used and what my nonna and zie (aunts) – actual Italian people in Italy – all use. And their sauces are so righteous that they could smite a heathen at 20 paces. You can find it in specialty stores or larger grocery stores; Whole Foods has an organic brand that I like. Do look for it, and keep a few bottles on hand at all times for quick and delicious ragus. Salt, black pepper, thyme and a pinch of cinnamon round out the flavor here.

Here’s the best part: The whole process to this point takes 20 minutes or so. Now it’s time to simmer, and you can let it go for as long or as short as you’d like. The longer you let it cook together the more reduced and meaty the sauce becomes, like meat with a little sauce; if you opt for a shorter simmer, you’ll have a saucier sauce. Either way, it will taste damn good. 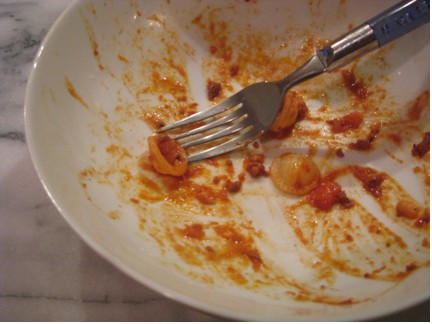 The remains of the day.

I let the sauce simmer for about 45 minutes (still considerably less than the half-day process often associated with Bolognese) until it was quite thick and reduced and served it over orechiette with copious amounts of grated piave. I ate a lot of it. I also brought it for lunch the next day, and had to fight not to eat it for dinner as well. It’s a traditional tasting, rich meat sauce; the carrot adds some sweetness to cut the acid in the tomatoes, and the hint of thyme and garlic is all the seasoning that’s needed. The combination of meats adds still more depth, with the lamb contributing a rich flavor. The cinnamon isn’t discernible as such, just as a warm, slighly spicy, fragrant note that tempers any gaminess in the lamb – you know something is different and you don’t know what, but you know you like it.

Heat the olive oil over medium heat in a wide saucepan. Add the onion and carrot and saute until tender, about 8 minutes; add the garlic and saute 2-3 minutes more.

Turn the heat up to medium-high/high and add the beef, pork and lamb. Brown the meat well, breaking up the meat into little chucks.

Pour in the wine, scraping the bottom of the pot to get all the tasty brown bits up. Let the wine reduce to practically nothing.

Add all the remaining ingredients; stir to combine. Adjust the seasoning with salt and pepper. Simmer to your desired consistency; at least 20 minutes.

29 thoughts on “You can't beat this meat with a stick: Quick Heretical Bolognese”