None of these ingredients is in the Faux-Romesco sauce. Did I just blow your fucking mind?!?

I’ve always been attracted to mixes of sweet and savory, both combinations of the two or flipping recipes around – making sweet versions of things that are usually savory, and vice-versa. Not everything lends itself to this treatment – there have been some attempts whose names shall not be mentioned – but it can be a great way to get yourself out of a cooking rut. One of my all-time favorite flips is savory bread pudding. 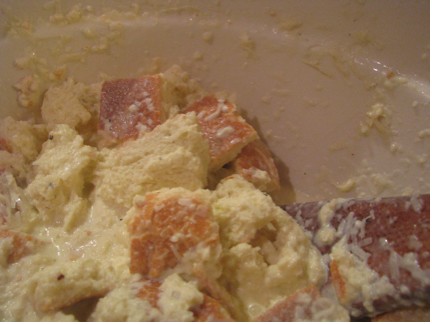 Of course, I *love* sweet bread pudding; plain, with chocolate, with fruit, with sauce, without sauce – anything except raisins, because cooked raisins irrationally creep me out. I make a killer (if I do say so) flan-inspired bread pudding with a caramel layer in the bottom of the baking dish that makes a spectacular sauce as the pudding bakes. Good times. Remind me to tell you about it one day.

But savory bread pudding has become one of my new comfort foods, nipping at the heels of mac and cheese. It’s warming and creamy, simple to make and endlessly variable. With basic custard proportions in hand, you can vary every other element of the pudding, from the bread to the seasoning to the mix-ins. It can be mild or spicy; meat-filled or vegetarian. You can make it and have a week’s worth of lunches, or serve it at a weekend brunch for a crowd. It can be breakfast or lunch or dinner. It is omniscient and omnipresent. Okay, maybe not the last part, but the rest is totally true.

For this edition, meant to be paired with a simple green salad for lunches, I decided to go with a Spanish-style pudding of chorizo, manchego cheese and mushrooms caramelized with sherry, with a simple hearty white bread as the base.

(Halfway through, and I haven’t said anything about this so-called “faux-mesco sauce.”)

Picture that is perhaps more appropriate for a quote about a milkshake, as it actually depicts a liquid.

No, I haven’t. Pairing the bread pudding with a simple salad helps lighten things up, but I wanted to do something else to cut the richness of the custard and cheese. I thought that some Romesco sauce – a classic Spanish sauce made with roasted peppers and ground nuts, usually with a mayo-style base – would be an interesting addition, but I wanted something simpler and lighter. Ergo: Faux-mesco.

I made a 2-minute blender sauce using some of the traditional Romesco ingredients: nuts, roasted peppers, capers, red pepper flakes, olive oil and sherry vinegar; boosted the flavor a little with some lemon juice and smoked paprika; and thinned the sauce out a little with some chicken stock. The flavor wasn’t quite as robust as I’d been shooting for, so I took a page from Mexican and Indian cooking and seared the sauce in a scorching hot pan.

While it was searing, I devoted some serious mental energy to coming up with “faux-mesco,” and I hope you appreciate it. Catchy, isn’t it? No, it’s not, and Rachael Ray irritates me more than people who stop at the tops of escalators (the giggling…dear god, always the infernal giggling). In any case, the searing worked perfectly. 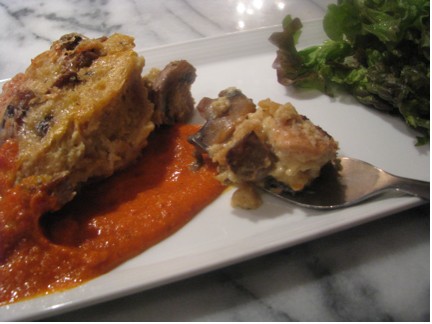 Although this is meant to be lunches for Brian and I, I couldn’t not taste and photograph, could I? You’re special to me, and I wouldn’t do that to you.

The bread pudding is like getting a bear hug from an old friend. Soaking the bread in the custard before baking produces a truly pudding-like texture, but the crustier pieces from the hearty white loaf I used provided texture. The cheese contributed to the creaminess, and the sausage and mushrooms added punches of smoke and salt. The blender Romesco had a vegetal sweetness from the roasted peppers that melded nicely with the custard, but an edge from the capers and sherry vinegar that cut through the richness kept the pudding from being totally overwhelming. A simple green salad lighly dressed with EVOO olive oil and sherry vinegar rounded out the plate.

I could just have easily used Italian sausage, mozzarella and spinach in the pudding and topped it with tomato sauce, or made a totally veggie version. The only limit is YOUR IMAGINATION!! (cue inspirational music)

Mix the milk, cream, eggs, s&p and nutmeg in a large bowl. Cut the bread into 1 1/2 inch cubes and add it to the milk mixture. Toss to combine and let soak for 20-30 minutes, stirring occasionally. Pre-heat the oven to 325.

Meanwhile, saute the chorizo over medium-high heat until browned, about 8 minutes. Remove the chorizo from the pan; if there’s more than 2 tablespoons of fat, remove the excess. Add the mushrooms to the pan and saute until brown, about 10 minutes. In the last few minutes of cooking, add the sherry, scrape up any mushroom/chorizo bits stuck to the pan, and reduce to a glaze for the shrooms.

Stir the chorizo, mushrooms and 4 ounces of the cheese into the bread and milk mixture, and scrape into a baking dish; sprinkle the other 2 ounces of cheese on top. Bake for 45-50 minutes, turning on the broiler for the last 2 minutes to brown the cheese. Let rest for 5-10 minutes to set before eating, if you can.

Put all the ingredients in a blender. Whiz until smooth, about 1-2 full minutes. Taste and adjust salt and pepper; add more lemon if the sauce needs brightness.

Heat a large saute pan over very high heat. Pour the sauce into the pan; stand back, because it will spatter. Sear the sauce, stirring with a heat-proof spatula to make sure all the sauce contacts the bottom of the pan, for 2-3 minutes until slightly thickened.