A total coincidence, Valentine’s Day and the Thursday Night Smackdown are one and the same this week. It’s my beloved’s turn to pick the meal this week; he has a strong sense of sentimentality, so naturally he’s chosen a playful, romantic meal filled with luscious flavors, rich textures, and aphrodisiac ingredients: Fried chicken, green beans and sweet potato casserole.

Don’t worry, I know how lucky I am. Hands off, ladies.

You give lard a bad name.

Q: What says romance more than a cast iron skillet full of lard? 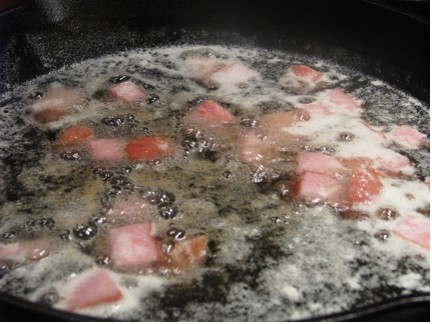 I’m hooked on a feeling, high on a pan full of lard.

A: A pan full of lard mixed with butter in which cubes of smoked ham are frying.

I mock because I love, I fully stand behind his choice of chicken. After all, you’re talking about two people who exchanged rings and made a life-long commitment over grilled cheese sandwiches and mashed potatoes (they were REALLY good sandwiches).

It might not seem as though fried chicken is new or exciting enough to qualify for a Smackdown, but heavy duty frying is not something we every really do around these here parts so it’s a new method for us. Plus, being from New Jersey we’ve rarely (or never) had non-KFC fried chicken and had to assume that the homemade thing would be worlds better. I also have a soft spot for fried chicken from my youth; it was a forbidden all-American horror in my very Italian household (along with meatloaf and ranch dressing), and was consumed only when we would visit my father’s Roy Rogers-loving relatives.

by Scott Peacock and classic Southern cook Edna Lewis. So we decided not only to do fried chicken, but to do it up right. For Miss Edna, this means frying the chicken in a combination of lard and butter flavored with country ham – the ham spends nearly 45 minutes simmering in the fat before the fat is deemed ready. If you can make it through the description without clutching your breast and keeling over, you can make it through the real thing.

When the moon hits your eye like a big chicken thigh, that’s amore.

Before you get to the fry-gasm, you have to prep the chicken. Most recipes just have you soak the chicken in buttermilk, but Miss Edna’s momma didn’t raise no fool, so she has you brine and then marinate. The brining ensures that even the white meat will be flavorful and juicy all the way through (in fact, we almost always brine chicken breasts before we cook them, no matter what cooking method – just throw them in some really salty water the night before you plan on using them).

Chicken rushes in where wise foods fear to tread.

The chicken is dredged in seasoned flour and corn starch; Miss Edna directs salt and pepper only, but we cheated and added pinches of cayenne and smoked paprika as well. Then it goes for a 20-minute dip in the ham fry, where it starts browning within seconds.

If you stand too close to the pan of bubbling ham fat, I do believe it is possible to gain weight by inhaling airborne fat particles.

If you’re lost, you can look, and you’ll find green beans – time after time.

There were veggies prepped at some point as well – sweet potatoes boiled and green beans blanched in boiling salted water. The potatoes were meant to be baked, but sweet potatoes take a shitload of time to bake and I don’t live the life of leisure I assume Miss Edna leads. I mashed them up and mixed in some egg (also a departure; I thought it would be interesting to have them be more casserole-y).

Although you’d think the veg would be less interesting than the ham-fried chicken (at least, that’s what I would think), the side dishes actually challenged my ideas of what Southern cooking is. The green beans are sauteed with butter and plenty of garlic, which was unexpected, and the sweet potatoes are exotically scented with cardamom and nutmeg.

The chicken didn’t look as perfect as the KFC of my youth, but I took its aesthetic irregularity as a sign of character.

I love you, I honestly love you.

There’s really no way to plate fried chicken, green beans and sweet potato casserole other than heaped on a platter (the cornbread was a total cheat; I grabbed it while on line at Whole Foods picking up the ham this afternoon). Ideally, the platter would be on a picnic blanket in the middle of a meadow, but it’s 34 degrees here so we opted against that.

The fried chicken was probably the best fried chicken I’ve ever had. It was moist and perfectly flavored, and the skin was wonderfully crisp; there was no heavy coating of breading or batter to overpower the chicken. I didn’t taste any overt hamminess, but then I didn’t think I was supposed to – just plenty of rich salty chicken-y goodness. The green beans were pretty garlicky but not aggressively so, and the garlic’s spark was a welcome counterpoint to the rich fried chicken. The cardamom gave the sweet potatoes an intoxicating flavor and aroma, although next time I might run the sweets through a ricer to get a smoother, less fibrous texture (as Miss Edna suggested).

The true test comes tomorrow, when I eat leftover fried chicken for lunch – at room temperature. But so far I have no reason to doubt Miss Edna. I can only hope I’m hungry again by then; I may not know much about Southern flavor, but I know that ham-fried chicken sticks with great tenacity to one’s ribs.

UPDATE: The chicken passes the room temperature test – dare I say that it was even better?

0 thoughts on “Valentine's Day Smackdown: Who's your Fry Daddy?”