Oh baby, baby; how was I supposed to know?

Tonight, live at the civic center: soy-glazed duck with portobellos, and soba noodles, spinach and radishes with ponzu sauce, all courtesy of Charlie Palmer’s Practical Guide to the New American Kitchen

This week was my pick, and I went with this because I *love* duck, and I’ve never made it at home. Brian is not such a huge duck fan because he doesn’t like things that are good, nor does he particularly like things that are sweet, perhaps because he believes eating should be painful. Who can say? So I went with this recipe because it’s a departure from the usual orange or plum-glazed duck dishes, in the hopes that the Asian-inspired flavorings and soba noodles would compensate for the duck. Don’t you hate it when people try to make you eat duck? I know I do. Oh wait, I’m thinking of someone else. 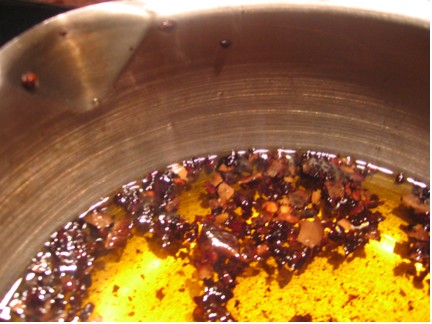 Oh pretty baby, I shouldn’t have let you go.

Before approaching the duck, we had to make the ponzu. It’s hard to resist the temptation to write “gonzo” or “bonzai” for ponzu, so I want you to appreciate how hard I’m working here. It’s also hard not to yell “Judo chop!” every time you say ponzu, and I’m discovering that the same holds true when you’re writing it.

Our ponzu was a little more rushed than Charlie Palmer would have preferred (sorry, Charlie!), because I neglected to read the part of the directions that instructed me to let the ingredients steep until cooled to room temperature and therefore failed to get a head start on it because I was busy napping on the couch. So ours was more of a 30-minute ponzu: veggie oil steeped with some chili flakes and cayenne to make a chili oil, then mixed with soy, sesame oil, lemon juice, water, cumin, peppercorn and a large dose of “please cool quickly, we are very hungry.”

I cannot overemphasize the importance of good sesame oil, it’s really a dish maker-or-breaker. Okay, that’s something I could actually overemphasize quite easily, e.g., “Good sesame oil helped the Allies. win the Second World War” or “We would not have discovered a cure for Polio if not for good sesame oil.” But it’s still really important. Buy in small amounts, and store in the fridge so it doesn’t go rancid. If you have some lying around but it’s more than a year old, hold a memorial service for it and go buy a new bottle. When you open the bottle, the smell should hit your nose without your having to put your nose directly against the bottle top and snorting. 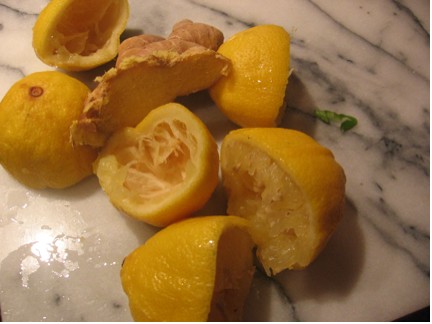 I must confess that my loneliness is killing me now.

And I must confess that I did not actually measure the amount of lemon juice or ginger that went into the gonzo ponzu, because sometimes cooking is like that and you just throw crap into a pot.

In any case, some amount of all the listed ingredients went into the ponzu pot and were brought to a simmer. I tasted it and felt like it lacked a little balance (don’t hurt me, Charlie Palmer), so I added a few tablespoons of sugar. (If I’d had more presence of mind, I would have used maple syrup.) I turned off the heat, covered the pot and left the ponzu tea to steep.

But don’t you know, I still believe!
(NOTE: do not lick screen)

The duck had been chilling in a marinade of soy, honey, cinnamon and star anise since the night before. Unfortunately, I hadn’t been able to find the moulard duck breasts Charlie recommends (I didn’t mean it, Charlie!), and had instead purchased a “duckling” of unspecified variety, which I made Brian break down for me. The breasts looked a bit less meaty than moulard, although they were every bit as fatty. On the plus side, there are duck legs now residing in our freezer that speak to me in the night: “Casosulet,” they call softly. “Cassouleeeeeeet.”

In any case, the duck went into a hot pan and immediately began releasing delicious, delicious duck fat into which I heaped the portobellos before banishing the pan to the oven to finish roasting.

That you will be here. Give me a sign!

Duck taken care of for the moment, it was time to deal with the noodles. Since the radish and spinach (which was supposed to be arugula, which I can’t stand, and also I forgot to get carrots, please be kind, Charlie Palmer) are left raw, the main obstacle was to successfully cook the soba and toss the noodles with the veg and ponzu (“Judo chop!”) without having them clump into one buckwheaty, yammy mass. Charlie Palmer instructs you to drain the noodles and immediately sink the entire colander into an ice bath. We didn’t have a bowl large enough to accommodate our colander so we just ran the noodles under cold water, which worked just fine.

Hit me baby one more time.

Meanwhile, the duck came out of the pan and was resting while we caramelized the mushrooms a bit more in the duck fat. You may want to re-read that: mushrooms cooking in duck fat. Mushrooms. Cooking. In. Duck. Fat. Oddly enough, you can also find this phrase under both “magically delicious” and “angioplasty” in the dictionary.

There was lots of precious duck-and-mushroom fond in the pan that it seemed a shame to lose, so we tossed some sherry in to deglaze – not enough to make a sauce, just enough to get all the good bits up and glaze the shrooms.

Nearby, a hound bided his time (bode his time?). But all would be for naught.

The de-clumped noodles met their new roommates, the mushrooms came out of the pan and the duck was sliced attractively on the bias with a dull steak knife. The small-ish duck breasts had cooked more quickly than I’d anticipated and weren’t as hot as they could have been; I was also worried that the short cooking time might not have been adequate to render out all the fat. But despite the temperature issue and the skin, which had moved very quickly from “crisp” to “black” thanks to the honey in the glaze, we seemed to be in good shape.

Hit me baby, one more time.

The duck was cooked perfectly, had lost most of its subcutaneous fat and still had delightfully crispy albeit slightly blackened skin. It could have stood to spend a little less time in the salty soy-based marinade, but still rated high on the yum scale. The mushrooms were everything you’d think a portobello cooked in duck fat would be.

It was the noodles and the ponzu that were the real revelation: a perfect balance of flavors that cut right through the obscenely rich duck and mushrooms. Gentle heat from the chili oil, peppercorns and fresh ginger, bright acid from the lemon, salt and depth from the soy and cumin, all shot through with a pronounced sesame flavor and perfume. If Brian were not already married to me, I think he might try to sail into international waters and marry these noodles.

Luckily, the ponzu recipe makes enough sauce for several tons of soba noodles, so there will be more of this dish in our futures. Any veg you have lying around could be tossed in. The duck marinade would also work really well with chicken thighs or a pork tenderloin, making this dish a nice quick weeknight option.

There is unanimous consent that although the pan-seared halibut with poblano vinaigrette and yellow-pepper hominy has been the best all-around Smackdown meal to date, the soba with ponzu is the best single item we’ve eaten; they will doubtlessly enter into regular rotation.

The verdict: Us 1, Food 0, Special Recognition Award to the soba noodles

Meanwhile, toast the cumin until it becomes fragrant, and roughly crush it with the peppercorns (a mortar and pestle is perfect for this). Add the crushed spices and all the remaining ingredients to the chile oil and bring to a simmer.

Once the mixture comes to a simmer, take it off the heat, cover the pan and let it steep until it comes to room temperature. Strain the sauce, making sure to press on the solids to get every bit of ponzuy goodness out. Stores in the fridge for a really long time. Great for noodles, on fish and for dipping dumplings. Makes a lot, but keeps in the fridge for a good long time.